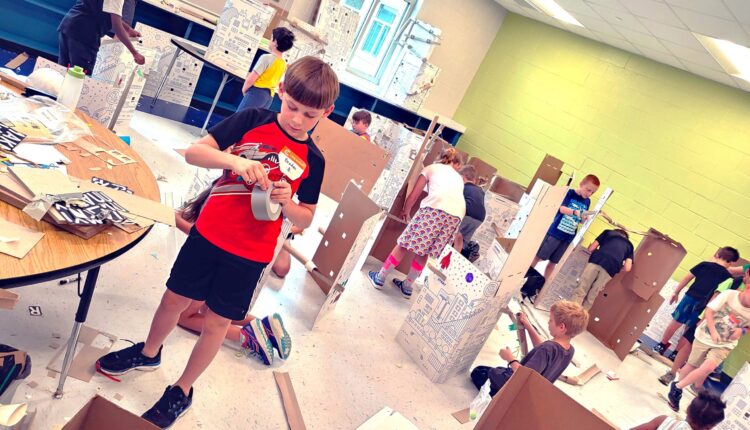 MADISON – Using unfettered imaginations, youth at Camp Invention engaged in a high-energy, action-packed week in modules that built on an idea.

After virtual camps for two years, Wendy Tibbs was elated to conduct a live, in-person camp at Midtown Elementary School. A National Board Certified Teacher, Tibbs is Midtown’s Gifted Specialist.

For this camp, however, they had to start ‘from scratch’ with new parent volunteers, campers and layout. “We figured out how best to share the building with two other camps, recruit high-schoolers and explain camp structure to parents and students,” Tibbs said.

Camp leaders included six Madison City School teachers, an MCS tutor and a former Huntsville teacher. “We were excited to have teachers from elementary, middle and high-school levels. We had a director, two assistant directors and MCS teachers,” Tibbs said.

For veteran campers, Camp Invention accommodates in giving back. Seven middle-schoolers returned as “LiTs” or “Leadership-Interns-in-Training.” Ten high-schoolers were volunteers, called Leadership Interns or LIs, with pre-camp orientation and online training to serve like ‘camp counselors.’

Student leader Camille Farmer was surprised to have fun watching the children “make whatever their incredible imaginations could dream. They weren’t thinking about how practical it was. . . just having fun with no fear of failure. I forget to enjoy (completing a project) and learning from my mistakes.”

Another leader, Aubrey Anne, “loved Camp Invention as a kid . . . (especially) the leaders. I wanted to be a part but the other way this time.”

“Our parent volunteers were amazing,” Tibbs said. “They did everything from helping with carlines, daily sorting upcyclables and helping at lunch. These camp volunteers were Jan Anderton, Deborah Delano, Lauren Everson, Allison Finley, Amy Palmer and Melinda VanZoeren.”