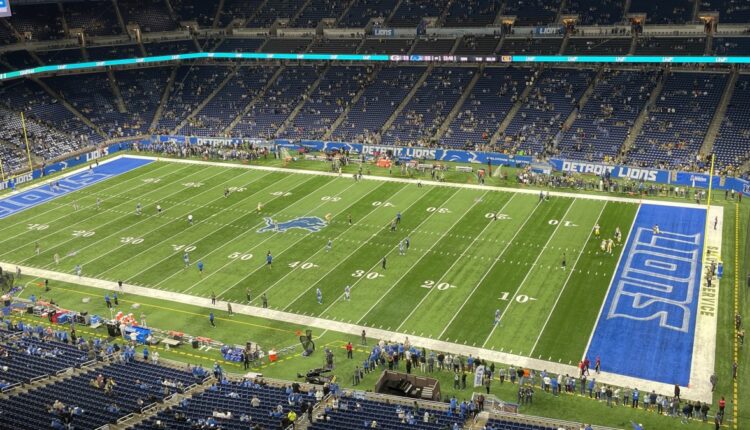 DETROIT – The Green Bay Packers (3-5) have lost four in a row. The Detroit Lions (1-6) have lost five in a row. Something will have to change on Sunday at Ford Field. Follow along all day for updates.

– Rookie Quay Walker and Krys Barnes were in the huddle for the No. 1 defense for warmups. Barnes just returned from injured reserve with an ankle injury and immediately vaulted ahead of Isaiah McDuffie, it appears. Walker will wear the communication helmet. He discussed the challenge this week – and it’s not what you think.

– Kicker Mason Crosby was wide right from 52 yards but split the uprights from 52 and 54 on his final kicks of his pregame routine.

– The No. 1 offensive line, indeed, will be together for the first time. During warmups, it was left tackle David Bakhtiari, left guard Elgton Jenkins, center Josh Myers, right guard Jon Runyan and right tackle Yosh Nijman.

– Running back Kylin Hill, back from last year’s torn ACL for his season debut, was in the rotation for kickoff returns. Such was Keisean Nixon, who’s been in that role and shown some explosiveness the past few weeks.

The Packers have lost four in a row for the first time since 2016. Breaking that skid kicked off the running of the table that included a victory at Detroit in the final game of the regular season.

The Packers are trying to avoid their first five-game losing streak since 2008. That was Aaron Rodgers’ first season as the starter. They snapped that swoon with a victory over Detroit in the final game of the regular season.

The Packers started Sunday in 11th place in the NFC but only one game behind San Francisco for the final playoff spot. With the next three games against Dallas (6-2), Philadelphia (8-0) and Tennessee (5-2), this seems like a must-win game.

“Not really,” Rodgers said when asked if this was a now-or-never game. “I don’t think it ever needs to feel like that. There’s a little bit more urgency, I think, as the season gets into November. Obviously, the weather’s changing, which is usually in our favor. If we can just get a couple of these, then I think we get to start to become that dangerous team we believed at the beginning of the season we’d be.”

The Packers started the week as 3.5-point favorites. About an hour before kickoff, that was up to 5.5 at SI Sportsbook. Interestingly, the line was only four points at FanDuel, where 63 percent of money was on the Packers to cover.

“He’s still got it all,” Lions rookie defensive end Aiden Hutchinson said of Rodgers this week. “And I think he’s still all there. I know that media’s talking, a lot of people are talking about him but, man, talented guy. We’re prepared and getting ready to just play your game against him.”

Lions defensive coordinator Aaron Glenn’s unit ranks 32nd in points allowed and is on track to give up the most points in NFL history. He’s taking nothing for granted against Rodgers.

“Well, they still have that guy, so, as long as you have that guy, you have a chance. Listen, this is the NFL and I wish you can go and win the division every year, but you can’t. It doesn’t happen. League parity, free agents, all that. Things change, draft, things change. That’s what we’re hoping for us as we continue to move on to get – to be in that leadership position as far as this division. So, man, as long as they have that guy, man, anything’s possible for him.”

There will be no excuses for a Packers offense that has failed to score more than 21 points for four consecutive games. the no 1 offensive line, which includes left tackle David Bakhtiari and left guard Elgton Jenkins, will play together for the first time this season. And receivers Allen Lazard and Christian Watson, both of whom were questionable, are active, too.

How to Watch: Packers vs Lions

TV: Fox. In a matchup between two struggling teams, it will be the Fox “A team” of Kevin Burkhardt (play-by-play), Greg Olsen (commentary) and Erin Andrews and Tom Rinaldi (sidelines). Check out the viewing map at 506 Sports to see if the game will air where you live.

Radio: Packers Radio Network (Wayne Larrivee and Larry McCarren; click here for affiliates) and Sirius (Channel 108 or 387 on the app).

Savage has issues to tackle

O’Donnell under pressure at punter; here’s why

Are injuries really a problem for the Packers?

Here’s why Aaron Rodgers has a healthy outlook

How to Watch/Listen/Stream/Bet Packers vs Lions