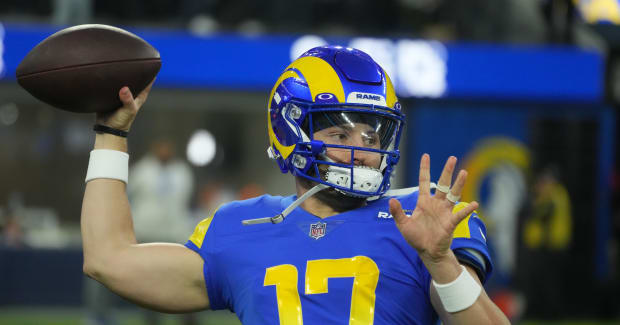 Mayfield hopes to keep the positive momentum after orchestrating a 98-yard drive to secure the game-winning touchdown vs. the Raiders with ten seconds left. The Rams signed Mayfield only two days before the victory. Meanwhile, the Packers are coming off their bye and have the rest of the advantage.

While neither team has lived up to expectations this season, their playoff dreams are still (barely) alive. If the Packers win their final four games and finish 9-8 they have a 55 percent chance of making the playoffs. The Rams have a very slim chance but would have to run the table and get a lot of help from other teams across the league.

The Rams’ (4-9) season has continued its seemingly uncontrollable tailspin with a depleted roster as Matthew Stafford, Cooper Kupp and Allen Robinson are all on the injured reserve list. Mayfield will start at quarterback and hope to bring life to disappointing season.

ODDS: The Rams are 7.5-point underdogs vs the Packers.

THE FINAL WORD: Former New Orleans Saints coach Sean Payton would consider Southern California as his preferred destination for returning to the sidelines, should he choose to do so.

“He is a TV analyst living in Los Angeles and based on his conversations I’ve had, if he had his druthers, that is where he would remain in the city of Los Angeles,” NFL Network’s Ian Rapoport said of Payton. “Potentially … if somehow, some way the Rams job or the Chargers job came open, that is certainly something Sean Payton would take a look at.”

Want the latest in breaking news and insider information on the Rams? Click Here

Want to join in on the discussion? Click here to become a member of the Ram Digest message board community today!