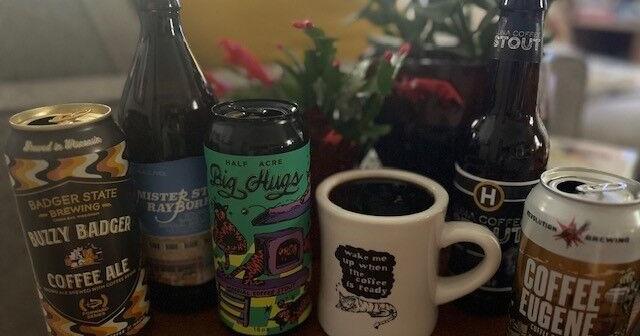 KATIE HERRERA For the State Journal

‘Tis the season for dinner parties, brunch dates and every holiday gathering in between. I don’t know about you, but I don’t like to show up to any festivity empty-handed. Whether it’s something to be enjoyed at the party or left in exchange for the merriment, a thoughtful adult beverage is always a priority.

And although I have been known to make an Irish Cream from scratch, take Bloody Mary fixins to an extreme and raid my cellar for something special, the ease of grabbing some beer on the way to the party has become my touted modus operandi while I try to fit everything into a jam-packed schedule.

This year, as available time seems to be something nobody has enough of — somewhat of a prized possession if I’m being honest — and you’re looking to bring some beer to share, might I suggest grabbing a variety pack on your way to the party

This format is sure to please a handful of different palates and is an easy grab since availability and diversity have grown immensely while breweries across the US find them impactful to growth and consumer experience. There is no shortage of beer out there, so let this list be a start to your holiday imbibing and gift-giving needs while allowing some much-needed time for yourself during the day.

Earth Rider Brewery Winter Mix 12 PackThis brewery in Superior sends a limited amount of their Winter Mix Pack out into the wild and inside rests four different beers: A crowd-pleasing amber ale, a seasonally appropriate Scotch Ale, a tropical fruit-forward IPA and a coffee-infused pale ale . Don’t be intimidated by a hop-forward coffee beer. Duluth Coffee Pale Ale is a prime example of how the nuances of a delicate hop and malt bill and a coffee’s brightness and acidic nature complement one another.

Victory Brewing Monkey Mixed 12 PackIf a higher ABV is your thing during the holiday season, Victory Brewing’s Golden Monkey Tripel and its two sour variants should do the trick. Golden Monkey is a long-tenured, well-done version of the Belgian style while Sour and Berry Monkey have become just as popular in a significantly shorter time. Yeast expressive and fun, these are the perfect accoutrement to an array of charcuterie, cheese and pickles.

Or perhaps you and yours prefer zero alcohol but still want to enjoy a well-crafted beverage that just isn’t sparkling water. Brooklyn Brewery’s Special Effects Non-Alcoholic Variety Pack provides those abstaining with four different styles of beer: a pilsner, a hoppy amber, a classic American IPA and a hazy IPA. If there is a sign that the non-alc movement and variety packs were two of the biggest beer trends of recent, this might be it.

One of the newest variety packs to hit the market, Allagash hits a home run with all four beers. Included in this limited release assortment is their classic, perfectly brewed White Ale (for all those Blue Moon drinkers out there), a couple new hop-forward beers with River Trip Pale Ale and Swiftly IPA and the deliciously robust North Sky Stout with its smooth texture and roasty palate. It really is reminiscent of that cup of coffee you are sure to have with those homemade sugar cookies.

With two hoppy beers — one classic American IPA and Mountain Standard, a haze craze ready juicy IPA — and the beautifully balanced Sippin’ Tropical Sour Ale with pineapple, passion fruit and tangerine, this variety pack rocks. The seasonal iteration also includes three cans of isolation, a winter warmer and favorite of mine come this time of year with its biscuity and molasses-forward flavor profile.

The more the merrier for this showcase of beers with three cans each of five different Oskar Blues suds. Included in this hodgepodge is a crushable macro-like lager, the ever-so-slightly more expressive and crowd-pleasing Mama’s Little Yella Pils, the piney OG Dale’s Pale Ale, Hazy Blues IPA for the hype beer drinkers and experimental Cosmic Mutant IPA, which uses an innovative, thiolized yeast to enhance all those yummy hop-derived tasting notes.

It seems counterproductive to have an alcoholic beverage that is beneficial to your overall gut health, but I am here for the assist and all in on Hard Kombucha this time of year, especially this very tiki-inspired variety pack that includes Midnight Painkiller, Mango Daydream , Coconut Cruise and Passion Fruit Punch. If you are a tea drinker, sour beer fan and love tropical cocktails, I encourage you to give this fermented green tea and honey-based beverage a try.

Happy beer shopping and a very special Happy four-year anniversary to Full Mile Beer Co.! If you have the time, swing by the tap room on Saturday, Dec. 17, for one of their four barrel-aged beer releases, featuring Driftless Glen and Dancing Goat barrels and Rusty Dog Coffee.

There is no shortage of beer out there, so let this list be a start to your holiday imbibing and gift-giving needs.