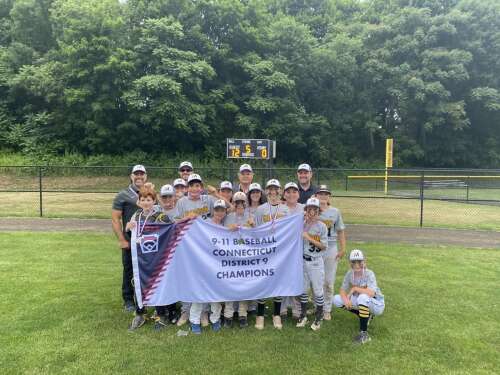 The Madison 11-U All-Stars baseball team earned a pair of 12-0 victories over Old Saybrook to win the District 9 championship and then advanced to the title game of the Section 3 Tournament this year. Photo courtesy of Elliot Kaiman

The Madison 11-U All-Stars baseball team went on an exciting run to claim the District 9 title and then make it to the championship game of the Section 3 Tournament this summer. Manager Elliot Kaiman said that it took contributions from all 13 players on Madison’s roster in order for his team to be successful.

Of those 13 players, 12 of them played for Madison’s 10-U All-Stars team that won the District 9 Tournament last year. Entering this year, Kaiman’s focus was ensuring that Madison always competed with a team-first mentality. It was a mantra that benefited Madison’s 11-U team right down to the final pitch of its season.

“Everyone not only knew each other, but played together. It’s a great group,” Kaiman said. “Early on, the coaches made it a point to talk to them about taking a team-first approach and avoiding an emphasis on individual performance. It was an early focus that really worked well during our time together.”

Madison captured the District 9 title by sweeping Old Saybrook in the championship series, earning a pair of 12-0 victories. The team went on to play in the Section 3 Tournament and won a couple of games to advance to the final, where Madison took a 7-6 loss against Glastonbury.

The 2022 District 9 Tournament was more abbreviated than in previous years. In lieu of pool play, Madison took on Old Saybrook for a best-of-3 series to decide the District 9 crown. On June 30, Madison won the first game of the series by a 12-0 score.

Heading into Game 2, Kaiman wanted to make sure that his players continued focusing on the things that had made them successful in the past. Despite winning the first game by double digits, Kaiman knew that Madison couldn’t take Old Saybrook lightly. The plan was for Madison to keep playing its brand of baseball no matter what happened in the second matchup.

“We wanted to play every game knowing it’s a tough opponent, and we wanted to play our brand of baseball. Our goal was to focus on pitching and defense,” said Kaiman. “It didn’t matter if we were way up, way down, having a close game—we wanted to have that same approach. We didn’t want to take anything for granted and wanted to play hard.”

Madison went on to post another 12-0 win versus Old Saybrook to clinch the District 9 championship on July 5. Kaiman said that this year’s victory felt just as sweet for the players as what they accomplished last summer. As Madison’s coaches watched the team celebrate, Kaiman felt proud to see just how much every player on his roster had grown.

“It was an awesome win for the boys and great for the town. They enjoyed it as much as winning the District 9 title last year,” Kaiman said. “The kids were thrilled, and it was our pleasure to see them enjoy the win.”

Prior to playing in the Section 3 Tournament, Madison participated in a couple of scrimmages to help the team get ready for its next phase of the postseason. Madison earned an 11-6 victory over Milford on July 16 and then won a 12-2 decision against a team of 11- and 12-year-olds from South Windsor. Kaiman said the goal was to ensure that this year’s team was ready to compete at the sectional level.

Madison recorded a 13-4 win versus Waterford in its first game of the Section 3 Tournament that was hosted in Newington. Madison went on to notch a 3-2 victory over Glastonbury in his second contest. Caiman called that game one of the biggest highlights of Madison’s season. Kaiman said that multiple players made amazing defensive players to help his club emerge triumphant.

After Glastonbury defeated Waterford, Madison squared off with Glastonbury for the Section 3 title on July 16. Madison was trailing 6-3 and down to its final out when Eoghan Kimball hit a 3-run home run to tie the game. Glastonbury went on to take the matchup by a 7-6 score after plating the winning run on a sacrifice fly in the bottom of the sixth inning.

Even with the loss, Kaiman was impressed with how his All-Stars team battled throughout its two tournaments. Kaiman said that the championship game showed exactly what Madison was made of as his players simply refused to quit.

“The kids continued to be really gritty and play hard. That comeback in the championship is emblematic of the group and how they were able to not give up,” said Kaiman. “They continued to chip away, keep their energy up, and support one another.”

From his pitching staff to the bats, Kaiman said that everyone on this year’s team contributed in a major way for Madison. Connor Warnke was one of the team’s primary pitchers and allowed no runs in his 6 innings of work. Warnke was joined on the pitching staff by Gabe Seehusen, who excelled on the mound during districts; and Will Pappas, who praised Kaiman for also playing a strong first base.

Kimball also spent a lot of time on the mound for Madison while additionally serving as one of the team’s leaders on offense. Connor Zaneski, another productive player at the plate, provided Madison with solid defense up the middle as the starting shortstop and also saw some innings on the hill.

Malcolm Kaiman was a defensive leader as Madison’s primary catcher, in addition to seeing time at the shortstop and pitcher positions. Ryan Warnke was also called upon to pitch, but Coach Kaiman said that he was always willing to contribute wherever the team needed him.

Madison’s outfield was bolstered by Bryce Simmons, who was the regular center fielder and a speedster on the base paths. Simmons was joined by fellow outfielder Thomas Cahill, who complimented Kaiman for always bringing a good attitude to the field.

Madison’s defense got a huge boost from players like Sean Perrelli, who was a standout second baseman; and Anthony Pesce, a versatile defender who always gave the squad competitive at-bats. Ryan Speerli was capable of playing both the infield and the outfield and was involved in several key plays throughout the season. Jake Rusher saw limited time due to injury, but still proved one of Madison’s best power hitters when in the lineup.

No matter what position they played, Coach Kaiman was impressed with how much Madison’s athletes progressed from last year’s 10-U season to this year’s memorable run. Kaiman said that players on the Madison 11-U All-Stars baseball squad entered the year with confidence and used the team-first mentality that had been instilled in them to become District 9 champions.

“The familiarity helped them work together and stay confident. They had a natural tendency to count on each other. Rather than getting down after a mistake, they would have a natural view that it was a team approach,” Kaiman said. “They knew they had a lot of strong players on the team. It’s easy to be optimistic and cheer when it’s the group that had so much success last year. The whole group had the confidence that we’re a real team and we could compete at a high level.”