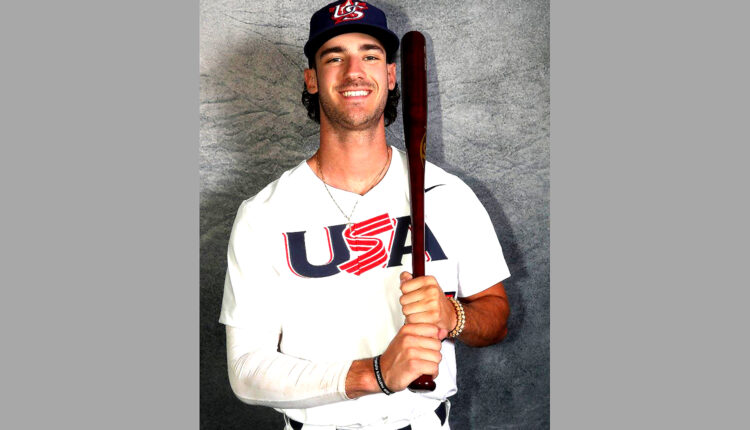 During what has been a very busy spring, summer and fall of baseball, Bryce Eldridge, by his count, has worn nine different uniforms playing for various teams.

The favorite and most significant attire the Madison High School senior says he has been able to sport during that stretch is the current outfit he wears as a member of the 18-under National Team USA baseball squad. Eldridge was chosen to the final 20-player elite roster earlier this month as a pitcher/first baseman, fulfilling a longtime goal.

“When I found out I made the team, it was the happiest moment ever,” the 17-year-old Eldridge said. “It has been a grind to make it because there is so much talent to go against, but it has always been a dream to wear a USA uniform.”

Eldridge was one of 100 players initially chosen for the 18-under tryouts. He made the field when it was cut to 41. Then, by being one of the best hitters and pitchers, he was selected to the final 20 after a five-day training camp in Fort Myers, Fla.

He is representing the US in the 12-team World Baseball Confederation 18-under World Cup competition, being held this month in Florida. Eldridge likely will start at first base and be the closer on the mound.

As a result of the tryouts and playing in the World Cup, Eldridge will miss about a month of school, after attending classes the first two days at Madison last month.

“I was able to stay pretty calm and confident during the tryouts, and I played well,” Eldridge said.

Madison head baseball coach Mark Gjormand said it was no big surprise to him that Eldridge made the final roster. The coach explained Eldridge prepared for the tryouts by playing on top-quality travel and select teams this summer and participating in showcase and other significant competitions, including the Perfect Game All-American Classic.

“Bryce has all the tools and talent, checks all the boxes, he is rated the No. 1 two-position player by Perfect Game and he is performing so well, and he has all summer,” Gjormand said. “Plus, he prepared himself for this, set his sight on making the team and worked so hard.”

Eldridge is one of two players from Virginia on the team, with pitcher Blake Dickerson of Virginia Beach the other.

At 6-foot-71/2, Eldridge is a power-hitting left-handed batter. On the mound, he throws right-handed, with a fastball clocked in the upper 90s. He has committed to play Division I college baseball at the University of Alabama, and is projected to be selected high in the 2023 Major League Draft.

Eldridge said making the 18-under roster makes up for the disappointment of not being selected for the final 15-under Team USA roster a few years ago. He was injured during the tryout process, and not selected.

During a recent stretch during the 18-under tryouts and exhibition games for Team USA, Eldridge went 4 for 6 with a homer, double, two singles, six RBI and two walks.

At Madison, Eldridge was a member of the Warhawks’ 2021 state-championship baseball team, but played in only eight games (batting .466 with two homers) this past spring, and didn’t pitch, because of a lingering hamstring injury.

“We look forward to the springtime when we will have a healthy Bryce back on our team for the full season and see what kind of mark he can leave on this region,” Gjormand said.

Prior to high school, Eldridge was an all-star standout for various Vienna Little League teams.

GRADE: Eldridge is the second Madison player under Gjormand to make a final 18-under Team USA roster. Pitcher/infielder Andy McGuire was on the 2013 squad.