Making Green Bay greener one compost bucket at a time 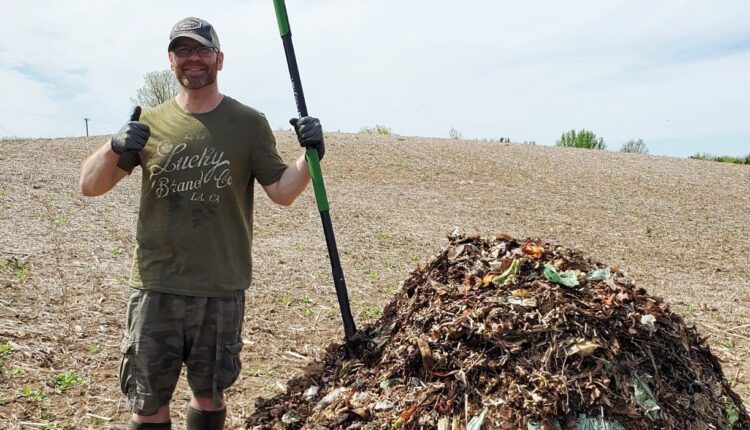 GREEN BAY – There’s an old saying: “One man’s trash is another man’s treasure.”

Green Bay resident and owner of Greener Bay Compost Cory Groshek is that other man.

For the past 10 months, Groshek has operated a curbside food waste disposal service, helping subscribers keep their biodegradable matter out of the landfill.

Since starting Greener Bay Compost last August, he said he and his patrons have prevented 18,000 pounds of garbage from taking up landfill space.

Launching last summer with 16 subscribers, Groshek said that number has increased by more than 780%.

Here’s how it works

Greener Bay supplies subscribers with lidded five-gallon buckets, along with a handful of sawdust to absorb odor and liquids.

They pay about $15 a month for Greener Bay to pick up their vegetable scraps and compostable materials weekly or every other week.

Allouez resident Nik Krawczyk, a Greener Bay subscriber, said he received the subscription as a birthday gift from his wife, Lily.

“(She) became tired of me just having random bags of food scraps on our back patio waiting for me to drive them up to our family farm property up north,” Krawczyk said. “Tossing food scraps in the trash filled me with pretty intense anxiety, because I grew up in a composting family, and I know how beneficial the process can be to a local environment.”

He said Groshek is passionate about spurring positive change at a hyper-local level.

Groshek said Greener Bay has grown to the point that it will begin selling the compost it produces – and is moving the composting function of the operation from the backyard of his Green Bay home to a seven-acre plot in Shawano County.

“We outgrew (the backyard) months ago,” he said.

The compost will be packaged in one-cubic-foot bags and will retail for $39.99.

Subscribers get an automatic 5% discount, with the potential to earn a 20% discount if their collection buckets are clean and free of contaminants, such as apple stickers, pieces of foil or plastic wrappers.

A different kind of farming

Groshek calls himself a microbe farmer.

“There’s more to it than throwing stuff on the ground and letting it rot,” he said. “There’s an art and a science to it. It takes science to get it to break down these little microbes, which are already in the food waste; it’s not like you’ve got to go buy them.”

Groshek said it’s about getting the right mix of carbon and nitrogen while getting enough air and water for it to break down.

“These little microbes are just like people – they need the same things you and I do to live,” he said.

Groshek said he prefers open-air composting to the enclosed tumbler method – noting it doesn’t create methane, therefore doesn’t stink.
That’s where he said one of the big environmental benefits comes in.

“Not only are we not sending this stuff to landfills and (instead) putting it back into people’s gardens, but we are not creating methane,” he said. “In terms of greenhouse gasses that cause our atmosphere to heat up, it’s actually more than 20 times more potent than carbon dioxide, which is the carbon that everyone is talking about when they talk about carbon footprint.”

Adding compost to the soil enriches it with phosphorus, nitrogen and potassium, and can reduce some plants’ need for soil additives, such as fertilizer, according to the US Composting Council.

“Some people don’t understand what compost is,” Groshek said. “They think it’s garbage, but it’s not. Landfill is garbage. What I make is magic.”

Croissants, banana peels, Q-tips and cotton balls (that have not come into contact with chemicals or makeup), droppings from chicken and rabbits, toothpicks, vegan candies, chocolates, baked goods, nut shells (except black walnut) and untreated wood .