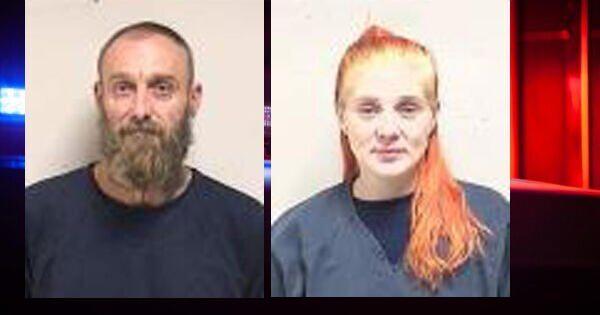 The man accused of firing a shot into the air and starting fires during the 2020 turmoil in Downtown Kenosha is facing new criminal charges for alleged crimes committed last month while out on bond.


Joshua Ziminski, 37, and his wife Kelly Ziminski, 32, of Racine, were both charged Wednesday in Kenosha County Circuit Court with numerous felonies for allegedly attempting to rob a Kenosha man at knifepoint late last month.

Both are charged as parties to a crime with armed burglary, robbery with threat of force, intimidation, false imprisonment, unauthorized use of an individual’s personal identifying information or documents and misdemeanor battery. Joshua Ziminski was also charged with felony bail jumping.

Both are being held on $100,000 cash bonds. They are expected to appear in court Sept. 23 for preliminary hearings.

According to the criminal complaint, a Kenosha Police officer spoke with a man at 2 am on Aug. 26, who was walking westbound on 52nd Street and who said a woman and two men had come to his apartment that night, in the 5300 block of 17th Avenue, and attempted to rob him.

The man recognized the female as someone he knew as “Bonnie,” a woman he had met about a week before. He said that he thought she was homeless with children and wanted to help her. The man told officers that on a prior occasion, he paid her $30 to $35 to clean the carpets at his apartment. “Bonnie” was later identified as Kelly Ziminski.

The man said that around 1:20 am, he was at his apartment when Kelly Ziminski knocked on his door and asked to come in and use the bathroom. He said he allowed her in but she was followed by two men who came in and grabbed him. The man identified one of the men as Joshua Ziminski, according to the complaint.

The man told officers that Joshua Ziminski told him to “Give me the money from the house” and that he replied that he had no money at home but some in the bank. He said Joshua Ziminski then grabbed him by the arms and was holding a knife in his hand with the blade closed, according to the complaint. The man said the second man punched him in the face twice and then they pushed him into a truck.

The man said they demanded the PIN to his debit card and drove him to a gas station. They reportedly attempted to use his ATM card to withdraw money but it failed. They then drove him to three other gas stations along Washington Road but were not able to withdraw any money from his account, according to the complaint. When all of that failed, they brought him back to the first gas station, where he was able to flee his alleged captors into the store.

The complaint states Joshua Ziminski and Kelly Ziminski then drove off and the man told the employees to call 911.

Joshua Ziminski stated that he waited in the car while Kelly Ziminski went inside. Shortly thereafter, he said Kelly Ziminski came out and told him that the man had hit and raped her, according to the complaint.

Joshua Ziminski also reportedly stated that he went inside and confronted the man and hit him a few times and demanded the full $200 for Kelly Ziminski’s cleaning services. Joshua Ziminski also said that the man denied having the money but offered to go to an ATM with them to withdraw it. He also said the man at one point handed the debit card to him and told him to try to use it.

Joshua Ziminski was already out on bond and scheduled to appear in court Oct. 14 for crimes allegedly committed in August 2020 during the Downtown turmoil following the shooting of Jacob Blake by a Kenosha Police officer.

He is facing charges of felony arson and misdemeanors of obstructing an officer and disorderly conduct with a deadly weapon. He posted bond in the spring. That bond was increased from $1,000 earlier this year to $13,000 by a judge after Joshua Ziminiski allegedly threatened and intimidated a witness at court as jury selection was first set to begin in January for the alleged crimes committed in 2020.

Joshua Ziminski was charged with disorderly conduct after authorities used a previous booking photograph to identify him as the man who fired off a what he allegedly called a “warning shot” into the air on Aug. 25, 2020, just before Illinois teenager Kyle Rittenhouse, who was in the same area, shot and killed Joseph Rosenbaum.

Rittenhouse was found not guilty in November 2021 in that shooting death, along with the shooting death of Anthony Huber and for injuring Gaige Grosskreutz during riots that night in Downtown Kenosha. Rittenhouse said he acted in self-defense.

Police investigating the shootings identified Joshua Ziminski and observed that he was holding a black stolen handgun, according to reports. At one point, in a video Joshua Ziminski was seen pointing the gun to the sky, and the police observed a “muzzle flash” and heard a gunshot at the same time. The Ziminskis were then seen leaving the area.

The felony arson charge was filed after a video on Kelly Ziminski’s phone showed Joshua Ziminski tossing a match into a dumpster and then asking the crowd for lighter fluid to help the fire spread, according to the criminal complaint.

Joshua Ziminski then pushed the dumpster onto Sheridan Road as police vehicles were moving toward him. His wife was seen on video adding flammable material to the fire, the complaint states.

In another video, according to the complaint, Joshua Ziminski is seen near a trailer that is overturned and on fire in the 5800 block of Sheridan Road “manipulating the fire with his right foot.”

Kelly Ziminski pleaded guilty last April to a misdemeanor count of obstructing and a civil forfeiture charge of failing to comply with an emergency order.