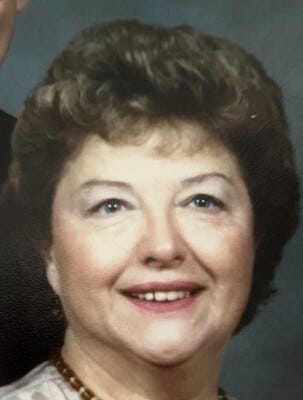 Mary Ione (Stockton) Madden passed away Saturday January 21, 2023 under Hospice at The Courtyard at Bellevue Memory Care. The daughter of the late Ross Stockton and Rhea Price Stockton. She was born September 13, 1933, in Sparta, WI as there was no hospital in Tomah, WI where her parents lived at that time. Mary graduated from Madison West High School in 1951. Mary worked for the Wisconsin Department of Agriculture and the Children’s Orthopedic Hospital in Madison. She was a member of the ESA Sorority. Mary and her late husband Bill were married in Madison, WI on June 5, 1955 at the Glenwood Moravian Church. They were blessed with three children – Timothy, Shirley, and David. So, seven grand children and six great grand children. She served various church committees over the years, including the Elders, various Circles and singing in the Choir. One of her great enjoyments were visiting the shut-ins, which she did for many years. She enjoyed being a Girl Scout Leader and Den mother while the children were growing up. One of her greatest accomplishments was to make her own book of poetry and publish it. These poems were written from 1945 to 1995. She dedicated the book to her seven grandchildren at the time. She was greatly influenced by family, teachers, her love of literature and her love for Christ. Mary and Bill were longtime members of West Moravian Church. Together Bill and Mary enjoyed over 50 years of camping and many trips throughout the US. They were especially active traveling upon Bill’s retirement. She is survived by her two children: Timothy (Connie) Madden and Shirley(Michael) Ryan; grandchildren: Jon Ryan, Vanessa Day, Lauren Ryan, Colleen Ryan, Kimberly Baltz, Emily Smith, and William Madden; Great-Grandchildren: Madelyn Day, Hudson Ryan, Liam Baltz, Jacob Baltz, Sophia Smith and Charlie Smith; Sister-in laws: Roberta and Anita Stockton and many other extended family members. Mary was proceeded in death by her husband: William (Bill) Madden; her son: David Madden; parents: Ross and Rhea (Price) Stockton; three brothers: George, Dick and Thomas Stockton; in-laws: Raymond and Kathryne (Zurbriggen) Madden; sister-in laws: Dorothy Stockton and Jean (Madden) Gardner; and brother-in-law: George (Bud) Gardner. A Memorial service will be held on Saturday, February 11, 2023 at 11:00 am at West Moravian Church, 1707 South Oneida Street, Green Bay with Pastor Marian Boyle officiating. Visitation will be from 10:00 am until the time of service. Mary will be buried alongside her late husband William (Bill) in the West Moravian Cemetery in Ashwaubenon. Condolences may be left for the family by visiting www.lyndahl.com Special thanks to the staff of Bellevue Assisted living where Mary resided for 9 years, and then The Courtyard at Bellevue Memory Care the past 2 ½ years for the care and compassion they both provided Mary. Also, thanks to Aseracare Hospice for the support, comfort, and care they have recently provided. In lieu of flowers, memorials can be made in Mary Madden’s name to the West Moravian Church.

What will it take to get GOP lawmakers, Democratic governor to work together?