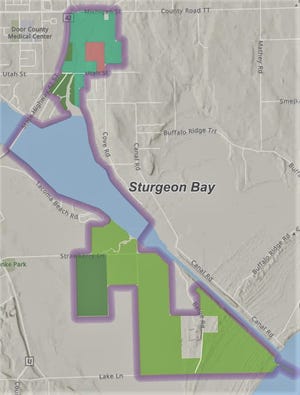 GREEN BAY – The public has two opportunities in the next week to offer its thoughts on recommended natural area sites for the Bay of Green Bay National Estuarine Research Reserve, with one of the possible sites including locations in Sturgeon Bay.

Under the direction of the National Oceanic and Atmospheric Administration, a NERR is a coastal site designated to protect and study estuary systems, the ecosystems where rivers and lakes, seas or oceans come together. A partnership program exists between NOAA and the states where the NERRs are located, with a state agency or university managing the local sites with input from local partners. NERR designation is non-regulatory, so there would be no change to any activities on water or land within the site.

Just two of the country’s 30 NERRs are on the Great Lakes and just one in Wisconsin, in and around Superior. The University of Wisconsin-Green Bay is leading the state’s effort to designate a NERR on the bay of Green Bay.

“As we have worked toward site selection, I have been energized by excitement in the region for the NERR and the associated opportunities that come with designation, including student engagement, water quality research, science training and community stewardship.”

Also part of the proposed Green Bay NERR are recommended sites along the Peshtigo River in Peshtigo and along the bayshore around the villages of Howard and Suamico and the town of Scott.

Should the area acquire a NERR designation, the city of Sturgeon Bay also is interested in being named to host a NERR visitor and research center and formed an ad hoc committee earlier this year to explore that possibility and its benefits. But that location isn’t ready to be chosen.

“We have not begun the process to search for a site for the NERR visitor center,” Tyner said to the Advocate. “Selection of a location will not occur until after the preliminary recommended natural area sites are selected and approved by NOAA. We anticipate starting to look in early 2023.”

The two events in the coming week will present the recommendations for the NERR sites, which will take about 45 minutes, and have public comment and discussion afterwards. The same presentation will take place in each.

An in-person presentation and comment period takes place from 1 to 2:30 pm Wednesday at the STEM Innovation Center on the UWGB campus. A virtual presentation and public comment via Zoom is scheduled for 3:30 to 5 pm Thursday; the meeting ID number is 995 5126 4991, and the attendee access code is NERR. Participants may also join the meeting by phone by calling 312-626-6799; the meeting ID is 995 5126 4991 and and access code is 688730. Registration is encouraged but not required.

RELATED: Sturgeon Bay is moving ahead with a bid to host a bay of Green Bay research visitor center