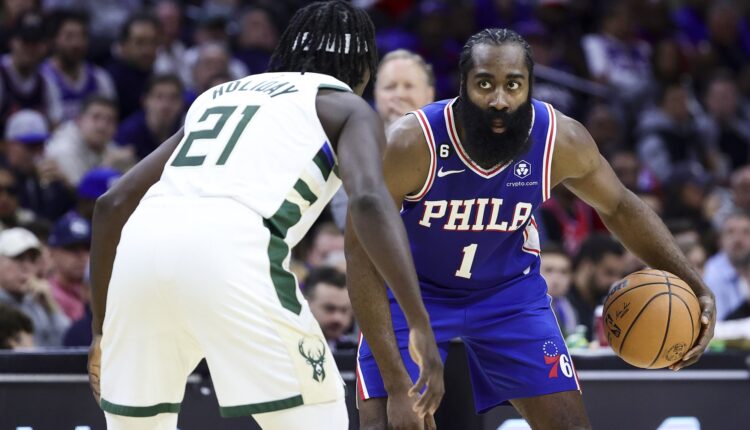 The Milwaukee Bucks opened their NBA season Thursday night with a 90-88 victory over the Philadelphia 76ers. Let’s look at what Bucks players stood out for the right and wrong reasons.

Unsurprisingly, the Greek Freak finds himself in the studs section. There’s more of a chance I become the next Prime Minister of Great Britain than Giannis finding himself being referred to as a dud.

Giannis seemed to take on a slightly different approach in this game, screening more and trying to get his teammates involved in scoring more. There’s been a healthy debate online regarding this and whether it’s a wise tactic, but that’s not this article’s point.

Giannis nearly secured his first triple-double of the season. However, he fell short, finishing with 21 points, 13 rebounds, and eight assists. Along with this, he helped himself to steal one and three blocks – one of which was a highlight play, stopping Joel Embiid at the rim.

Giannis was on the floor for 36 minutes and looked great, considering he played competitive basketball all summer. He shot 56 percent from the field and went 1-3 from beyond the arc. He went 2-5 from the penalty stripe, but that doesn’t concern me too much.

All in all, a solid performance on opening night for the best player in the NBA right now.

Splash Mountain deserves recognition for his performance in Philly. Given that he missed the majority of last season after back surgery, you’d forgive him for being rusty to start the season. However, he was anything but rusty. In a game where the Bucks were missing Khris Middleton due to injury and Jrue Holiday struggled offensively, Lopez stepped up and was the Robin to our Greek Superman.

Brook Lopez is known for his defense these days, and he didn’t disappoint with two blocks, including this one on Joel Embiid (it wasn’t Embiid’s night at the rim).

Brook was the second-highest scorer on the Bucks squad and third-highest in the game with 17 points. He shot 4-12 from three and 6-16 overall, which isn’t exactly the hottest shooting, but it was enough to help the team to the all-important victory.

Unfortunately, while we have our studs, we also have those who didn’t perform well. And in this case, that would be Jrue Holiday, who struggled offensively. This isn’t the first time the Bucks starting PG has struggled with his shooting, having had the same issue a few times since being traded to Milwaukee.

However, I do highly rate Jrue Holiday, so I’m not going to sit here and criticize a brilliant player for having a rough game. They happen, it’s life, and nobody is perfect. So let’s have a look at his shooting stats and move on.

Holiday shot a mere 2-15 from the field, including 0-6 from 3. He finished the game with six points, two of which came from the free-throw line. He looked as if he was shooting more and more as the game went on in the hope he found his groove, which sadly just didn’t materialize.

It is worth noting that it wasn’t a completely terrible performance. He did contribute eight assists to the team, along with two steals.

Milwaukee hosts Houston on Saturday night, so here’s hoping Jrue is back to himself, and the next time a topic like this is discussed, he’s in the studs section, and we are singing his praises.