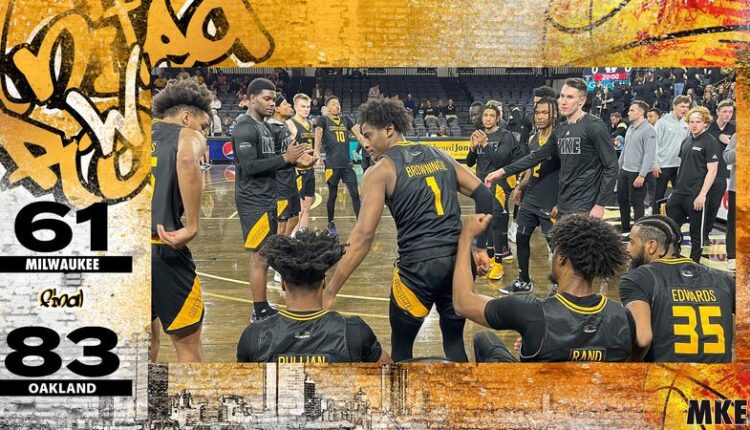 ROCHESTER, Mich. – Oakland used a strong second-half performance to pull away from the Milwaukee men’s basketball team Thursday night at the O’rena.

The Panthers (8-5, 2-1 Horizon League) were in an even contest at the half but couldn’t find a way to catch the Golden Grizzlies (3-11, 1-2 Horizon League) down the stretch.

“We just didn’t guard anyone,” head coach Bart Lundy said. “We didn’t get two consecutive stops the whole half – we can’t play like that; we can’t defend like that. And you can’t expect any outcome other than this if you do.”

Markeith Browning II chipped in with six points, seven rebounds, and four assists. Jalen Johnson added 10 points off the bench to bring his career total at the NCAA Division I level to 995.

The Grizzlies were led by a career-high 20 points from Blake Lampman, who saw all five starters finish in double-figures. The defense also limited MKE to 37.1 percent (23-of-62) on the night and connected to 50.9 percent (29-of-57) of their own field-goal attempts overall.

Oakland took control by scoring the first 10 points of the second half. The margin stood at 15 before a Milwaukee run had the Panthers back within striking distance at 62-54 on a coast-to-coast layup from Kentrell Pullian with 10:41 to play. Despite a handful of surges down the stretch, the team could get no closer in the 83-61 decision.

“I think they learned that you have to guard people,” Lundy said. “We have been guarding teams all year. We’ve had a stretch here and there where we struggled but for the most part, we have been guarding. And we didn’t do that tonight – they were the tougher team. They just spread us out and said ‘we’re going to drive you’ and that’s what they did. And we didn’t stop them.”

An 11-0 run by the Panthers took the sting out of a bit of a slow start. Oakland led 12-4 before MKE pushed back, with a three from Elijah Jamison bringing the team back within three at 15-12.

It was another deep shot that made it a one-point game at 18-17 on a triple from Justin Thomas. OU had an answer of its own and eventually built its advantage to 34-22 for its biggest lead of the opening half.

Rand blocked his third shot of the period and then hit a three of his own on the other side to help that 11-0 run, which was capped by a three-pointer plus a free throw by BJ Freeman, which brought Milwaukee within one at the time at 34-33 with 3:00 left in the period.

The Panthers will be right back at it, taking on Detroit Mercy in a New Year’s Eve matinee Saturday. Tip time against the Titans is set for 11 am CST.