Milwaukee philanthropist Isabel Bader, 95, was driven to help others 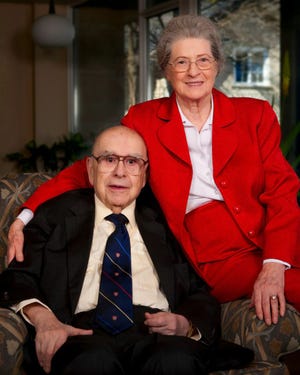 Isabel Bader, a teacher and philanthropist who with her late husband Alfred directed hundreds of millions of dollars in gifts to causes ranging from the arts and humanities to chemistry and higher education, died Sunday at her Milwaukee residence.

Daniel Bader said his stepmother was devoted to his father, who died in 2018, and continued his philanthropy, but with her own unique vision.

“It wasn’t just that she took up his mantle in the old master paintings and chemistry,” he said. “She developed her own interest, particularly around indigenous communities and immigrant communities.”

Daniel Bader, president and chief executive of Bader Philanthropies, spoke with admiration about Isabel’s ability to push him to do better. The foundation carries on the philanthropic legacy of his late mother, Helen Davis Bader, and Isabel and Alfred Bader.

“She never let me rest on my laurels,” he said. “She was always challenging me in a good way to do things better, do things faster.”

Just last month, the nonprofit announced plans to provide a $3 million grant to the UWM Foundation to benefit the University of Wisconsin-Milwaukee’s Electa Quinney Institute for American Indian Education.

Her philanthropy was also felt at Queen’s University in Kingston, Ontario, her husband’s alma mater.

“Queen’s was very fortunate to have been one of Isabel’s priorities,” Patrick Deane, the school’s principal, said in a statement.

“To have known Isabel — in all her warmth, gentleness, wit, and acuity — I will number among the great privileges of my life,” Deane said. “She was a gentle soul who delighted in seeing students thrive and discover their own potential through the arts. I will remember her as indomitably humane.”

According to a release from Queen’s University, Isabel and her husband donated to the school a vast art collection that included four Rembrandt paintings, a castle in England, and a center for performing arts.

“Isabel loved the performing arts and was always interested in new developments. This is a person who had an acutely curious mind and extensive knowledge of the arts,” said Tricia Baldwin, director of the Isabel Bader Center for the Performing Arts, in a statement.

A difficult bringing up

Isabel Overton was born November 1, 1926, the middle child of Herbert and Estelle Overton. She was raised in Kirkland Lake, a gold mining town in northeastern Ontario, Canada.

“Her father worked at the gold mine,” Daniel Bader said. “It was a tough bringing up. They were living in really harsh conditions.”

She attended college at a school that would become the University of Toronto, where she studied history and languages.

In 1949, she took a fateful trip, traveling by passenger ship from Canada to Liverpool.

On the voyage, she met Alfred Bader, who fell in love and quickly proposed to her. Hey was Jewish. She was protestant. Intermarriage among faiths at the time was rare. She decided that Alfred should marry someone who was Jewish so that he could raise a family.

He eventually met and married Helen Daniels, who helped him as he co-founded Aldrich Chemicals. The couple divorced in 1981. And Bader married his lost love Isabel.

By then, Isabel had long created a life of her own in England.

She spent 28 years at a girls’ school in Bexhill-on-Sea. There she co-founded a drama school, the Thalia School of Elocution and Drama. She was also a costume designer.

Asked to describe Isabel, Daniel Bader called her: “Very smart, very sharp, very witty. Very committed to being of service. Kind of driven in a way. Especially in her later years. All of that energy was focused on philanthropy and grants , making sure the money was used to help others.”