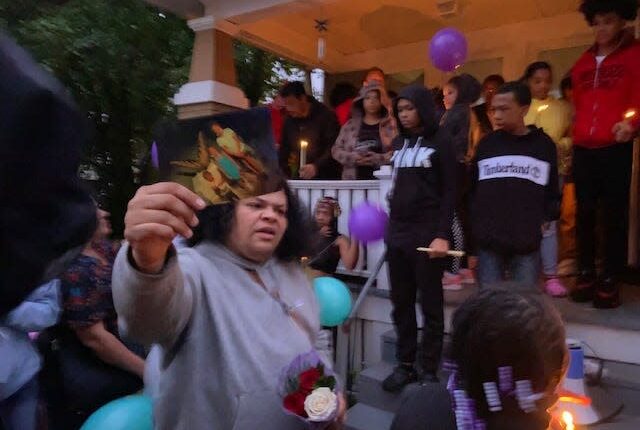 A 17-year-old Milwaukee boy is charged in the shooting death of a 12-year-old girl who was killed while unloading groceries Oct. 10 in the north Milwaukee area.

On Monday, the Milwaukee County District Attorney’s Office issued charges against Benjamin N. Garrett of first-degree reckless homicide and first-degree recklessly endangering safety, both as a party to a crime. If convicted, he could face up to 72 years and six months in prison and could be fined up to $25,000.

Olivia Schultz was killed at 5331 N. 37th St., while her mother, Celeste Wilson, was shot in the back.

Celeste Wilson, the mother of 12-year-old Olivia Schultz, holds up photos of her daughter during a vigil on Oct. 11, one day after she was killed in a shooting while her family unloaded groceries outside their north-side home.

According to the criminal complaint, the family had returned home from grocery shopping and parked in an alley behind their home when two young, masked males approached “as if they were looking for something.” One of the males was wearing a black surgical mask while the other was wearing a black ski mask.

Wilson’s husband stared at the males, prompting the male who was wearing the surgical mask, to say, “Can I get my face back?” and then pulled down his mask allowing family members to see his face.

When her husband carried a grocery bag into the house, the suspect pulled out a gun. Wilson told him not to do anything because it wouldn’t be worth it.

The males continued walking, and the family, along with her children, continued to help unload the vehicle.

When the males were about four houses away, Wilson said the person she interacted with began to shoot at her and her family. As she turned to take cover, she was shot in the back. Olivia was shot and killed in the incident.

Olivia’s sister, who had also seen the face of the male, identified him as Garrett based on Facebook photos.

Law enforcement continue to seek Garrett and ask anyone with information to contact Milwaukee Police Department with any leads regarding the case at (414) 935-7360 or, to remain anonymous, contact Crime Stoppers at (414) 224-Tips or P3 Tips.

Our subscribers make this reporting possible. Please consider supporting local journalism by subscribing to the Journal Sentinel at jsonline.com/deal.

DOWNLOAD THE APP: Get the latest news, sports and more