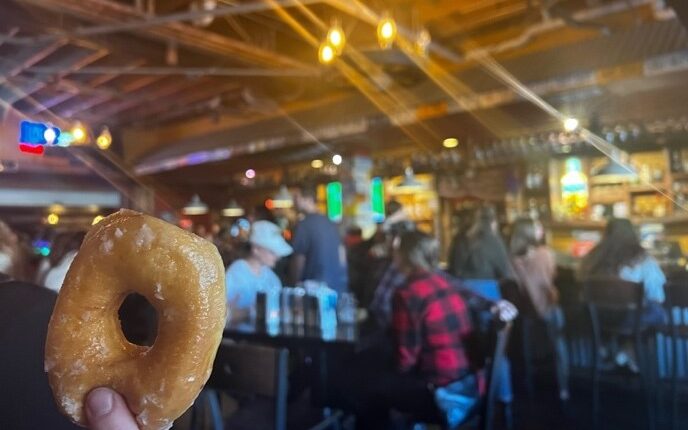 This past weekend, Wicked Events kicked off the fall with a Hard Cider and Donut Festival and bar hop to celebrate three of Milwaukee’s most popular downtown spots: Brother’s Bar and Grill, McGillycuddy’s Bar and Grill and Red Rock Saloon.

The event offered participants $4 hard cider, beer and hard seltzer, as well as two free donuts with admission. At the 4 pm start, people came through the doors in droves sporting their flannels and sweaters.

The celebration began at Brother’s. Employees handed out bright green wristbands and two ticket stubs for their donuts. They served strawberry and blackberry Downeast Cider on tap, plus Angry Orchard original cider. The sounds of the football game were overpowered by chatter.

Lucy Sackerson, a Brother’s server and UW-Milwaukee student, says that the bar crawl means business, and it came at the perfect time for the Milwaukee School of Engineering and Marquette family weekend.

“I have a great mix of college students here, from Milwaukee and Waukesha schools,” said Sackerson. “It’s just a great way for everyone to get together.”

One hour into the event, Brother’s ran out of donuts, so the next stop was Red Rock Saloon. Stepping through wooden doors, it was clear the crowd had thinned. But inside, the bar was still packed with patrons eager for more drinks.

One problem: they were out of cider. We did manage to grab a few donuts before they ran out of those too.

Red Rock Saloon employee Ben Steinlage, 24, says that the bar crawl is a great way to show people that they’re still open during the day post-COVID. He gets to talk to people he never would otherwise. The employees even get to eat the donuts—that’s his favorite part.

“It’s so fun to meet everyone,” said Steinlage. “There’s so many fun, vibrant faces. As toxic as the bar environment can be, it still brings people together.”

The evening had clearly winded down and the theme of the night had shifted towards the ongoing football game. Cheers and boos overpowered the bar, and bartenders were passing out the last of their donut stock– they were out of cider.

On the way to McGillycuddy’s. Photo: Lauren Krueger

Although the event had dwindled, the celebration sent a clear message: Fall has arrived.