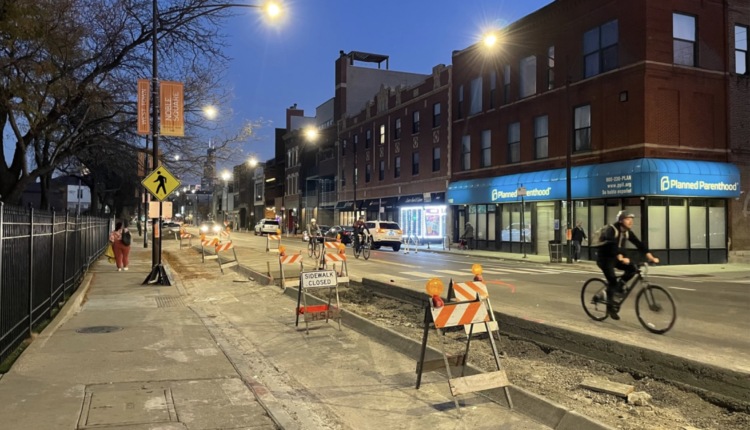 This post is largely adapted from commentary by Streetsblog Chicago cofounder Steven Vance from early November, with his permission. The infrastructure has likely been completed since then.

As part of the Chicago Department of Transportation’s current project to add concrete protection to all of the city’s “protected” bike lanes (many of which have lacked physical protection from drivers), CDOT has installed a number of new bus boarding islands on Milwaukee Avenue in River West and Logan Square, with the islands doubling as bikeway protection. Let’s take a look at the designs.

Milwaukee and Elston Avenue (1130 W.): Despite the presence of a bus island to the left of the northwest-bound bike lane here, there is inadequate protection of bike riders from right-turning drivers. If this is due to a lack of available road width, then it seems that CDOT could have freed up space by narrowing the southeast-bound bike lane, which is a generous eight-feet-wide.

Milwaukee/Racine looking southwest. As of early November, the two bus islands at this intersection were a barrier to crossing Milwaukee. Photo: Steven Vance

Milwaukee and Racine (1200 W.) avenues: On the northwest-bound side, the curb ramp to get down to the bike lane level has not been installed and it’s not clear if that is part of the plan. Additionally, there is no path for a crosswalk along Racine across Milwaukee because the islands are blocking such a route. As shown in the above photo, a couple was walking their dog and went around one of the islands in the middle of the road. That’s not a good situation, so Steven notified a CDOT staffer about the issue.

Milwaukee and Maplewood Avenue (2530 W.): Here the bike lane rises a bit to meet up with the sidewalk and bus island level, essentially making the crossing from the sidewalk to the island a raised crosswalk. According to a CDOT staffer, this more pedestrian-friendly layout was implemented here because there was more lead time for the design. The other islands, which are less convenient for people on foot or in wheelchairs, and less aesthetically pleasing, Steven is referring to as “discount models.”

A few more thoughts from Steven

What do you think of the new concrete infrastructure? Tell us in the comments.