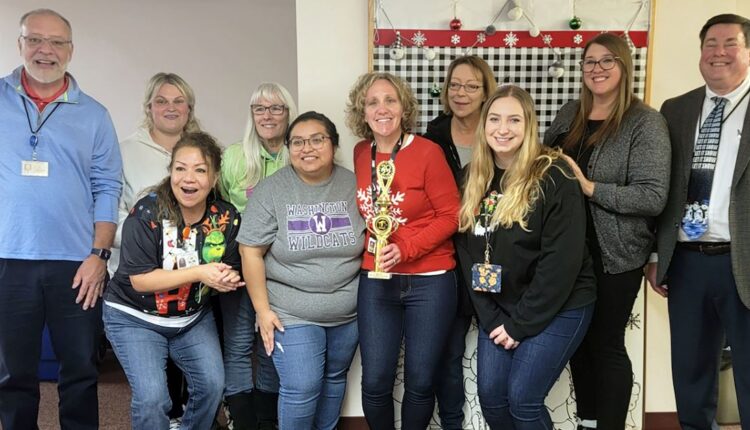 Staff from Kenosha County’s Division of Children and Family Services this holiday season again exercised their creativity and generosity for a good cause.

In the annual Feed 100 Families food drive event, held earlier this month, DCFS workers collected food and cash donations, which were then distributed to families referred by the schools and various human services agencies.

As part of this effort, they also decorated their work areas within the Kenosha County Job Center, engaging in a friendly competition between service units that culminated in the awarding of trophies for Most Generous and Most Creative.

“It was another spectacular year of holiday decorations and food collections by all,” said Kenosha County Human Services Director John Jansen, who judged the competition alongside Division of Children and Family Services Director Ron Rogers.

While Jansen praised all the competitors for their creativity, the Most Creative title went to the Youth Justice/DCFS Clerical team, for the “Polar Express” theme that it brought to its office area.

The Most Generous award went to the Child Protective Services/Kinship Care team, which reached out to community partners to supplement the staff donations. As part of this effort, the Kenosha County District Attorney’s and Victim Witness Office, the Child Advocacy Center and Bellissima’s Boutique contributed food and gift cards.

Other competitors in the contest included the Ongoing Services Unit, the Prevention Services Network, and the DCFS management team.

All of the decorating work was done on the staff’s own time, during non-working hours, noted Kenosha County Gang Intervention Supervisor Donna Rhodes, the coordinator of the event.

“This is a hugely popular event with our staff, and a wonderful opportunity to give back to the community that we serve,” Rhodes said. “It is awesome to see the creativity that’s used, and the generosity that benefits many families in need during the holidays.”

More information about the Kenosha County Division of Children and Family Services and its various work areas is available at https://www.kenoshacounty.org/241/Children-Family-Services.

What would Madison-area arts organizations love to see under the tree? – Isthmus

Literacy Council: Tutors ‘open up a whole new world’ in 2023