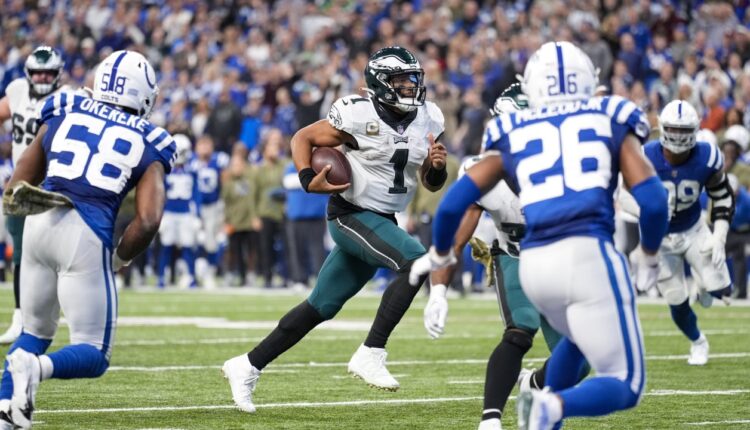 KEY INJURIES: Goedert is on injured reserve, but is expected to return later this season. He has to sit for at least two more games following the Packers matchup. Eagles rookie DT Jordan Davis (ankle) will be sidelined for the fourth straight game. … For the Packers, LB De’Vondre Campbell (knee) has missed three in a row and is questionable for Sunday’s game. Backup CB Shemar Jean-Charles (ankle) also is questionable after sitting for the past four games. … WR Romeo Doubs (ankle) has missed Green Bay’s past two games.

SERIES NOTES: The Packers lead the series 28-17 and have won the past three meetings in Philadelphia and six of the past eight overall against the Eagles.

STATS AND STUFF: Packers QB Aaron Rodgers is fourth in the NFL with 19 TD passes, and sixth in both passing yards (2,542) and completions (243). Rodgers, who will turn 39 on Dec. 2, has 13 TDs and four interceptions over the past seven games, six of which have been losses. … Green Bay has a minus-41 in points differential, having scored 202 points and allowed 243. … The Packers rank second in the NFL behind Kansas City with a 16-4 prime-time record since 2017. That includes an 8-2 mark on Sunday night. … The three-time defending NFC North champion Packers are in danger of missing the playoffs and might need to win each of their final six regular-season games just to reach the postseason. They won 13 games in each of the first three seasons under fourth-year coach Matt LaFleur. … Eagles CB CJ Gardner-Johnson has an NFL-best six interceptions. … The Eagles have started 9-1 for the sixth time in franchise history. On the previous occasions, they twice won an NFL title (1949 & 1960), once were victorious in the Super Bowl (2017) and twice lost in the Super Bowl (1980 & 2004). … Edge rusher Haason Reddick leads the Eagles with 7½ sacks, and his three strip-sacks are tied for the league lead. … Philadelphia wants to induct former defensive linemen Trent Cole and Hugh Douglas into the club’s Hall of Fame at halftime.

FANTASY TIP: Fantasy owners with Hurts have been reveling in the QB’s success this season, and they should keep him in the lineup against the Packers. Although Green Bay’s defense is good, particularly against the pass, Hurts has shown all season the ability to exploit opponents’ weaknesses.