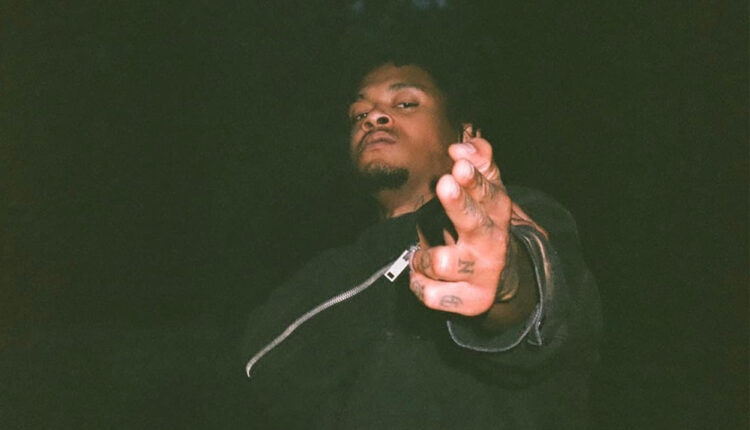 The MC and visual artist released his debut mixtape, “A Self Gang,” in April.

When Nino Carter talks about making his debut mixtape A Self Gang, he repeatedly talks about giving things away. Not giving away in the sense of generosity, but in the sense of purging or surrendering the dark things he’s been carrying around, shedding the weight of an all too recent past. The rapper, producer, and visual artist does that with a grim single-mindedness. “You won’t catch me off topic, you can’t spar with me,” Carter raps on “Chop’s & Yop’s,” amid a barrage of kinetically structured verses that cut through a bleak fog of violence and power.

“Everything that I rapped about on that project is completely inverted about how I feel as a person. I feel like I gave it, I want to say to God, honestly,” Carter says. “I feel like if I wrote it down and spoke about it, and if I got all the bad juju in me that I felt and just put it on wax, and then I can give it away and never look back.”

These nine tracks clock in under 20 minutes: no fat, no diversions. There’s one feature on the whole release, from Grand Rapids, Michigan rapper AK Bandamont, on “Tekken Tag.” Carter and his production partner Majio made two of the beats (“Chop’s & Yop’s” and “900”), and used beats from several other producers (Redda, CNOTE, Reuel, ProdigyBeatz, Carlo Anthony) for the rest, but the beats sit cohesively together to create an arc of simmering tension. All the choices Carter makes here reflect his desire to make an immediate impression in a world of short attention spans, and at the same time express something bigger than the scope of one single.

Lines like “I use my fangs to get a meal / Kill the snakes and kill the eels,” from “Eels Vs. Snakes,” work at face value. It’s just that Carter is trying to give you a very vivid, very compressed portrait of where he’s not at in his life, at least anymore.

“I’m blessed to not feel like that now, as a person,” he says of the mixtape’s overall focus and mood. “It’d be very hard to make that type of project again, because I don’t feel that type of way. And I couldn’t fake those types of feelings.”

A Self Gang’s shortest track, “Carter Beats The Devil,” manages to pack the mixtape’s thematic core into one minute and 12 seconds. Near the end of the track, Carter zooms us out from the surface with vertigo-inducing conceptual leap:

I pay the fines and escape the crime, I’ve done it every time

Motherfucker’s lyin’, at least they be tryin’, their real card declined

The world is mine and the earth is dying, but we never mind

The world is mine and the earth is dyin’, there’s more than meets the eyes

Blink and you’ll miss it, but that’s heavy: “The world is mine and the Earth is dyin’.” What does getting what you want even matter amid planet-scale climate catastrophe?

“It’s almost like it’s not being taken seriously as I personally feel like it should be,” Carter says. “I mean, this is the Earth that we’re supposed to be giving to our children and our grandchildren, hopefully great-grandchildren, but the way the Earth is going, great-grandchildren might not even be in the picture… so I kind of wanting to really let people know that that’s real.”

An art piece Carter created in 2016 with the same title as the song also shares its austere execution and its keen self-awareness. Carter sees himself as “a fine artist first” and hopes the music will help draw attention to his visual art, while also complimenting it. “I’ve tried to use music as an accelerator, if you want,” he says. He’s been interested in rapping since he was a little kid, but the reference points he brings up in our interview range from painter Jean-Michel Basquiat to Portishead to fashion designer Yohji Yamamoto.

“I always look at art and fashion and design and everything as a whole and music is a part of that,” he adds. Carter describes experiencing different forms of synesthesia, and says that to him, the music on A Self Gang is a combination of gold and red. Coincidentally, you can glimpse both those colors in a shirt Carter wears in the video for “St. Mary’s Infirmary Blues.” It was even partially shot on the actual grounds of St. Mary’s Hospital in Madison.

Carter is currently thinking about either creating a “deluxe version” of A Self Gang or making a follow-up release to serve as volume 2. For now, the mixtape gives listeners plenty of nuance and contradiction to explore under its ruthless surface. Even the title, which reads like a declaration of self-reliance, is a deliberately ironic choice on Carter’s part.

“Everyone tries to credit themselves—like, ‘Oh, I did this on my own.’ But no, there’s no such thing as a self-made man on Earth,” Carter says. “Everybody needs assistance in some way, shape, or form. It’s okay. It’s really an inverted title. It’s kind of like the lyrics: it’s not the way that it really is.”

Leading Racine pediatrician says all kids should get vaccinated against COVID-19. Here’s why | Local News