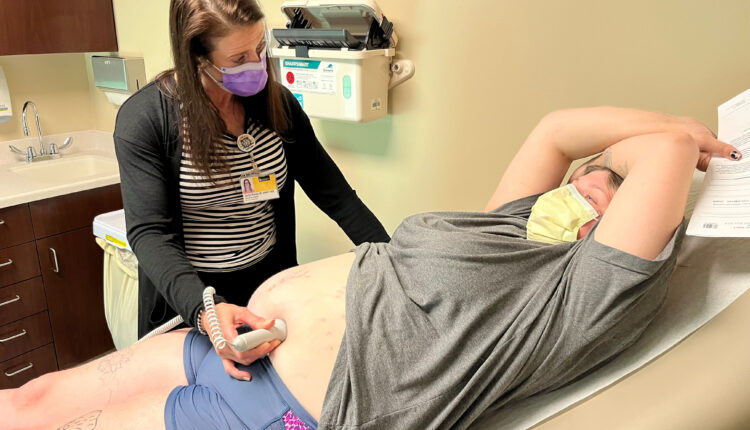 MUSCATINE, Iowa — Bailee Tordai, who was 33 weeks into her pregnancy, barely made it to the prenatal checkup. Her clunky old Jeep couldn’t complete the 2-mile trip from her house to the University of Iowa’s outreach clinic in her southeastern Iowa hometown. It was a hot June day, and a wiring problem made the Jeep conk out in the street.

A passerby helped Tordai, 22, push her stricken vehicle off the road and into a parking lot. Then she called her stepdad for a ride to the clinic.

Jaclyn Roman, a nurse midwife, walked into the exam room. “I heard your car broke down.”

“Yup. You want to buy it? Five bucks!” Tordai joked.

Her lack of reliable transportation won’t be a laughing matter in August, when her baby is due. She will need to arrange for someone to drive her about 40 miles northwest to the University of Iowa Hospitals and Clinics in Iowa City. She can’t give birth at Muscatine’s hospital because it shuttered its birthing unit in 2020.

Roman is part of an unusual effort to minimize the harm caused by such closures. She’s one of 11 certified nurse midwives from the University of Iowa who travel regularly to Muscatine and Washington, another southeastern Iowa town where the local hospital closed its birthing unit. The university’s pilot project, which is supported by a federal grant, doesn’t aim to reopen shuttered birthing units. Instead, the midwife team helps ensure area women receive related services. Last year, it served more than 500 patients in Muscatine and Washington.

Muscatine is one of hundreds of rural areas in the U.S. where hospitals have dropped birthing services during the past two decades, often because they lack obstetricians and other specialized staff members.

Hospital industry leaders say birthing units also tend to lose money, largely because of low payments from Medicaid, the public health insurance program that covers more than 40% of births in the U.S. and an even greater share in many rural areas.

The loss of labor-and-delivery services hits especially hard for women who lack resources and time to travel for care.

Muscatine, which is on the Mississippi River, has more than 23,000 residents, making it a relatively large town by Iowa standards. But its hospital is one of 41 Iowa facilities that have closed their birthing units since 2000, according to the Iowa Department of Public Health. Most were in rural areas. Just one has reopened, and only 56 Iowa hospitals now have birthing units.

The nurse midwife team’s work includes crucial prenatal checkups. Most pregnant people are supposed to have a dozen or more such appointments before giving birth. Health care providers use the checkups to track how a pregnancy is progressing and to watch for signs of high blood pressure and other problems that can lead to premature births, stillbirths, or even maternal deaths. The midwives also advise women on how to keep themselves and their babies healthy after birth.

Karen Jefferson, director of midwifery practice for the American College of Nurse-Midwives, said the University of Iowa team’s approach is an innovative way to address needs in rural areas that have lost hospital birthing units. “How wonderful would it be to see a provider in your town, instead of driving 40 miles for your prenatal visits — especially toward the end of pregnancy, when you’re going every week,” said Jefferson, who lives in rural New York.

Midwives can provide many other types of care for women and for babies. In theory, they could even open rural birthing centers outside of hospitals, Jefferson said. But they would need to overcome concerns about financing and about the availability of surgeons to do emergency cesarean sections, which she said are rarely needed in low-risk births.

The University of Iowa midwives focus on low-risk pregnancies, referring patients with significant health issues to physician specialists in Iowa City. Often, those specialists can visit with the patients and the midwives via video conference in the small-town clinics.

Tordai can attest that if patients must travel far for prenatal appointments, they’re less likely to get to them all. If she had to go to Iowa City for each of hers, repeatedly taking three hours off from her job managing a pizza restaurant would be tough, she said. On that June day her Jeep broke down, she would have canceled her appointment.

Instead, she wound up on an exam table at the Muscatine clinic listening to her baby’s heartbeat on a monitor and watching as Roman measured her belly.

“Nice job being perfect,” the midwife told her during the checkup.

Roman asked Tordai to describe her baby’s movements. “Constant,” she replied with a smile.

Roman asked whether she planned to breastfeed. Tordai said she didn’t have much luck with her first daughter, Aspen, now 4.

“Have you thought about a breastfeeding class?” the midwife asked.

“I don’t have time for that,” Tordai replied. Roman continued to coax her, noting where a breastfeeding class is available online.

Near the end of the appointment, Tordai asked Roman whether she could schedule an induced birth at the University of Iowa hospital. The midwife told her that, in general, letting labor begin on its own is better than artificially starting it.

But there was the matter of unreliable transportation. Tordai explained that scheduling the birth would help her arrange to have her mother drive her to the hospital in Iowa City. Roman agreed that transportation is a legitimate reason and arranged for an induced labor on Aug. 10.

The University of Iowa midwife team started offering services in 2020 in a clinic about 2 miles from Trinity Muscatine hospital. The hospital is owned by UnityPoint Health, a large nonprofit hospital system that blamed a lack of available obstetricians for the closure of the Muscatine birthing unit. At the time, UnityPoint leaders said they hoped to reopen the unit if they could recruit new obstetricians to the area.

Kristy Phillipson, a UnityPoint Health spokesperson, told KHN in June that the company has continued to try to recruit physicians, including for the Muscatine hospital. Although it has not reopened the birthing unit, the company regularly sends an obstetrician and other staff members to provide prenatal care and related services, she said.

Most pregnant patients from the area who choose UnityPoint for their care wind up giving birth at the system’s hospital in Bettendorf, a 45-minute drive to the east.

The University of Iowa midwife team has no plans to open its own birthing centers. But it hopes to expand its rural clinic service to other underserved towns. To do so, the university would need to hire more nurse midwives, which could be a challenge. According to the Iowa Board of Nursing, 120 licensed nurse midwives live in the state of 3 million people.

The University of Iowa plans to address that by starting the state’s first nurse midwife training program in 2023. The master’s degree program, which will emphasize rural service, will train registered nurses to become nurse midwives. It eventually could graduate eight people per year, said Amber Goodrich, a University of Iowa midwife helping lead the effort.

Those graduates could fill gaps throughout rural areas, where even more hospitals may shutter their birthing units in the coming years.