On MLK Day, a choice between fascism and democracy 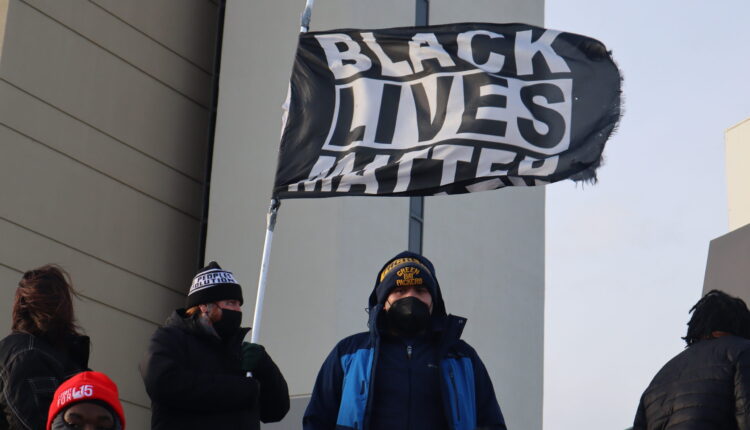 The MLK holiday is a time for service and hopefully deep reflection. People volunteer, give their time, donate money etc, but what does this holiday mean in this moment, when  democracy continues to be fragile and not accessible to everyone? Last week I wrote an Op-Ed for the Recombobulation Area about the voter suppression we continue to see, especially after Wisconsin Elections Commissioner Bob Spindell bragged about Republicans successfully suppressing turnout in Black and Hispanic communities. I mention that throughout my whole time organizing (roughly 15 years) we’re still fighting the same fights against voter suppression. I started thinking about how today’s fight compares to the fights during Martin Luther King Jr.’s  time.

Every year, we see our social media timelines flooded with quotes on MLK Day, often from folks who may not be vocal about these issues the rest of the year. We’ve even seen people like Senator Ron Johnson post about MLK Day while continuing to push for policies that further restrict access to democracy and stand in the way of true justice for all. MLK Day and Juneteenth are holidays that I personally have several feelings about. On one hand it’s a moment of pride in the work my ancestors have done and the challenges that they overcame, and on the other hand it’s frustrating that it feels like these fights will never end and people’s hollow statements of support for them don’t actually transform our communities. I find myself being most hopeful when I’m amongst community members who are also doing the same type of work. Today I’m in Washington, DC, to commemorate the holiday. I feel full, and hopeful, and grounded in my work and how I show up in this moment. I know, however, that this feeling is fleeting and I’ll snap back to reality soon and deal with yet another attack on our democracy and my community’s ability to vote.

28th August 1963: American minister and civil rights leader Dr Martin Luther King Jr (1929 – 1968) waves to the crowd of more than 200,000 people gathered on the Mall during the March on Washington after delivering his ‘I Have a Dream’ speech, Washington, DC. (Photo by Hulton Archive/Getty Images)

One of the fundamentals in organizing is agitation (obviously within reason) Agitation, and sometimes outrage, lead people to action. At BLOC, our deputy director, Keisha who oversees our Ambassador program, through which our team canvasses and organizes our community, makes sure to give our team homework assignments so we all have historical context and background that help us understand the events that brought us to where we are today. A lot of times, when we’re doing our homework assignments and our research we become agitated all over again. A couple years ago, Keisha sent the team a document listing 61 forms of voter suppression. One of the first issues I started organizing around was making sure college IDs were compliant for the incoming photo ID law. I was in the weeds of it all, and yet still, I found myself agitated even more to know there are  61 forms of voter suppression (and I’m sure there are even more now). According to the Brennan Center, since the beginning of 2021 lawmakers have passed at least 42 restrictive voting laws in 21 states. Among those laws, 33 contain at least one restrictive provision that was in effect during the 2022  midterms in 20 states. I was agitated all over again and so was our team. The question “How can they get away with this?!” kept coming back up. It’s hard to really have an answer for this outside of simply saying: white supremacy. It’s all calculated and it feels incredibly personal.  Do you know how it feels to constantly have your rights legislated, voted, or ruled away with a stroke of a pen? Far too many of us do.

It is important to note the other ways voter suppression can rear its ugly head without it seeming like a “traditional” voter suppression tactic. In 2014, I was knocking on doors for the governor’s race. I had what we would consider a “perfect door”. I spoke to a young woman who wasn’t really into voting but after a conversation about her issues and what she’d like to see from a governor, she was sold on voting. I’m talking about being really excited to vote. I was able to flip her (a source of pride for an organizer) and when I asked her her voting plan for Tuesday’s election, the excitement left her eyes. She said, “Oh, this  Tuesday? Well, I have my daughter. I don’t drive so I take the bus and I have two jobs.” As excited as she was to vote, there were all these other barriers to her participating in that election. We both were disappointed by the end of the conversation.

Nearly 10 years later that conversation sticks with me and I think of her often. It’s through stories like those that we acknowledge that having a living wage is a democracy issue, things like having a safe place to lay your head at night is a democracy issue. So not only are we dealing with elimination of absentee drop boxes, and other attacks to our voting process, but we have these structural issues as well. Milwaukee is home to the most incarcerated zip code, 53206, where many Black people haven’t had their voting rights restored yet due to mass incarceration. 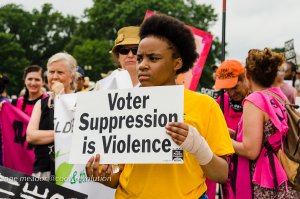 Voter Suppression is Violence by coolrevolution on Flickr CC BY-NC-ND 2.0

Our votes, our voices, our power are so much of a threat that people will stop at nothing to prevent any gains. It’s not just about my community, the attack on voting rights is everyone’s problem. We should all be speaking out and moving to action to protect our fundamental right to vote. We also see how the erosion of voting rights affects  many other communities, including the elderly who may not have a means to get an ID, the rural communities where sometimes the DMV has limited hours and is too far away to get to if you’re working, the trans community who have extra challenges and paperwork with getting an accurate ID, the disability community that continues to see challenges on election day getting needed help casting a ballot and other barriers, and so much more.

Just wrapping my head around everything is overwhelming. We know that this cannot be a moment where folks sit on the fence or on the sidelines. This moment is too important. MLK’s legacy pushed us all to do better and be better human beings. Oftentimes MLK’s legacy is softened to be more palatable for folks to digest, but MLK didn’t shy away from the hard issues and stances even if they are unpopular.

My alderman always says, “The time is always right to do what’s right.” We remember that MLK wasn’t always popular in the moment. We’ve seen the images of dogs and the brutality folks faced advocating for voting rights. But history looks back at his work favorably. We need people to act now even (and especially) when it’s difficult. People post their favorite quotes of MLK and check a box and go about their day. Let me share mine:

“First, I must confess that over the last few years I have been gravely disappointed with the white moderate. I have almost reached the regrettable conclusion that the Negro’s great stumbling block in the stride toward freedom is not the White Citizen’s Council-er or the Ku Klux Klanner, but the white moderate who is more devoted to ‘order’ than to justice; who prefers a negative peace which is the absence of tension to a positive peace which is the presence of justice; who constantly says ‘I agree with you in the goal you seek, but I can’t agree with your methods of direct action;’ who paternalistically feels he can set the timetable for another man’s freedom; who lives by the myth of time and who constantly advises the Negro to wait until a ‘more convenient season.’”

This quote hits me personally when people say that  I, or grassroots organizations, are “pushing too much” or  say things like, “We can’t support you because you support Black Lives Matter, and the Wisconsin electorate just isn’t ready for that.” Hard stop. We need to stop selling ourselves short and settling because change is hard or may ruffle some feathers. Tactics used to defend our democracy may be uncomfortable for folks but I challenge you to unpack why things like civil disobedience (that MLK engaged in) are uncomfortable.

Each year this holiday becomes more and more of an urgent call to action. This year is no different. Lean into the discomfort. Unpack your feelings and biases. Because when the choice is between fascism and democracy, there is no middle of the road.