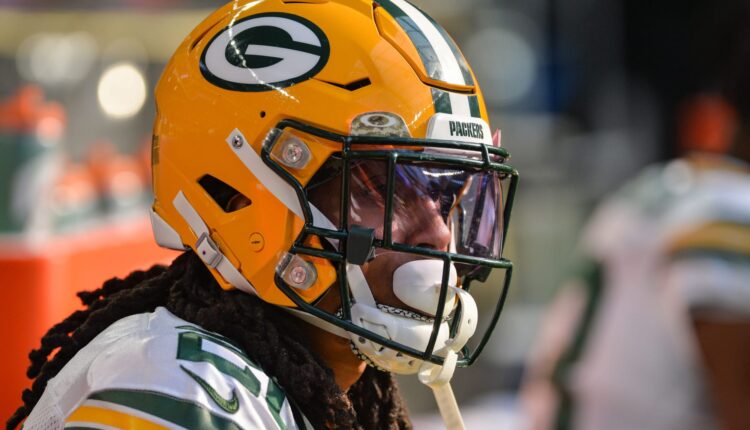 The Green Bay Packers entered the 2022 offseason with 23 total free agents that either fell into the exclusive rights, restricted, or unrestricted categories.

Of those 23, the Packers would bring back six of their eight exclusive rights free agents. Their one restricted free agent, Allen Lazard, has been tendered a contract, although he is yet to officially sign it. While De’Vondre Campbell, Rasul Douglas, and Robert Tonyan were the only unrestricted free agents re-signed.

So in total, 10 of the Green Bay Packers’ original 23 free agents are back with the team. The other 13 would hit free agency, and now with the month of June approaching, only two remain unsigned–edge rusher Chauncey Rivers and cornerback Kevin King.

Would the Green Bay Packers consider bringing back either Rivers or Kings?

As we’ve talked about on a few occasions this offseason, the Green Bay Packers edge rusher depth is a major question mark. In short, they need more out of their third and fourth rotational players than what they received a season ago.

Competing for those two rotational spots along with an additional roster spot on top of that will be Jonathan Garvin, Tipa Galeai, Randy Ramsey, Kingsley Enagbare, La’Darius Hamilton, Kobe Jones, and Chauncey Manac.

Last season, Rivers was a summer addition who surprised during training camp and the preseason as he would make the 53-man roster. Prior to his season-ending injury, Rivers was on the field for 54 defensive snaps, per PFF ($$), and totaled one pressure.

However, as we look ahead to this year’s training camp and preseason, this is already a full edge rusher room with nine players on the roster, and it’s not as if Rivers is a significant upgrade over those competing for playing time and a roster spot. So a reunion likely isn’t going to happen.

When it comes to King, perhaps his time in Green Bay has run its course, and it’s also entirely possible that he doesn’t want to return and would prefer a fresh start elsewhere. With that said — and I know many probably won’t like hearing this — but with the lack of experienced depth at the cornerback position, bringing King back on another one-year deal does have some merit.

With Rasul Douglas, Eric Stokes, and Jaire Alexander, it’s not as if King would see significant playing time as he has in the past. The best case scenario for him is that he would be the fourth or fifth cornerback on the roster–there to provide a veteran presence and some experience on the back-end of the roster, which there is little of and certainly value in having.

As of now, competing for a few roster spots and perhaps some playing time here and there is Shemar Jean-Charles, a primary slot corner with 38 career defensive snaps. Keisean Nixon, who could be a core special teams player, but defensively, has just shy of 300 total defensive snaps. And then there is Kabion Ento, Rico Gafford, and Kiondre Thomas—all with no NFL experience.

While injuries have been a part of King’s career, he would hopefully stay fresher in a significantly reduced role. And while he has taken his lumps as well, it’s not as if he hasn’t had any success either.

Just last season, King had a three-game stretch where he allowed eight receptions on 13 targets but for only 48 combined yards along with an interception. King also found some success towards the end of the season playing in the box as a hybrid defender.

Now, of course, a caveat here is that King would have to be willing to sign for a veteran minimum deal with little guarantees, but for the reasons just mentioned, this is a move worth considering.

Ultimately, my guess is that just like the other free agents that the Green Bay Packers chose to let hit free agency, both Rivers and King will end up elsewhere. But if the Packers are looking to add some depth on defense with experience in Joe Barry’s system, two options remain.