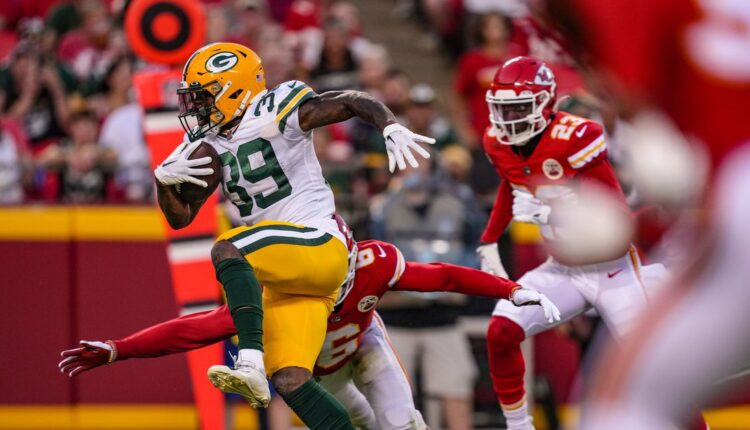 A third preseason game generally does not make for entertaining football. That was certainly the case for much of Thursday’s exhibition finale between the Green Bay Packers and Kansas City Chiefs, a contest that the Chiefs wrapped up with a 17-10 victory.

Instead, this exercise is all about player evaluation to help define the bottom of the roster, but it’s tough to know what the team will be thinking heading towards Tuesday’s roster cut deadline. That’s especially true when the team holds out one of the contenders for a roster spot almost entirely, as they did for this game at running back.

Tyler Goodson put his stamp on the battle for the Packers’ third running back spot in the first half with an impressive performance. Five of his carries went for a total of one yard but his sixth was a big one, going for a 24-yard touchdown, the first points of the game for Green Bay. Goodson also caught four passes for 22 yards before the break, showing good hands and elusiveness. However, Patrick Taylor played only a handful of snaps in the game as a whole, spending most of the contest on the sidelines with the Packers’ veterans and starters.

That may not necessarily indicate that the Packers see Goodson as their RB3 for the start of the season over Patrick Taylor, however, especially given when Taylor’s snaps came. He got playing time late in the game with the Packers trying to run a late-game comeback and . That could spell good news for his roster chances instead, as the situational workload may be indicative of the team preparing him for a regular season role.

With the running back battle revealing little, most players who appear to have roster spots locked up came out of the lineup at halftime. Only a few (including quarterback Jordan Love) played a third quarter of football before coming out before the fourth. The tape will have to decide most of the decisions for Brian Gutekunst and company, as there were few standout performances among the second and third stringers in this game.

In fact, the Packers’ most impressive player on Thursday night may have been veteran punter Pat O’Donnell. He had multiple punts of 60-plus yards and averaged a whopping 58.3 gross yards on six attempts. However, he appeared to be outkicking his coverage early — either by design or by accident — as those boots went for a net average of just 36.7 yards thanks to a whopping 118 yards of returns for the Chiefs.

The game started out with a three-and-out for the Packers on their opening drive as they struggled to move the ball until the end of the first quarter. The Chiefs didn’t fare much better, but were at least able to salvage a field goal out of one of their early drives to make it a 3-0 game early on.

Green Bay’s final drive of the first quarter started deep in their own territory, but a solid run followed by a play-action pass to Romeo Doubs helped get the Packers into field goal range heading into the second quarter. Goodson capped off the drive with a terrific run, spinning off a tackle attempt and fighting into the end zone for a 24-yard touchdown to give the Packers a 7-3 lead. He made a number of impressive catches in the first half, making tacklers would-be miss and making a decent case for a roster spot while Taylor stayed mainly on the sidelines.

That lead didn’t last long, however. The Chiefs drove down the field and then found tight end Matt Bushman wide open down the field with busted coverage for a 54-yard touchdown, taking a 10-7 lead. Rookie safety Tariq Carpenter was the primary responsible party on the score, letting Bushman run right by him to get open up the left sideline.

Jordan Love started to heat up on the ensuing drive, finding Samari Toure and Amari Rodgers for a handful of first downs and big plays to drive the ball all the way down the field into the red zone. The drive sputtered at the goal line, however, leading to a game-tying field goal from new kicker Ramiz Ahmed. Love would get the Packers going on a two-minute drive late in the first half, finding Tyler Davis for a big gain. With just seconds left in the half, however, he threw deep over the middle to tight end Alize Mack in triple coverage and was intercepted, leading to a kneel-down by the Chiefs to take the game to halftime.

Kansas City took the lead back quickly out of the half. Kiondre Thomas, fighting with Rico Gafford for a roster spot at cornerback, failed to pick up Daurice Fountain coming around the formation in motion, and the Chiefs receiver picked up 29 yards on a catch up the sideline, taking the ball down to the two- yard line. The Chiefs punched it in one play later as Bushman scored his second touchdown of the day with Micah Abernathy narrowly missing breaking up a pass into the flat for the score that would prove to be the final margin of victory for Kansas City.

Arguably the best play in the second half came from Jack Heflin, who burst in unblocked and stuffed a 4th-down run late in the third quarter as the Chiefs forgot about him entirely. That turned the football back over to Green Bay at their own 26-yard line, but a quick three-and-out by Love and the offense stymied any momentum that had shifted in Green Bay’s favor.

The two teams traded punts throughout the third and fourth quarters as the Packers brought on Danny Etling and the third-stringers on offense. Etling had the occasional nice throw, finding Ishmael Hyman on a YOLO ball that was wiped out by a penalty and hitting Samori Toure over the middle for a big gain.

The Etling-led offense led one final drive late in the game, with the Packers bringing in Patrick Taylor to play running back over the final four minutes of the contest. Down a touchdown, Taylor came on and helped the offense move the ball into Chiefs territory with a few tough runs and receptions on dump-off passes. The last-ditch effort came on a 4th-and-3 at the Kansas City 19 with 36 seconds left, but Etling’s pass to Samori Toure was incomplete — despite what appeared to be a clear but uncalled pass interference penalty on safety Devon Key.

Green Bay finishes the preseason with a 1-2 record, while the Chiefs improve to 2-1 this August. Both teams, along with other 30 franchises in the NFL, will need to cut their rosters down from 80 players to 53 by 4:00 PM Eastern on Tuesday.

Man charged in shooting that left 3 injured outside Kenosha bar