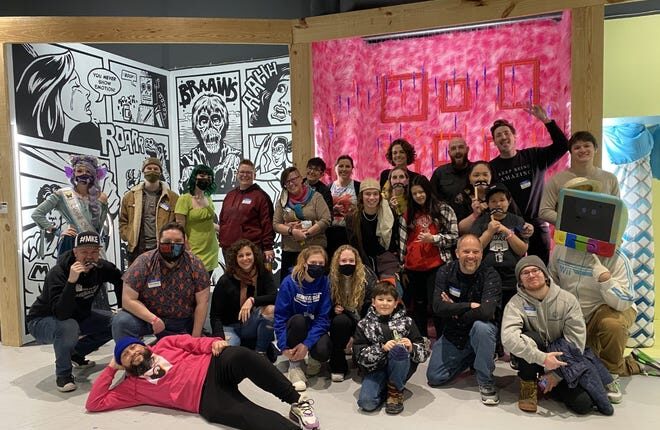 Social media content creators and influencers tend to spend a good chunk of time behind screens.

A popular Milwaukee TikToker has created a local community for them — to meet, network, troubleshoot, share ideas and collab — offline and in person.

Maybe you saw him judge this summer’s Red Bull Flugtag in Milwaukee, used one of his GIFs (which have over 260 million views) or are one of the more than 181,100 TikTok followers who’ve watched him explore and highlight the restaurants, food events and unique experiences Milwaukee offers.

JMatt initially launched the HashtagMKE community in 2017 to connect with other social media professionals. At that time, he was a digital media specialist for SaintA (now Wellpoint Care Network) and also working part-time at 103.7 KISS FM as an on-air personality.

A lot of smaller companies and brands in the area had marketing teams of one to three people, he said.

And when JMatt would attend area networking events, he said, he would usually find finance industry folks… and few individuals in his field.

So, he took it upon himself to fill those voids.

He did that — and continues to do that — by organizing free monthly social media-focused meetups across Milwaukee.

As JMatt’s popularity on TikTok has grown, so have his socials — expanding to include influencers with the followings of all sizes, social media enthusiasts, photographers, web developers and many others.

How the meetups work, have grown

Over the years, the meetups have grown from networking events to each social having its own theme.

“I basically host events that I would want to attend myself,” JMatt said.

Topics have included influencer marketing, foodies, video creation, how to create better content from your phone and more. About twice a year, free professional headshots are offered.

“We invite local experts to come and be available,” JMatt said. “We don’t do panels or presentations. It’s just simply: Show up, these people will be there, ask them your questions that you have directly, and just have a casual conversation.”

Matt Curtis, a senior content strategist for Hoffman York, was one of four people who attended JMatt’s inaugural event in January 2017. Relatively new to the area, he was looking for networking opportunities and had connected with JMatt on Twitter.

Since then, the community has grown about 10 times in size, and Curtis has gone to just about every social.

“Having all these people from all these different avenues, these walks of life and these professions able to give their insight and their information on these platforms that are developing and changing so rapidly in real time is really impactful and helpful,” Curtis said.

Prior to the COVID-19 pandemic, the meetups were drawing between 50 and 75 people, according to JMatt.

That’s a testament to JMatt’s “welcoming” and “hands-on” approach to running the group, Curtis said.

At each meetup — held from 6 to 8 pm the second Thursday of the month — JMatt greets every person at the door, whether it’s their first or 20th time attending.

He then asks what they want to get out of the meetup or who he can connect them with.

Any time JMatt sees two new people connecting or exchanging contact info at one of his events, he said it’s like a “pat on the back.”

Milwaukee resident Tia Derflinger checked out her first HashtagMKE event in the spring of 2018 after coming across an Instagram post about the community. She was slightly apprehensive — “when you put yourself in a crowd of people, it can be a little nerve-wracking,” she said.

Those nerves she had quickly disappeared.

“Everyone was really welcoming and really talkative,” she said. “There’s a lot of mingling. It didn’t feel overwhelming when I got there.”

Since no one in her circle at that time was interested in content creation, she wanted to meet people who shared that passion and to talk through some Instagram ideas. Her Instagram account, @midwestgirladventures, is a compilation of her adventures, from Milwaukee to around the world.

From being a part of the group over the years, she’s been able to learn how to promote and grow her account and its following, get feedback on her content, and form many friendships.

“I think that meeting with other content creators in Milwaukee has helped grow the account,” she said. “We all kind of keep tabs on each other and support each other.”

JMatt himself is a success story of the community’s networking at work.

In 2020, Entercom made pandemic cuts and JMatt lost his “dream job” at KISS FM, being the midday on-air personality and digital program director.

Curtis let him know about an opening where he worked for a senior content strategist. JMatt went on to land the gig.

Seeing how social media stans are brought together through his HashtagMKE meetups, JMatt decided to launch a similar space for the local TikTok community.

And he wanted to support Milwaukeeans in need while doing so.

JMatt tested out this idea for the first time in October 2021, then had a larger-scale TikTok meetup in February 2022 at 3rd Street Market Hall.

It drew more than 40 attendees, who brought more than 125 donations for Riverwest Food Pantry (now Kinship Community Food Center). And Palermo’s Pizza matched their donations $10 for every item up to $1,000, JMatt said.

“It’s something we need to be donating to year-round and not just when the holidays are around and we’re feeling in that giving mood,” he said. “I really wanted to find (an organization) that serviced the community directly … I wanted to make sure if we were bringing people together here in the city of Milwaukee — given that my TikTok content is so focused on the city of Milwaukee — I wanted to make sure that what we raised stayed here.”

For these meetups, JMatt is picking family-friendly spots so that younger creators can be a part of them too.

“The interesting thing about TikTok is that it has such an age range,” JMatt said. “I didn’t want anyone to feel excluded.”

“If you want to come and create a TikTok while you’re at the event, there’s opportunities throughout the venue,” he said.

Registration for the event can be done at bit.ly/3T4Skwn, but people are welcome to just show up, JMatt said. It’s “super casual.”

When people arrive, they can make a nametag so people know they’re part of the group. They can just drop by or stay the whole time.

A list of TikTokers that plan to stop by can be found on the event’s webpage. If someone is a follower of one of the about 15 featured TikTokers and wants to meet them, the event is for them as well, JMatt said.

Attendees are asked to bring non-perishable food items to the Kinship Community Food Center. Palermo’s Pizza will once again match donations $10 for every item donated up to $1,000, he said.

When asked why giving back is important to him, JMatt brought up what a friend told him a decade ago that has stuck with him ever since.

“When people have a voice, people need to use it for something impactful instead of just self promotion,” JMatt said. “If you have a voice, use that voice in a positive way.”

He carries that motto into how he uses his platforms, especially Instagram.

Using social media to help others

Around the time HashtagMKE got started, JMatt was challenged by a friend to do the “22 Pushup Challenge,” which brings awareness to veteran suicide and prevention.

At the time, that number was representative of the number of veterans who died by suicide each day, he explained.

Participants do 22 pushups a day for 22 days.

“I wasn’t even sure I could do 22 pushups on the first day,” JMatt said.

He shares videos of himself on Instagram doing the pushups all over the city, from on stage during a Summerfest show to outside Fiserv Forum.

This is one of his ways of regularly sharing mental health resources with his followers, he said, including the National Suicide Prevention Lifeline (988) and the Crisis Text Line (Text HELLO to 741-741).

“It was a way for me to take ownership of my own mental health struggles and in the process I became more of a public-facing mental health advocate,” he said.

To keep up with JMatt, follow him on TikTok, tiktok.com/@jmattmke, or Instagram, instagram.com/jmattmke. And for more information on HashtagMKE, visit hashtagmke.com.