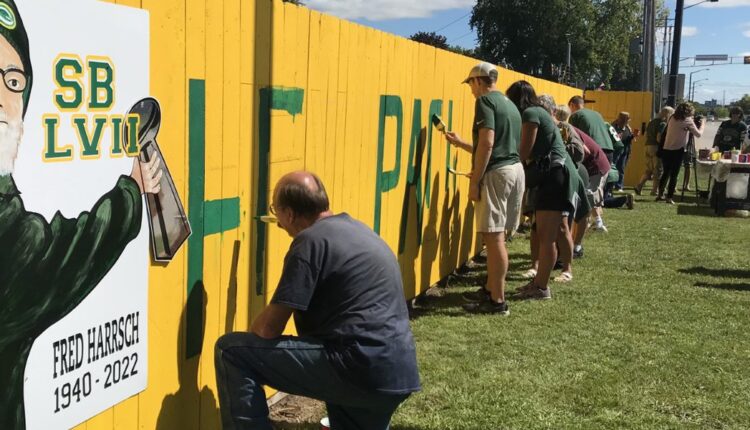 GREEN BAY, Wis. (WBAY) – The Packers may open the regular season on the road in Minnesota, on Sunday, but Titletown is getting ready for football.

In the shadows of Lambeau Field, at 1177 Shadow Lane, sits a ranch house decorated with plenty of green and gold. But, it’s the fence in the backyard of the property — across the street from Lambeau Field — that really means something to Packers fans.

“If you’re a true Packer fan, you put it on your bucket list and stuff,” says David Fenner of Green Bay.

On Labor Day, and for decades before, Packers fans, and even team officials, have shown up at this house, with paint brushes in hand, to participate in the annual fence painting tradition. “I did paint a lot. It was a high school job when I was in high school. They make it very easy for you,” says Packers president and CEO Mark Murphy.

A slogan on the fence serves as inspiration for the coming year. According to Josh Viste from Green Bay, ”It was always something to look forward to every time we made a trip to Green Bay. Now that Green is home we still continue to look forward to seeing what’s going to be printed on there and just how, as we see everybody coming down Oneida to Lombardi here everyone wants to honk and to see it. It really draws an eye.”

This year’s fence and the slogan it will carry throughout the season is about so much more than just football.

Freddy, is Fred Harrsch, a New Jersey native, who as a child in the 1950’s, grew to love the Green Bay Packers. His friend, Jim Pecard, says, “His lifelong dream was to spend the last few chapters of his life here in Green Bay. And when the opportunity came to buy this house, on Shadow Lane, Fred jumped on it.”

For more than 20 years he owned the house, home of the “official” Packers fence. Harrsch passed away earlier this year, but his family is making sure his legacy and love for the Packers live on.

And while the fence this year may be a tribute to Fred Harrsch, all of Packers Nation hopes the team can bring the Lombardi Trophy back to Titletown.