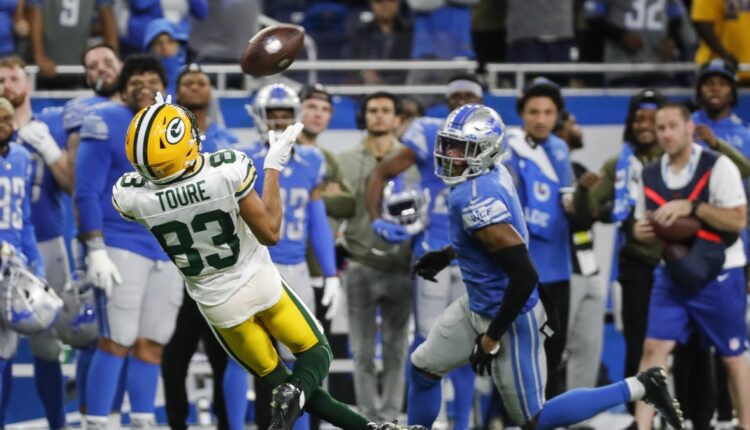 “Obviously, Sammy’s had a pretty good history in this league. He’s got some juice still left in him, I think,” general manager Brian Gutekunst said before the draft in April.

After years of injuries, Watkins needed the Packers to revive his career.

“I told the coaches, ‘My back is against the wall,'” Watkins said during the June minicamp. “My career hasn’t been what I projected it to be, and it’s a great opportunity for me to come here, play hard, catch a ton of balls, compete at the highest level and win games and fight to stay healthy. That’s been the knock on my career – to stay on the field. I think this is the best place to stay healthy, stay on the field and catch a lot of balls.”

Watkins’ back is no longer against the wall. It should be pressed against the back of the bench.

There’s no glee in that statement. It’s not celebrating someone else’s misfortune. The fourth pick of the 2014 NFL Draft, Watkins once upon a time was a really good receiver. Injuries have sapped him of that “juice” that Gutekunst referenced. Watkins didn’t come to Green Bay to grab some easy money. He’s thoughtful and honest. He really wanted to make it work, for the good of the team and himself.

However, since catching a 55-yard bomb from Aaron Rodgers to help finish off the Bears in Week 2, Watkins’ career has hit its typical downward spiral. He injured a hamstring at practice the following week and missed four games. In five games back in the lineup, Watkins caught seven passes for 95 yards.

In his return to Buffalo in Week 8, a game that meant so much to him, he caught a 3-yard pass to convert the first third-down of the game. And that was it for his 52 snaps. The following week at Detroit, he caught one pass for 9 yards in 60 snaps, with two botched assignments looming large in that 15-9 loss. In the loss to Tennessee on Thursday, he played 22 snaps and didn’t catch either of his two targets.

“This season’s been weird,” Watkins said before the Dallas game. “It’s football, first of all. Injuries, nicks and bruises, they’re going to happen. Seems like as soon as I start feeling good, it’s another thing that you have to focus on that slows you down mentally. But you’ve got to stay positive and get through this tough patch and, hopefully, a win would do that for not just the organization but for this team and the players around. That’ll move all the injuries and the hurt and the pain away from us.”

Since his return in Week 7, Watkins is one of 90 receivers to be targeted at least 10 times in the passing game. According to Pro Football Focus, he is 81st with 0.90 yards per pass route, 89th with a drop rate of 22.2 percent and 84th with a catch rate of 46.7 percent.

After setting career lows with 27 receptions, 394 yards and one touchdown last year for Baltimore, Watkins has 13 receptions for 206 yards and zero touchdowns this season. He hasn’t turned around his career. He hasn’t helped the Packers succeed without Adams.

“Sammy, he’s a warrior,” coach Matt LaFleur said before the Dallas game. “I think he’s battling through some bumps and bruises, and I think that tends to hinder your ability to go out there and be the type of receiver that we all know he is. Not to say that it’s been bad. He hasn’t got a lot of opportunity, either.

“He’s a guy that we’re hoping that we can get him healthy to back where he was, and we’ll see where it goes, but he’s a guy that we definitely have a lot of confidence in. Early in the year, when we were producing much better on offense, he was a big reason for that. We’ve got to try to reacclimate him back to our offense because we need him to be a big part of it.”

The need for Watkins to be a “big part” of the offense potentially was true a couple weeks ago. It’s not true anymore. As long as there’s a glimmer of life in the Packers’ playoff hopes, LaFleur said he’s going to play to win and not play to get young players experience for 2023. Nonetheless, it’s time to give more snaps to rookie Samori Toure, the last pick in a promising draft class.

Over the last five weeks, Watkins and Toure have each played in four games. Getting about half as many snaps, Toure has caught 4-of-8 targets for 75 yards with zero drops compared to 4-of-12 targets for 48 yards and two drops for Watkins. For whatever the Packers will lose in reading defenses and blocking, they’ll gain in explosiveness and upside. To state the obvious, Toure may or may not be part of the future at receiver. Watkins definitely isn’t.

Toure has shed his Capt. Casual nickname and is practicing with the urgency desired by LaFleur and Rodgers. He had the second-reaction touchdown vs Buffalo and an acrobatic deep catch vs Detroit.

“I’m definitely happy with my progress,” he said last week. “My hard work is coming to fruition. If you have good practice habits and you’re doing everything the right way with your routine, it shows.”

It’s time for him to play and to grow, not just with an eye toward the future but with an eye on the Eagles on Sunday night.

“I think every week we’ll have a plan,” LaFleur said on Friday when asked about Watkins getting 22 snaps to Toure’s four vs. Tennessee. “I think he’s another guy that we’ve got to definitely rotate into the mix a little bit more.”

Ten reasons why Packers are 4-7

Grading the Packers’ loss to the Titans

The dynasty that wasn’t over

Aaron Rodgers fails to “play up to my potential”