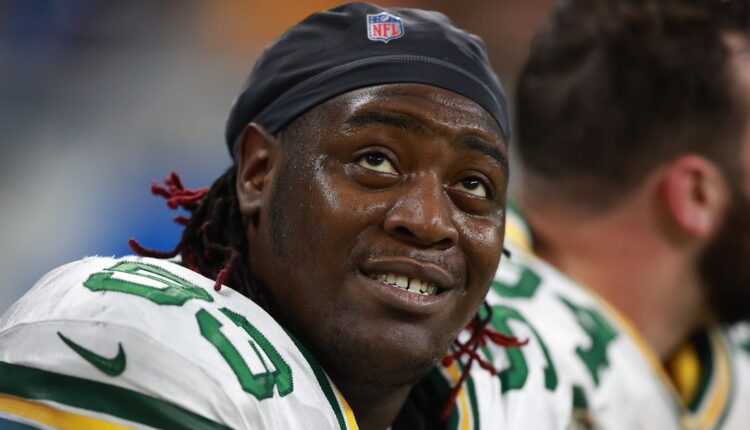 The Green Bay Packers opened up their 2022 preseason schedule on Friday evening with a 28-21 loss to the San Francisco 49ers, but the final result mattered far less than the process and the game film put up by the players up and down the roster. Jordan Love’s first significant action since last year’s season finale was an up and down affair, but rookie wideout Romeo Doubs showed flashes of the ability that has earned him a sizeable amount of hype this summer.

On defense, the Packers sat nearly every key player, with the only expected regular season starter to play being rookie linebacker Quay Walker. Fellow rookie first-rounder Devonte Wyatt was deactivated for the game shortly beforehand, so his NFL debut will need to wait another week. That in part allowed TJ Slaton, one of the Packers’ 2021 draft picks, to put up a big game.

The Packers rotated through significantly on defense, but they did give the current starting offensive line about an entire half of playing time while they try to establish the team’s best five. Here’s a look at how the playing time broke down for the Packers’ on Friday.

Note that for the preseason, we will designate the players who were in the starting lineup in italics.

The judgment of Love’s game is very much in the eye of the beholder. Love completed two very nice touchdown passes, showing good accuracy and decision-making on both. The box score is deceptive as he threw three interceptions, but two were drops by receivers and a third was the result of a poor route. However, he also had a few other negatives that did not show up in the box score either, hence the mixed reviews.

Etling had a nearly-perfect passer rating against the 49ers’ third-stringers, completing six of eight passes for 123 yards and a touchdown.

The Packers’ got the running game going early with Goodson, who had 12 carries in the game — almost double the next-closest (Baylor, 7). He only averaged 3.1 yards per carry, but had a few nice runs. He also had an explosive play as a receiver, picking up 23 yards on a screen pass in the first half.

Taylor returned to practice during the week and was second up on the list, but had just 10 yards on three carries. Baylor’s seven carried went for 9 yards while Williams had the only explosive run (a 25-yarder) to a total of 29 yards on three attempts. Baylor had the single biggest play of the day for the Packers, however, with a 68-yard gain on one of his two catches.

With the Packers’ top three of Allen Lazard, Randall Cobb, and Sammy Watkins sitting out, Doubs and Winfree got the start and had most of the early action. Doubs by far led the team in targets, seeing seven balls thrown his way. He had one brutal drop and had the ball taken from him in midair on what turned out to be an interception after a replay review, but he also had a few touch catches. His 33-yard touchdown was a thing of beauty, however.

Winfree caught all three of his targets for 27 yards, including an absurd catch on a tipped ball that flew several feet into the air. Rodgers’ only catch was a 22-yard score from Etling, a nice swing pass into the flat that saw him burst upfield and make an acrobatic dive for the pylon.

Two other rookies had solid debuts as well, as Toure, the 7th-round pick, caught three of four passes for 42 yards while undrafted Danny Davis had two grabs for 45 yards, including a 33-yard touchdown of his own.

The Packers got only modest receiving production from their tight ends in this game, as Deguara had the only two catches from the group, both on Jordan Love play-action rollouts. Davis had a terrible drop that was one of Love’s interceptions.

The Packers rolled out their first-line unit of Nijman, Runyan, Myers, Hanson, and Newman (from left to right) for most of the first half. They kept Love largely protected, with the quarterback being pressured on only four of 26 dropbacks (per Pro Football Focus). Tom spent most of his time at right tackle, where he looked solid, while Hanson slid inside to center when Myers came out of the game.

Slayton jumped Ford in the rotation over the last week and ended up playing all but eight defensive snaps in this game. He had a nice performance with six tackles (one TFL) and some pressure on the quarterback.

Slaton, however, was arguably the star of the Packers’ defense in the first half. He played especially well, showing improved pressure up the middle and disengaging well from blockers while mainly lining up at nose tackle. Heflin had four tackles and a TFL in the game as well.

It was a short day for the Packers’ “starters” in this game at this spot, as Garvin and Galeai clearly look to be the OLB3 and OLB4 behind Rashan Gary and Preston Smith. The Packers instead took a long look at Enagbare, who finished with three tackles, including a sack and a second quarterback hit. It was a decent enough debut for the rookie, who is looking to take a step now that real action has begun.

Galeai and Jones each had a sack as well, with that trio account for all of the hits on 49ers’ QBs in the game.

Walker started the game with the green dot, as the Packers decided to have him call the plays on defense to get him familiar with those responsibilities. That job will surely belong to De’Vondre Campbell come week one, but it’s not a bad plan to let the rookie try it out in case he is called upon to do so at some point in his first season. McDuffie started next to him, however, and played much deeper into the game while tying for the team lead with six tackles.

The Packers had their issues at safety in this game, particularly with Leavitt in coverage. He got burned for one long touchdown, but he also suffered a shoulder injury that could make him miss significant time. That may open up some more opportunities for the other players down the depth chart, and it would not be a shock to see the Packers add at this position this week.

In the box score, Carpenter had four total tackles while Leavitt added three but added a forced fumble that was recovered by Barnes.

Gafford being CB5 (behind the trio of starters and Jean-Charles) is impressive for the former wide receiver, and his speed is clearly a boon both on defense and on special teams. Unfortunately, he slipped and gave up a long touchdown of his own and will continue to be in a tough battle for a roster spot.

The Packers rotated Nixon in a slot corner for much of this game, keeping Jean-Charles on the boundary, where he played in college. The 2021 draft pick played well for much of the game, as did most of the corners.