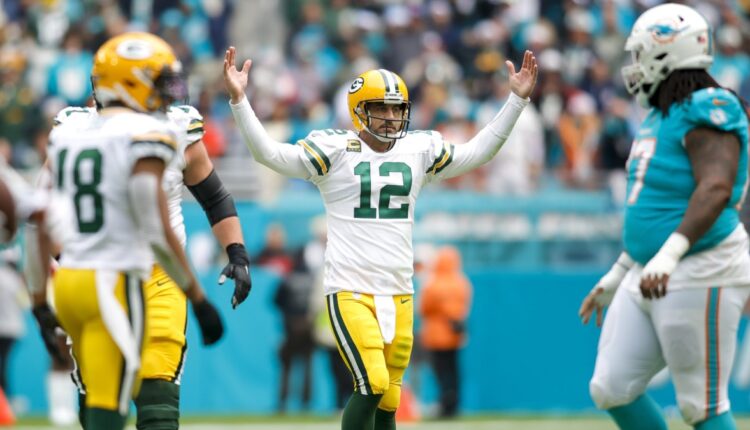 GREEN BAY, Wis. – With Sunday’s victory over the Miami Dolphins, the Green Bay Packers won three in a row. According to ESPN Stats and Information, they have a 37 percent chance of reaching the NFL playoffs. Oddsmakers have favored Green Bay to win the final spot.

If the Packers do run the table, get a little more help and indeed grab that last wild-card spot, so what?

It would be a heck of a feat, to be sure. With a 4-8 record after seven losses in a span of eight games, the questions—at least the sane questions—weren’t about how they’d make the playoffs. Rather, when should Jordan Love take over at quarterback? Would they get a top 10 draft pick? Would Joe Barry be fired tomorrow or the next day?

To be in the conversation for the playoffs with two games to go is a testament to coach Matt LaFleur, the team’s leadership and the talent on the roster.

Still, this is Titletown. On the scoreboard in the south end zone are the years of the Packers’ 13 world championships. There are no mentions of division titles, wild-card berths or winning seasons.

Since winning the Super Bowl in 2010, Green Bay has reached the playoffs nine times. Who cares if the Packers make it to the playoffs again, only to get bounced in the wild-card or divisional round?

Green Bay’s defense came up big in a 26-20 victory over the Dolphins on Christmas. The Packers needed Rasul Douglas’ interception, the team’s fourth takeaway of the day and third interception in as many series, to clinch a victory that should never have needed a clinching interception.

I get it, style points don’t matter. There is no such column in the NFL standings. The playoffs are determined by wins and losses and not some committee checking out strength of schedule and decisiveness of wins.

But, if you’re being honest and taking a step back from the playoff race, does this look like a team capable of winning a Super Bowl? Because that’s the point for a team that’s built to win today, right?

The winning streak started at Chicago against the downtrodden the Bears. Green Bay needed an 18-0 fourth quarterer to escape with a victory against a team that had traded its top two defenders and had four-fifths of the starting secondary out with injuries.

After the bye, Green Bay returned home and beat the woeful Rams. Green Bay needed a pair of third-quarter touchdowns to pull away from a team with an all-star team out of the lineup due to injuries.

If that’s not enough, the Packers failed on fourth-and-1 from Miami’s 37 early in the second quarter when Rodgers overthrew Christian Watson for what should have been a touchdown.

On TV, the commentators said several times that’s not the type of throw Rodgers misses. But the reality is he’s missed too many of those this season. Similarly, after Nixon’s long kickoff return, Rodgers took a horrendous sack on second down when a pass to Watson might have produced a touchdown or, at least, prevented a 13-yard loss.

For Green Bay to not just get to the playoffs but make some noise in the playoffs, they’re going to have to raise their level of play another couple notches. That starts with an offense that is 19th on third down, 24th in the red zone and 32nd in goal-to-go.

Those chickens almost came home to roost on Sunday, when Green Bay was 2-of-14 on third down and 2-of-5 in the red zone. In 2020, when Nathaniel Hackett was offensive coordinator and the Packers were on their way to the No. 1 seed and NFL scoring title, Green Bay set a league record by scoring touchdowns on 80 percent of its red-zone trips.

It was the “gold zone” back then, Austin Powers in Goldmember the inspiration and Goldmember’s “I love gold!” playing on the video board. Now, the red zone has been the dead zone, a potentially fatal flaw against the better opponents that would await in the postseason.

Credit to Green Bay’s defense for rising to the occasion at Miami. Tua Tagovailoa isn’t a great quarterback but he was No. 1 in the NFL in passer rating entering Sunday. With the season on the line, Jaire Alexander, De’Vondre Campbell and Douglas snared interceptions in the fourth quarter.

Chances are the likes of Philadelphia’s Jalen Hurts, Minnesota’s Kirk Cousins ​​and Dallas’ Dak Prescott aren’t going to be quite as giving in the playoffs. So, if the Packers really are going to make a run, the offense must find the consistency that’s escaped it throughout the season. That starts with Aaron Jones and Watson getting healthy and Rodgers capitalizing on his opportunities.

“I don’t think we’ve struggled with confidence but definitely haven’t had a lot of believers outside of the locker room, I don’t think, so maybe this will give us a couple on the bandwagon,” Rodgers said.

As it’s always been, it will be up to Rodgers to make the magic. Sunday against the Vikings, back at Lambeau Field, would be a fine place to start.

The latest from the NFC playoff race

Packers get plenty of help in NFC playoff race

Holiday Classic tips off at both Parkside and Carthage Tuesday