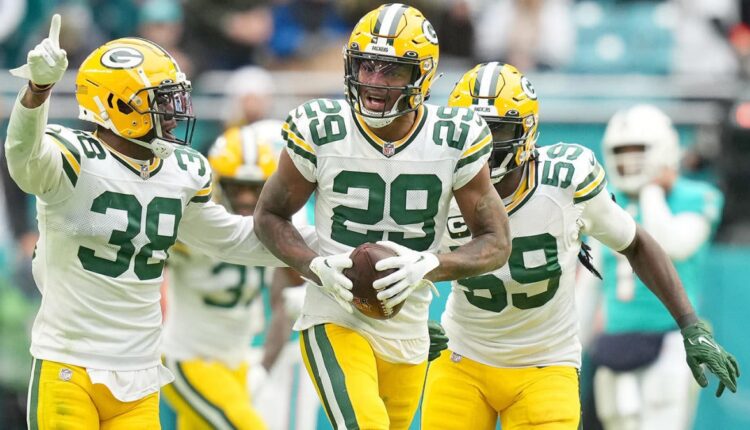 The Green Bay Packers entered Week 16 with their playoff hopes looking slim, needing not only to win out, but also receive plenty of help from other teams. The Packers received plenty of Christmas Eve presents, getting the losses around the NFL that they needed, and they were able to make the most of that assistance with a come-from-behind 26-20 victory in Miami against the host Dolphins. Green Bay didn’t take their first lead until a Mason Crosby 28-yard field goal following a Tua Tagovailoa interception put the Packers on top 23-20 with 11:45 left in the game. Green Bay trailed by as many as 10, 20-10.

The Packers defense buckled many times as both Dolphins speedsters, wide receivers Tyreek Hill (four catches, 103 yards) and Jaylen Waddle (five catches, 143 yards and an 84-yard touchdown) totaled over 100 yards receiving, but they broke the Dolphins’ passing game at just the right times. Green Bay cornerback Jaire Alexander corralled Tagovailoa’s first interception early in the fourth quarter, and middle linebacker De’Vondre Campbell flashed out of nowhere to intercept the Dolphins quarterback with just over six minutes left in the game.

Green Bay squandered multiple chances to come away with touchdowns in the first half for a variety of reasons — red zone sacks, overthrows resulting in turnovers on downs, and even a fake punt gone wrong, and the same held true in the second half. Green Bay came away with two Mason Crosby field goals, a combined six points, as drives stalled in the red zone whether it be passes or runs coming up just a few yards short of the line to gain on multiple occasions. Their red zone struggles opened the door for Tagovailoa to redeem himself and end the Dolphins’ three-game losing streak.

However, Tagovailoa ended the game with his third interception in a row as Packers cornerback Rasul Douglas stepped in front of the throw with 1:34 left. Aaron Rodgers had an inefficient day, throwing for 238 passing yards, a touchdown and an interception on 24-of-38 passing. Running back AJ Dillon leading the Packers with 36 yards rushing and a touchdown on the ground spells out how tough of a day it was for Green Bay’s offense. However, their much-maligned defense won the game and kept their playoff hopes alive.

The Packers, winners of three in a row, improve to 7-8 and have a real shot at the playoffs, sitting just a half-game behind the Commanders for the seventh and final NFC wild card. Green Bay needs to win its last two games against the Minnesota Vikings and the Detroit Lions, both at Lambeau Field while needing Washington to lose just one of their final two. The Dolphins have lost four in a row, but they still have control of the AFC’s No. 7 seeds.

Why the Packers won

Most years, this section of a Packers win story would include many lines about Aaron Rodgers’ heroic brilliance. On Christmas Day, the Packers defense put on the cape and played the Superman role by shutting out the Dolphins’ explosive offense in the second half, courtesy of three consecutive interceptions of Tagovailoa to seal the comeback. It was a pretty impressive turnaround after they allowed Miami wide receiver Jaylen Waddle to take a crossing route over the middle and run away for an 84-yard receiving score, the longest offensive touchdown scored on Christmas Day in NFL history.

Rodgers improves to 15-0 in December starts since Matt LaFleur became the Packers head coach in 2019, and he has thrown 32 passing touchdowns and five interceptions for a 103.7 passer rating in those 15 games. One thing to keep an eye on for the Packers is their breakout rookie wide receiver Christian Watson, who left the Christmas Day matchup with a hip injury.

Why the Dolphins lost

Turnovers, turnovers, turnovers and turnovers. The Dolphins were getting whatever they wanted offensively on Sunday until running back Raheem Mostert’s fumble at the end of the first half. That allowed the Packers to end the half with a field goal that trimmed Miami’s lead to seven, 20-13. Tua Tagovailoa’s three consecutive interceptions led to two Packers field goals, and the end of the game. Teams that lose the turnover battle more often than not lose the game.

This first turning point was Tagovailoa’s second of three late-game interceptions, and it was gigantic. This giveaway allowed the Packers to apply even more pressure on the Dolphins by forcing them to burn all of their timeouts as Green Bay went up six after another field goal. By the time Miami got the ball back, it needed a touchdown to win and under two minutes to do so.

The second turning point was Tagovailoa’s third and final interception that sealed the Packers’ victory. It appeared Tua assumed tight end Mike Gesicki was going to be open down the right sideline, but ball-hawking cornerback Rasul Douglas was lurking in zone coverage and came away with the football. These two plays could give the Green and Gold’s defense a new level of belief entering their final two games, both must-wins.

Play of the game

Having weapons like Tyreek Hill and Jaylen Waddle is an embarrassment of riches. A defense could be well in front of either, yet both Hill and Waddle can make decently positioned defenders look like they’re in the wrong. That was the case as Waddle caught a crossing route underneath the Packers’ zone coverage and ran away for the 84-yard score. All Green Bay’s defense could do what tip their hat and shrug. The play also stands as the most explosive offensive touchdown on Christmas Day in league history.

The Packers host the 12-3, NFC North champion Minnesota Vikings in Week 17, and the Dolphins travel to Foxborough to face the 7-8 New England Patriots in a battle for AFC playoff position.