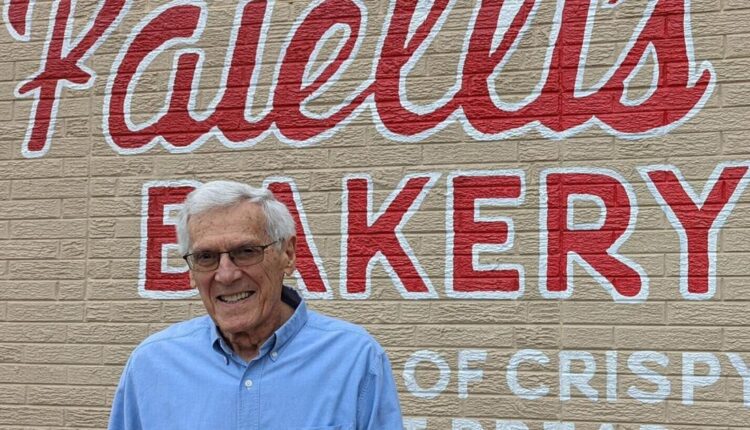 Dino Paielli was, literally, born into the family bakery business.

And after a century of turning out breads, rolls, cakes, pies and cookies, Paielli’s Bakery celebrates its 100th anniversary on Saturday.

“I’ve been here my whole life,” Paielli said, recalling how he was born 90 years ago above his parents’ bakery.

Paielli, who still comes to work, marvels at all the changes in the bakery business.

“Back in the 1950s, we had no machines,” he said while chatting in the bakery’s breakroom Monday morning. “We had a small place, and we had to do the work all by hand.”

His father, Santé, moved and expanded the operation in the 1950s.

With 5,000 square feet, the bakery — now a mainstay on the corner of 60th Street and 39th Avenue — added a big oven “so we could make more, and better, products,” Paielli said. (That oven is still at the bakery, which now covers 20,000 square feet.)

Adding the big oven was just one of the many additions and expansions to the bakery over the past 100 years.

“A lot of automation” is how Mark Paielli, Dino’s son, describes the changes in the business.

He and his brother, Dave, have both been at the bakery for close to half a century, continuing the family legacy.

When you visited Paielli’s Bakery in the 1950s, Dino Paielli recalled, “we made five bread items, plus a few cakes and pies, and no donuts. Those sweets developed over the years.” (No Kringles then, either. Those ovals, too, came later.)

Today, a big seller is the bakery’s signature Cyclops donut.

The donut — named for the one-eyed giant Cyclops in Greek mythology — comes covered in chocolate and packed with a rich creamy filling (the “eye”) in the middle.

There’s no question the Cyclops is a favorite, but its origins remain shrouded in mystery.

Anne Wasilevich, who worked at Paielli’s during from 1975 to ’77 during high school, said at a bakery reunion in August that “our group of workers invented the Cyclops donut.”

“We had a big tub of white frosting,” she said, “and we put it into the center of the donut to enjoy in the breakroom.”

However, Mark Paielli recalls two brothers who worked at the bakery “coming back from a trip Up North and telling us about a donut they had seen there, called a honeymooner, with frosting in the ‘hole.’”

Dave Paielli also looks for donut ideas when he travels.

“I like to go into little bakeries,” he said, “and see what they have.”

He recalls seeing a “stop-and-go” variation of the Cyclops in Florida, with red and/or green frosting in the “eye” of the donut. Hence, the “stop-and-go” name, referring to traffic lights.

However the Cyclops came to be, it has since cemented its status at Paielli’s.

As for Dino Paielli, he’s partial to “our hard-crust rolls and bread. And I love our one pound sliced ​​Italian bread. It fits into the toaster just right. We even used to say our bakery was ‘the toast of the town.’”

To keep customers coming back, the bakery adapts “to changing tastes,” Dave Paielli said. “We don’t make as much of the old favorites, like Easter breads and stollen, because the younger generation doesn’t want it. Grab and go is really what younger people want now.”

Adapting to change, the Paiellis said, is the key to surviving in a competitive business.

“We’re learning new things all the time,” said Mark Paielli, who sits on the board of directors for a bakery co-op group based in Appleton.

“It all goes back to our customers,” Dino Paielli said. “We try never to say no to a request. If we get calls for a different product, we try to develop it.”

A huge part of the business is one the customers at the front counter never see.

“We had two restaurant accounts in 1951,” Dino Paielli said. “That has really developed. Our wholesale business, supplying restaurants, is different from what you see in our bakery and at the grocery stores.”

A huge part of their success, all three Paiellis agree, is the bakery’s employees.

“We work side-by-side with our employees,” Dino said. “A lot of them are still here after 30, 40 or 50 years, but others have gone on to start their own businesses. They learned how to work here.”

Mark recalls “being mentored by my dad and Bob Santelli,” who was a baker at Paielli’s for more than 44 years.

Mark and Dave Paielli are continuing a tradition started by Dino and his late brother, Dominic, who worked side by side for 45 years.

“We talked about things and made decisions together,” Dino said of running a business with his brother.

However, Dino said the bakery really owes its existence to his mother, Matilda.

“We wouldn’t be here if she didn’t know how to run the business,” he recalled. “When my dad was very ill in 1941, she kept everything going. She was the key.”

As for Dino Paielli, over the decades he “learned every job and worked every shift here.”

Mark’s daughter, Nicole, works in the bakery office, and Dave, too, has children.

So… is the next generation in place?

All three men hope the family bakery keeps going for the next century.

And if co-founder Santé Paielli walked into the business today, with its 70-some employees and huge ovens and freezers (not to mention the array of donuts and kringles), he would likely sigh and utter his signature phrase: “I never saw look for a thing.”

Packers’ 2023 opponents have as many questions as Green Bay does