Pence was within 40 feet of mob inflamed by Trump, Jan. 6 committee reveals 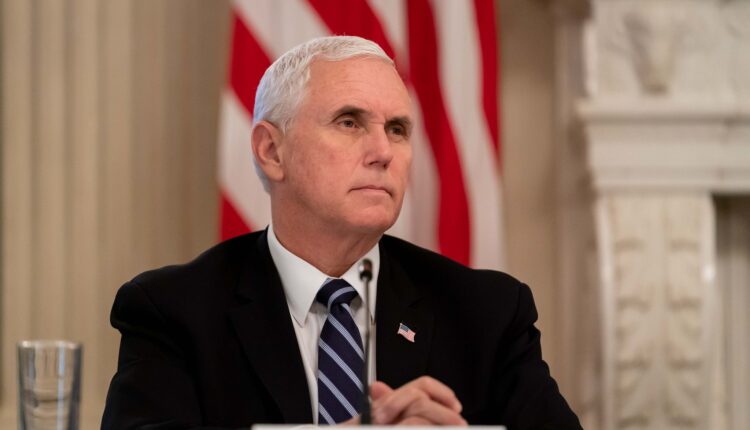 The private and public conflict between Donald Trump and Mike Pence over certifying the 2020 election results put the vice president within steps of the Jan. 6 attackers, the U.S. House committee investigating the insurrection said Thursday.

As the mob approached the U.S. Senate chamber in the Capitol, the vice president’s Secret Service retinue hustled him into a secure location. Pence’s and the rioters’ paths were within 40 feet of each other, said U.S. Rep. Pete Aguilar, a California Democrat, who led much of the committee questioning in the panel’s third public hearing.

Then-President Trump put Pence in danger by pressing him to execute a plan championed by John Eastman, an outside Trump attorney, to reject slates of electors from seven states that Trump lost: Arizona, Georgia, Michigan, New Mexico, Nevada, Pennsylvania and Wisconsin.

Pence viewed that plan as illegal and wrong and consistently told Trump as much, people close to Pence told the House Select Committee to Investigate the Jan. 6, 2021, Attack on the U.S. Capitol. Pence later publicly declared he was duty-bound to respect the will of voters and not single-handedly overturn the election.

“President Trump is wrong,” Pence said in February 2022 remarks to the conservative Federalist Society that the committee replayed Thursday.

Committee Chairman Bennie G. Thompson said he didn’t often agree with Pence, but that he endorsed that view.

“He resisted the pressure,” the Mississippi Democrat said of Pence. “He knew it was illegal. He knew it was wrong. We are fortunate for Mr. Pence’s courage on Jan. 6. Our democracy came dangerously close to catastrophe. That courage put him in tremendous danger.”

Emails obtained by the panel included one in which Eastman implored Greg Jacob, an attorney for Pence, to have the vice president commit a “minor violation” under election law and throw out contested electors.

The committee also showed an email from Eastman to Trump attorney Rudy Giuliani in which Eastman asked for a presidential pardon. In a deposition where the committee sought to question him, Eastman invoked his constitutional right against self-incrimination 100 times, committee member Aguilar said.

Eastman himself conceded in front of Trump on Jan. 4 that his plan was illegal, Marc Short, Pence’s chief of staff, testified in a taped deposition.

The plan to replace legitimate electors with slates of fake electors who would support Trump gained steam in early January, driving a wedge between Trump and Pence.

Pence told the president several times the plan was unconstitutional and illegal.

“He articulated to me that no, he wouldn’t want that power bestowed upon any one person,” Short said.

In a late afternoon call on Jan. 5 with Trump, Pence, Short and Jacob, Eastman said that he understood Pence would not reject legitimate electors.

On the morning of Jan. 6, before addressing supporters on the White House Ellipse, Trump phoned Pence, who moved into a room to be alone to take the call.

Witnesses to Trump’s end of the call, including his daughter Ivanka Trump, characterized it as “heated.”

Ivanka Trump said her father’s tone was different from what she’d “heard him take with the vice president before.”

The previous day, staffs of Trump and Pence argued over a statement the Trump campaign released responding to accurate reporting in the New York Times that Pence did not believe he had the legal authority to certify alternate electors.

The campaign statement said the president and vice president were in agreement that Pence had the power to act.

“We were shocked and disappointed because whoever had written and put that statement out, it was categorically untrue,” Jacob said.

Under questioning from the committee, Miller said he and Trump created the statement together and the final product reflected what Trump wanted it to say.

At the center of the rift between Trump and his loyal understudy of four years was the plan Eastman was advocating to replace electors from seven states with fake slates that would support Trump.

Arizona was the first state alphabetically where Eastman sought to replace the electors. The others were not named Thursday but have previously been reported to be Georgia, Michigan, New Mexico, Nevada, Pennsylvania and Wisconsin.

Mere hours after the attack, just before midnight on Jan. 6, Eastman implored Jacob in writing to have Pence commit a “minor violation” of the Electoral Count Act and adjourn the Senate for 10 days to allow for state legislatures to finish investigations into untrue fraud claims.

Told in the following days of that email, Pence responded, “That’s rubber-room stuff,” according to Jacob.

“I interpreted that to mean that after having seen play out what happens when you convince people that there is a decision to be made in the Capitol legitimately about who is to be the president and the consequences of that, that he was still pushing us to do what he had been asking us to do for the previous two days,” Jacob said. “That that was certifiably crazy.”

Eastman’s continued efforts to overturn the election, even after the riot and after Pence certified the results, were astounding to others in the White House.

Eric Herschmann, a White House attorney said Eastman called him on Jan. 7 about preserving evidence in Georgia for an appeal.

“Are you out of your f-ing mind?” Herschmann said he responded. “Because I only want to hear two words coming out of your mouth from now on: orderly transition.”

In his speech the morning of Jan. 6, Trump invoked Pence several times. Drafts of the speech did not mention the vice president, but Trump added in lines and ad-libbed more, Aguilar said. Hearings later this month will detail that process further, he said.

“All Mike Pence has to do is send it back to the states to recertify, and we become president and you are the happiest people,” he told his supporters.

At 2:24 p.m., Trump tweeted a criticism of Pence for not seeking to execute the fake-elector strategy. That tweet inflamed the mob that had by then breached the Capitol.

A confidential informant associated with the far-right Proud Boys group — which the panel has said was among the organizers of attempts to violently overturn the election — told the FBI the group would have killed Pence at the Capitol if they were able, Aguilar said, citing an affidavit.

Secret Service agents tried to get Pence into a car to leave the Capitol complex, Jacob said.

Pence refused, saying he did not want the world “to see the vice president of the United States fleeing the United States Capitol, and he was determined that we would complete the work that we had set out to do that day,” Jacob said. “And rioters who had breached the Capitol would not have the satisfaction of disrupting the proceedings beyond the day on which they were supposed to be completed.”

Instead, Pence stayed in the secure location, where he monitored events of the day. The committee showed a photograph, made public for the first time, of Pence in the secure area watching a Trump video praising the rioters but telling them to leave the Capitol.

A Sexual Assault and Years of Calls From Debt Collectors