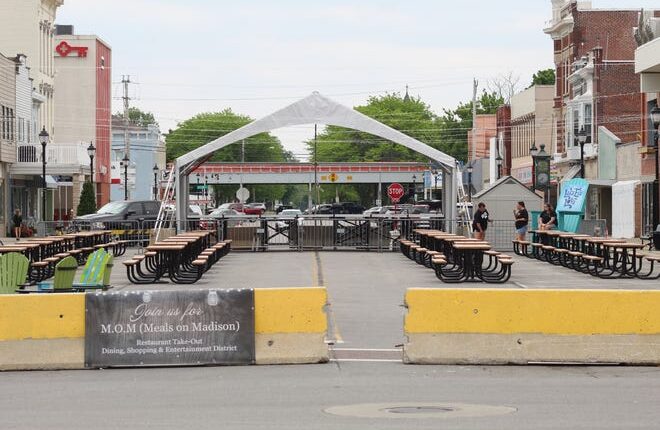 PORT CLINTON — The popular Meals on Madison returns this year to downtown Port Clinton, with a full music schedule planned for residents and visitors who want to relax and enjoy an afternoon or evening on Madison Street.

The event involves the 100 block of Madison Street in Port Clinton being cordoned off and used as an outdoor recreational and dining space for downtown patrons.

Meals on Madison, referred to as MOM, was launched by city officials in 2020 in response to Gov. Mike DeWine’s ordered shutdown of indoor dining at bars and restaurants as COVID-19 began spreading rapidly throughout Ohio, offering local businesses and their customers more available space outside.

Now recurring annually, MOM begins in the spring and runs all summer long, to early fall.

One of the most notable additions in 2021 was a stage donated by Live Nation, the largest concert promoter in the United States, alongside more picnic tables and other additional seating.

According to the Port Clinton Area Chamber of Commerce’s website, The JT Hayden project kicks off the MOM entertainment schedule Friday at 7 pm

Other musical performers scheduled for this weekend (both with 7 pm starting times) include Ron Howard & Cruisin’ on Saturday and The Bob Stevens Band on Sunday.

All full list of MOM musical entertainment and events can be found at portclintonchamber.com/meals-on-madison.html?fbclid=IwAR1A8e7IlIFeR2h96u4ScqXm3Db4o-2IU-pvkBq7jFwVi_U3fT5OgVeF7QQ.