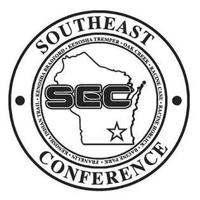 There were plenty of accolades for Racine teams on the All-Southeast Conference football team.

Horlick had eight first-team selections, including five players voted the best player at their respective positions.

The biggest award, however, went to Rebels’ senior Blake Fletcher, a linebacker who was voted the SEC Defensive Player of the Year and also the Inside Linebacker of the Year.

Feest, who also was a first-team selection on the offensive line, was the only SEC player to earn two-way first-team honors. Other Horlick players on the first team were senior offensive lineman Ben Dineen and senior defensive back Reggie Hubbard Jr.

Case had six players on the first team, led by junior Mike King, voted the co-Outside Linebacker of the Year, and sophomore Jacob Haughton, voted the Punter of the Year. Other first-team selections for the Eagles were seniors Noah Ferguson (offensive lineman) and Patrick Zimowski (outside linebacker), and juniors Latrell Herrington (wide receiver) and Termarion Brumby (defensive back).

Park head coach Morris Matsen was awarded Coach of the Year for the Panthers’ turnaround season and Park received the Team Sportsmanship Award.

Case was the only Racine team with first-team selections on the All-Southeast Conference team.

Defender Nattan Degefa and midfielder Tomas Sanchez were each named to the first team for the Eagles. Second-team selections for Case were midfielder Henry Stone, forward Corbin Bochinski and goalkeeper Griffin Meisterheim.

Honorable-mention selections were Evan Lock, Everett Eisenman and Jaden Friedrich for Horlick and Jacob Freeman, Edwin Rojas and Dom Wentorf of Park. No case players were listed for honorable mention.

Kenosha Tremper goalkeeper Ben Wajerski was voted the SEC Player of the Year, and Oak Creek’s Oscar Toscano was voted SEC Coach of the Year.

Case had one player each on the All-Southeast Conference first and second teams.

The Eagles’ Natalie Harris, a senior outside hitter, was named the All-SEC Defensive Player of the Year and earned first-team honors. Brianna Bigelow, a senior middle blocker, was named to the second team.

Honorable mention went to Katie Korth and Clara Hummer of Case, Jenna Quirk and Amaya Rodgers of Park and Myla Haubrich of Horlick.

Racine Schools had four representatives on the All-Southeast Conference first and second teams.

Case had one first-team selection, senior outside hitter Connor Sandkuhler, and senior right-side hitter Cameron Werner was named to the second team.

Horlick senior setter Joel Svatek and Park senior outside hitter Braden Roushia were each named to the second team.

Receiving honorable mentions were Luca Alvarado and Jayden Haigh of Case, Parker Jensen and Calvin Costabile of Horlick and Cameron Betker and Aiden Cardenas of Park.

Case had three runners on the All-Southeast Conference first and second teams.

Senior Amelia Wiesner for the girls and junior Carson Buckli for the boys each earned first-team honors, and junior John Merrill was named to the boys’ second team.

Horlick sophomore Giovanni Maccanelli was a second-team selection and the Rebels received the Team Sportsmanship Award.