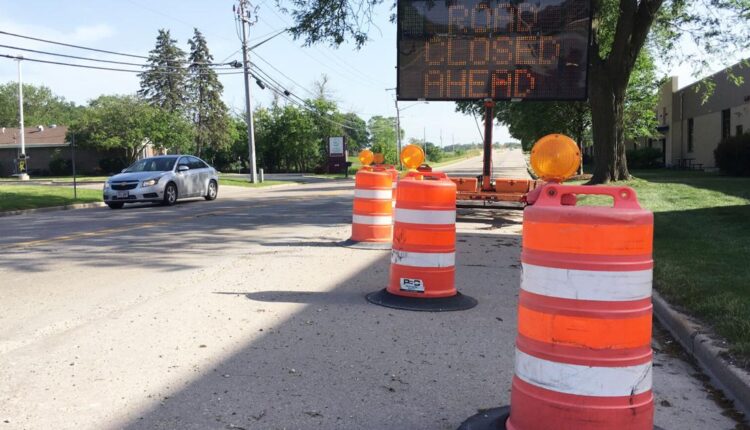 TOWN OF BURLINGTON — It could be a long, hot summer for business owners affected by a road improvement project on a major north-south thoroughfare in western Racine County.

Even before the project officially begins, businesses are reporting steep decreases in customer traffic because of road-closing signs and utility work along County Highway P, also known as McHenry Street.

Racine County crews plan to spend the summer resurfacing a two-mile stretch of the county highway, in a project that will detour traffic away from June to September. Although planners say the road will remain accessible for local access to homes and businesses, business owners say the project is being mishandled in a way that is putting their businesses in jeopardy.

Motorists traveling south from the City of Burlington on McHenry Street, also known as County P, find orange barrels and road closing signs for a highway project scheduled to continue all summer.

The roadwork near Bohners Lake just south of the City of Burlington also impacts restaurants, taverns, a church, a senior citizen home, a boat/RV dealership, an animal hospital and antique store, among others.

Among the specific complaints from business owners:

Racine County officials acknowledge some missteps on the project, although they say We Energies has been responsible for many of the problems.

Racine County illustration shows the County P construction site in red and the detours that some business owners view as excessive in blue.

Racine County illustration shows the County P construction site in red and the detours that some business owners view as excessive in blue.

Julie Anderson, the county’s director of public works and development services, said We Energies crews waited several months before deciding this spring that they wanted to perform utility work at the site before the highway work began.

The county highway project, budgeted to cost $1.5 million, was never intended to extend beyond the June-September timeframe. With the utility company getting involved in April, Anderson said: “The mess is bigger and longer that it needed to be.”

Public utilities frequently piggy-back on road projects, seizing upon the chance to repair or replace underground utility lines as long as the pavement is going to be breached for highway work.

We Energies spokeswoman Alison Trouy said the decision to make utility improvements on Highway P involved critical improvements. The company needed time to assess the project before moving forward this spring, she said.

We Energies posted the road closing signs to help its crews finish the work as quickly as possible. Efforts were made to display other signs directing local motorists to businesses and special events in the construction zone, Trouy said.

“During every construction project, we strive to work closely with all stakeholders,” she said.

Business owners said they were surprised to see We Energies crews getting started in April — two months before the businesses were told to expect work to start on the highway.

Now that the utility work is done and the county’s roadwork is about to begin, the businesses fear the disruptions are about to go from bad to worse.

Dan Wilburth, owner of The Rustic Barrel antique store, 7135 McHenry St., said he just relocated his business in April, not knowing how bad the highway project was going to get. Had he known, he could have stayed in his old location and made the move to Highway P in the fall, after the roadwork is scheduled for completion.

“It’s definitely a bummer,” he said, estimating that his customer traffic is down 90 percent since the road closing signs went up.

Wilburth questioned why traffic detours are posted before signs indicating that the road remains open for local traffic to businesses. He also said We Energies had promised to post signs listing businesses by name, to encourage customers not to take the detours.

“It’s killed our business,” he said.

The detour directs traffic onto State Highway 83 and State Highway 50, taking motorists miles away to get around the construction zone.

David Minnich, owner of Countryside Pub, 8225 McHenry St., said the detours are much more aggressive than necessary, while other routes were available to keep traffic closer.

Minnich said police officers have made matters worse by stopping some motorists and questioning them for being in the construction zone, in yet another action discouraging customers from remaining loyal to the local businesses.

Business at the Countryside Pub has fallen off about 40 percent since the project began, Minnich said.

“It’s just a cluster,” he said. “It hasn’t been handled the right way at all.”

The county roadwork is scheduled to begin June 27 and continue until Sept. 30. The county said “major” work requiring full road closure is being scheduled for after the Fourth of July holiday weekend, although access for local businesses will be maintained.

Anderson said the county had little control over how We Energies handled its portion of the project. Once the county starts work, she said, county officials will help local businesses as much as possible, including with improved signage.

“We know that there are businesses that are upset. We get that,” Anderson said. “We are trying out best.”

Kaur said she wishes government had a way of providing financial subsidies to businesses hurt by road improvement projects to offset their loss of revenue.

The operators of the Hunny Tree Mini-Mart (sometimes spelled Honey Tree), 7850 McHenry St., Town of Burlington, erect a temporary sign to encourage customers during a highway construction project that is impacting businesses along McHenry Street.

Both businesses have been hurt by the construction upheaval, and the Hunny Tree has even cut back its operating hours, closing at 9 pm or 10 pm instead of staying open until midnight.

Kaur said she and other business owners have had trouble getting information from county officials about the highway project, which she said is hitting at peak season for business.

“Everybody is frustrated, everybody is hurting,” she said. “There goes our spring, then our summer.”

Jaws of Life were used to rip all four doors off of the junk car used in the simulation Saturday in Burlington.

Nick Farvour, a junior at Burlington High school who played a “victim” in the simulation, front right, joins his fellow classmates in debriefing with a member of the Burlington Rescue Squad.

First responders prepare to load one of the “critical condition” actors onto a stretcher.

The jaws of life were used to rip all four doors off of the junk car used in the simulation.

Firefighters from Burlington attended to the scene of the simulation and used the Jaws of Life on the “crashed” car.

A police drone was used to gather aerial of the situation.

Barb Rigden, pictured at center, was an EMT Intermediate and one of the moulage artists on the scene.

One of the first officers on scene at the beginning of the simulation is pictured here.

Students from Burlington high school relax after taking part in the simulation.

Members of the Burlington Fire Department walk toward debriefing following the simulation.