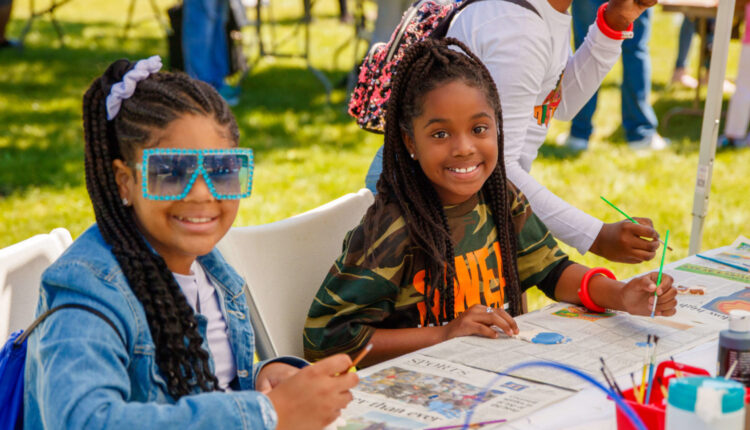 As Juneteenth festivities may have come and gone last Saturday for most, Racine recently finished wrapping up a week-long celebration.

They began with the Strength in Her Stride Cancer March the morning of the 11th, followed by the Miss Juneteenth Pageant, hosted by Professional Women’s Network for Service. Sunday afternoon saw the city hold a historic moment. Led by elected officials and Senior Pastor Melvin D. Hargrove of Zoe Outreach Ministries, the center held a flag raising ceremony. According to Lesia Hill-Driver, director of the center and chair of Juneteenth Day for approximately 25 years, “This is the first Juneteenth flag to be raised in a public building in the city of Racine.” This made the event particularly special for her. “We had African dancers and African drummers when the flag was up. So that was history. That was epic for me.”

The week continued with a variety of events, such as Monday’s youth Black history course, led by Robert Hayes, Racine Unified School District retired teacher, followed by a Q&A. Pastor Hargrove returned for a biblical black history presentation later in the night, also holding a Q&A afterwards. From Tuesday onwards, the center paired up with Chase Bank to host multiple events geared towards topics such as homebuying, financial aid and budgeting. Hill Driver worked closely with Annette Washington, Chase Bank’s community manager, to provide quality, informative workshops for the community. Both their hard work and the engagement from participants were celebrated on Friday night with “A Night to Remember” Sneakers Ball at Festival Hall. Guests were invited to dress to the nines, and complete their looks with sneakers. The inaugural event drew 330 guests, with Hill-Driver remarking, “The Sneaker Ball, ‘A Night to Remember’ was just that. It was epic.” Saturday morning, 150 youth gathered at the center for the Caron Butler Basketball Camp and the Jimmie Ward Football Camp. Both men are Racine natives and involved in professional sports: Butler serves as the assistant coach of the Miami Heat and Ward plays as a free safety for the San Francisco 49ers. Directly following the camps, the two held a Chase-sponsored fireside chat for the public, opened by Senator Tammy Baldwin. Butler and Ward were joined by Kevin Thomas, Chase Head of Community & Business Development for the Midwest, with Annette Washington moderating. Together, the men discussed topics such as the importance of education, financial literacy and making positive community change. Washington’s partnership with Hill-Driver and the community center began with an introduction from Butler himself.

It’s just nice seeing the community coming together,” Washington said. “Because there’s so much negativity out there. So many things that are going on, that sometimes we tend to not focus on the greater thing. So I’m happy that Chase has allowed me to be in this role, talk about our racial equity commitment and execute on it within the community with a partner such as Lesia.”

The center closed out the week with their official Juneteenth Day Celebration Saturday afternoon, with a drum band, numerous vendors offering food, clothing, jewelry, opportunities for community involvement, and kid-friendly activities such as face painting and a bounce house. Youth prepare to do a competing run in a bounce house at the Juneteenth Day Celebration. Photo by India McMiller Photography for JPMorgan Chase.

The year’s Juneteenth celebration theme was Stronger Together, and Hill-Driver feels the planning committee ensured this rank true over the week.

“It was proven that yes, we can get together and yes, we will work together to make it happen,” she said. Growing from a single-day Juneteenth celebration last year, to a seven-day week, Hill-Driver plans to only carry the longer festivities for years to come.

“We will continue to try to educate throughout the week and make Juneteenth Day meaningful. We have to teach our people and give them the strengths and tools to be successful.” And she doesn’t want it to stop with Racine. She hopes others will be inspired to also recognize and celebrate the holiday for all that it is, and for multiple days. “I hope cities catch on and realize that Juneteenth is more than just a party,” she said. ” I hope [celebrating for more than one day] catches and it moves out across the nation from here, because we’re only as smart as our mind as a people. We can only go as far as we educate ourselves to get. And if we’re going to be satisfied with just the status quo, we’ll never grow to be the people that we’re supposed to be.” She stressed the importance of not only educating as many people as possible about Juneteenth but also reinforcing black excellence. “We came from kings and queens, not the ideology of slaves,” she said. “We were a royal priesthood, and we need to recapture that and the only way we do that is to educate ourselves and realize who we are as a people … The mind is the key that set the captive free. So we have to teach and train our young people, so that the legacy of who we are carries on.”