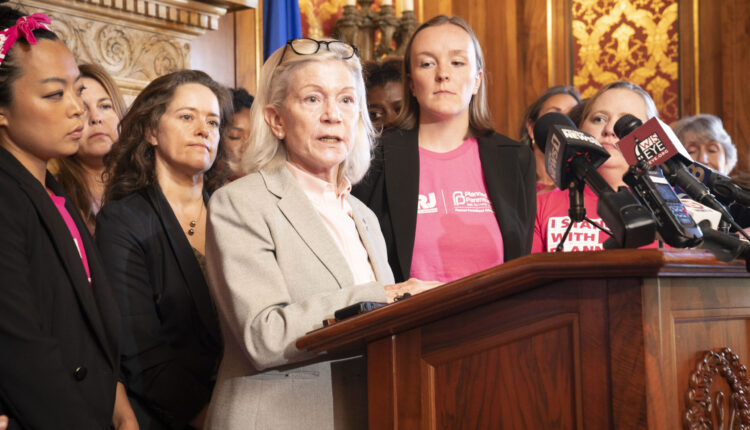 Republican leaders of the Senate and Assembly gaveled in and out of a special session called by Democratic Gov. Tony Evers in less than 30 seconds Wednesday afternoon, rejecting the governor’s call to discuss repealing Wisconsin’s 173-year-old abortion ban, which does not include exceptions for cases of rape or incest.

Anticipating that the Republicans would end the session without debate, as they have numerous times when Evers has called previous special sessions, Senate Minority Leader Janet Bewley (D-Mason) criticized Republicans’ lack of will to repeal the 1849 law at a press conference in the Capitol Wednesday morning.  “I agree with the will of the majority of Wisconsinites that abortion should be legal in all or most cases,” Bewley said. She and Assembly Minority Leader Greta Neubauer (D-Racine) cited Marquette University Law School polling data showing that more than half of Wisconsinites consistently say they want abortion to remain legal, even as the U.S. Supreme Court is expected to issue a ruling in the next few days striking down the landmark Roe v. Wade decision guaranteeing abortion rights.

“Some states in the U.S. will still have reproductive freedom when or if Roe gets overturned, because their legislators have the will to act,” Bewley said. “Unfortunately, Wisconsin will probably not be one of those states because the Republicans in our Legislature don’t have the will to act on behalf of the people of Wisconsin.”

Evers released a statement slamming Republicans in the Legislature after they closed the special session without debate. “Time and time again, the people of Wisconsin have asked Republican legislators to do what they are elected to do — to take action on pressing issues facing our state, to do the right thing, and to help the people we are elected to serve,” Evers said in the statement. “Today, they once again failed to muster the courage to perform that simple duty.”

Protesters at the Wisconsin State Capitol on June 22, 2022 | Photo by Ruth Conniff

“Republicans’ refusal to act will have real and severe consequences for all of us and the people we care most about who could see their ability to make their own reproductive healthcare decisions stripped away from them,” Evers added, noting that the U.S. Supreme Court is likely to rule “any day now.”

Senate President Chris Kapenga (R-Delafield), who gaveled in and out of the special session on the Senate side, over the vociferous protests of Democrats, tweeted afterwards: “The U.S. Supreme Court has yet to issue their opinion yet the Governor called a Special Session. This is nothing more than a calculated campaign move & the exact reason why the Legislature isn’t in session during campaign season. He’s not fooling anyone with this political stunt.”

Outside the Assembly and Senate chambers, the Capitol rotunda was filled with hundreds of people wearing pink Planned Parenthood T-shirts, chanting, “Not the court, not the state, only we decide our fate.” 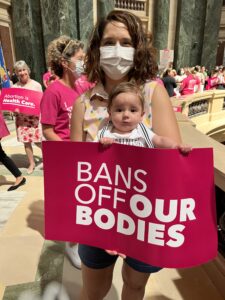 Jessica Marshall and her son Henry protest at the Capitol on June 22, 2022 | Ruth Conniff

Jessica Marshall of Madison brought her 5-month-old son Henry. “We’re here because we believe that abortion is health care,” she said. “We don’t think 200-year-old laws should be used to make decisions in 2022.”

Another protester, Bonnie Stalker, said she came because “I’m sick and tired of this happening again. I have two daughters and they ought to be able to have appropriate health care and choose what they do with their bodies. It just saddens me that we’ve come full circle.”

Despite the failure of the special session to produce results, Rep. Mark Sprietzer, who joined the protesters in the rotunda, said it was a worthwhile effort to call attention to what will happen in Wisconsin when Roe v. Wade falls.

“Even people who followed the leaked draft opinion from the Supreme Court may not understand that we have a criminal abortion ban on the books,” Sprietzer said. 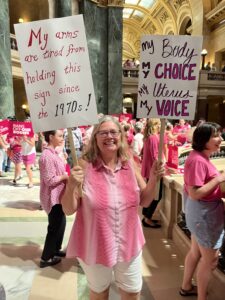 Bonnie Stalker protests at the Capitol in Madison | Ruth Conniff

Assembly Speaker Robin Vos has expressed his support for exceptions to Wisconsin’s felony abortion ban in cases of rape and incest, “so he should do something about it while Gov. Evers is here to sign a bill,” Spreitzer said. “Because the Republican candidates for governor say they don’t support those exceptions.”

During the Democrats’ morning press conference, OB-GYN doctor Eliza Bennett spoke about the difficulty of having to choose between providing care to her patients and facing a possible felony conviction under Wisconsin’s abortion ban if it comes back into effect.

“My pregnant patients are full people entitled to self-determination, and they arrive at their decisions to end pregnancies for many different reasons,” she said.

“If this law from 173 years ago comes back into effect — when women had minimal rights, no real agency or autonomy — they will be taken back to that time. They will lose their autonomy. I will lose my ability to morally and ethically care for my patients. Or, if I choose to continue my practice, caring for them in a moral and ethical manner, I will face criminal charges and jail time,” Bennett said.

Noting that the only exception under Wisconsin’s 1849 law is a provision allowing abortion to save the life of the mother, Bennett added, “The public may not realize this, but we as physicians do not know exactly when our patients are going to die.”

When patients, “especially young, pregnant women,” face severe complications in pregnancy, “we do not know specifically who will die for sure; often we do not know until it is too late,” she said. “Our standard practice at this point is to counsel patients to offer options, discuss risks and allow patients to choose the best care for themselves.” 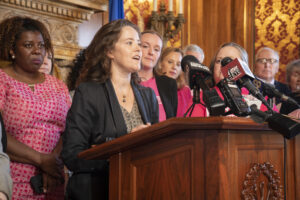 Facing the prospect of working under the 173-year-old Wisconsin abortion ban, Bennett said, she and her colleagues had been discussing what it will mean for them if Roe falls. “Do patients need to be so sick that death is nearly upon them? If I perform an abortion prior to that, will I be jailed? Fined? Will I lose my license? If I don’t, will I be negligent? Will my patients suffer irreparable harm? … This is an untenable situation for physicians and patients.”