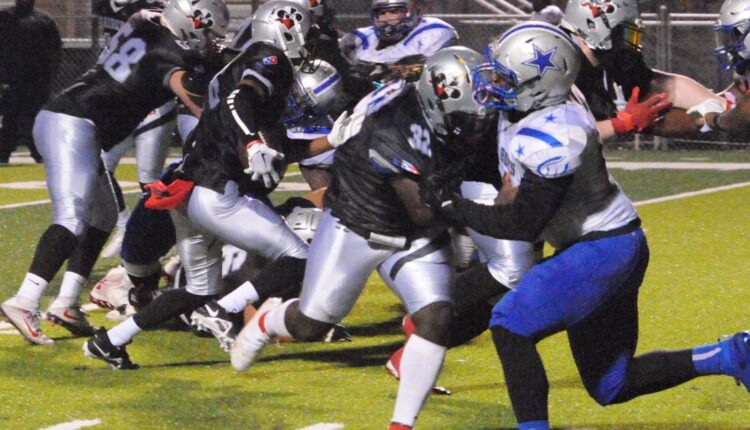 RACINE — What better way to make up for a crushing loss than with a resounding, definitive win?

That’s exactly what the Racine Raiders did Saturday night on Horlick Field.

Racine won his second game in a row and kicked off a stretch of potential revenge games with a 44-14 thrashing of the Illinois Cowboys in front of a strong crowd of 969 people. After the game, head coach Wilbert Kennedy said getting healthy on the offensive line helped lead to the easy victory.

The Raiders led only 7-6 at the end of the first quarter but bombarded the Cowboys with 37 unanswered points over the next two-and-a-half quarters to improve to 7-2 overall and 4-2 in the Mid-States Football league. It also helped that the Raiders were buoyed by more than 440 total yards and held Illinois under 200.

Plus, Robert Lewis had a pick-six, one of five interceptions for the Raiders, and Mitch Farr avenged his lackluster performance earlier in the season against the Cowboys with two touchdowns and no picks. Howard Triplett added two rushing touchdowns. It was one of those games where everything went right.

Now, the Raiders must travel for three consecutive road games, including a potential first-place showdown with the Chicago Birdgang (5-1 MSFL) before returning home for Alumni Night and the final home game on Aug. 13.

“The defensive line controlled the line of scrimmage, and they couldn’t run the ball,” Kennedy said after the game. “The offensive line did an outstanding job. Mitch had time to throw the ball. He didn’t get hurt a lot. We’re a different team when we’ve got our guys.”

After a bye week of rest, Kennedy said the guys returned to practice last Wednesday with a fire. They practiced like they wanted to play, and carried it into Saturday.

“We played with a lot of energy, a lot of tempo,” Kennedy said. “We had a great Wednesday night, and it showed. We had a lot of attitude and fire in guys’ eyes. It was great.”

“A lot of it is preparation. I got an awesome coaching staff. They’re just outstanding. They put in a lot of work for those three hours we’re together on Wednesday nights,” Kennedy added.

Key stats of the night

Farr had plenty of time to throw the ball, and it resulted in 14-for-26 passing for 287 yards and a few deep balls. Will Norwood and Jordan Payne each caught touchdowns.

Plus, the ground game was dominant. Lewis’ interception return for a score in the second quarter opened up the lead to 19-6 before an Alex Gonzalez field goal, and after that, Triplet took over. He bruised his way for scoring runs of 1 and 2 yards, and the rout was on.

Then, with a 31-7 lead in the fourth quarter and the Cowboys driving, Daquan Smith stepped up with a big interception and 57-yard return to pretty much stop any kind of comeback.

It was Smith’s second pick-off of the game, and he nearly nabbed a third late in the game but went down hard and couldn’t get up. Smith suffered what he said might be a torn ACL, and his season looks to be over .

Racine also lost key player Austin Tenner to an injury during the victory. But Smith, a 28-year-old Racine native, Case grad and Carroll College football player, is hopeful to return at some point but knows his guys will step up in his absence.

“I should’ve scored,” Smith joked about his long interception return. “I got tired, I’m old. I read the quarterback’s eyes and made the adjustment. It was my fifth interception of the season.”

Daquan Smith is helped off the field by his teammates. – Credit: Mike Ramczyk

Touching down next in Chicago

The Raiders travel to Chicago next to play the Midway Marauders, a team they beat earlier in the season 21-6, Saturday night at 7 pm

What will it take to keep this momentum going?

“Just be consistent and stick to our assignments,” Smith said. “We need to stay disciplined. Against Birdgang, we jumped balls too early, and I made some mistakes, too. Everyone is building chemistry and a brotherhood.”

Kennedy feels good about his team and believes the Raiders can win the rest of their games.

“I felt good after last week, and we’re starting to get healthy,” he said. “If we stay healthy, we’re going to be a hard out. I feel good about where we’re at.”

The Racine County Eye, which includes the Kenosha Lens, is your source for local news that serves our diverse communities. Subscribe today to stay up-to-date with local sports, business, and more.

Subscribe to the Wisco Huddle to stay up-to-date with your favorite Wisconsin high school sports.

COVID-19 cases more than double in Alabama – The Madison Record