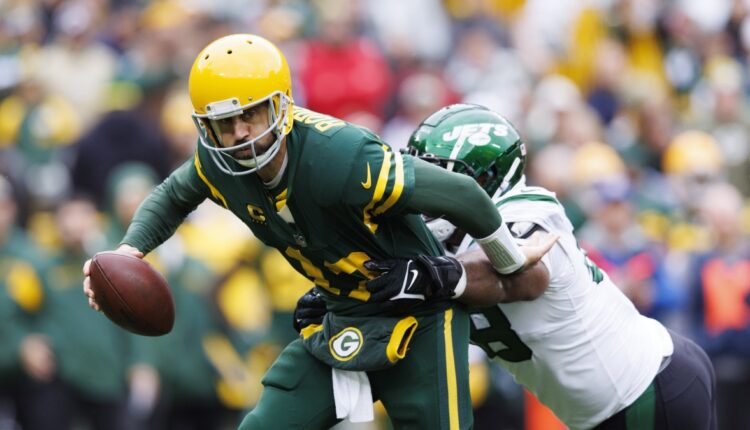 If that’s how the four-time MVP’s historic run in Titletown ends, here are seven possible landing spots. Six are from the AFC. The Packers might be hesitant to trade Rodgers to an NFC team. That’s especially true for the NFC South. All four teams might be in the quarterback market but are on Green Bay’s 2023 schedule.

Note: All salary cap figures are from OverTheCap.com.

With a talented roster, Miami is about $22.7 million over the cap and would have to restructure a bunch of big base salaries to create enough space. Quarterback Tua Tagovailoa has a below-average arm and a season filled with troubling concussions. He won eight of his first nine starts but none of his final four.

The Dolphins are coached by Mike McDaniel, who is from the Kyle Shanahan coaching tree. So, Rodgers would arrive in Miami with a grasp on his new offense and perhaps the best receiver duo in the NFL with Tyreek Hill and Jaylen Waddle. However, the Dolphins do not own a first-round pick.

Rodgers might have no interest in joining the Commanders given their ownership (embattled Daniel Snyder) and track record (no winning seasons since 2015). But they have three legit receivers with Terry McLaurin, Jahan Dotson and Curtis Samuel and a ferocious defensive front. Rodgers certainly would fire up a disillusioned fan base; only 50,000 fans showed up for Week 17 vs Cleveland.

If Washington dumps Carson Wentz, it will have about $30 million of cap space. 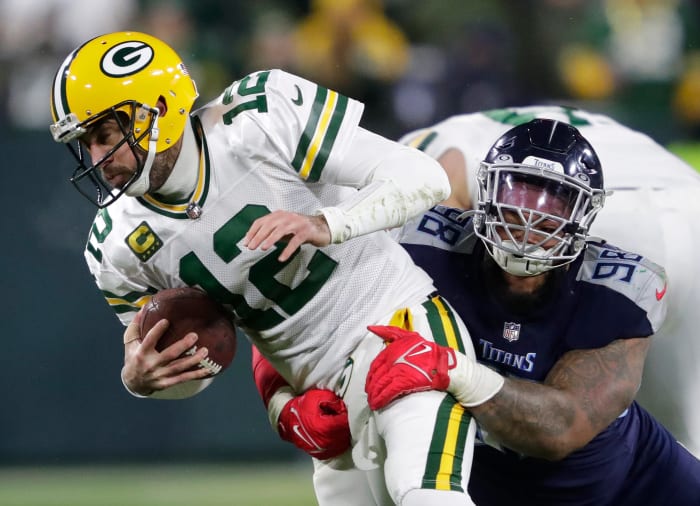 Tennessee, which went 7-10 in 2022 after going 11-5 and 12-5 the previous two seasons, is about $27.7 million over the cap. Dumping Ryan Tannehill would take care of about two-thirds of the overage and purging some overpriced veterans would take care of the rest. Fitting in Rodgers, however, would still be tricky. The Titans have a stud running back and powerhouse run defense, but the receiver corps is among the NFL’s worst.

“It’s a toughness that Mike brings, and the expectations I’m sure for them are really high,” Rodgers said. “I keep in touch with Mike throughout the year and they lost their first two games, and I think just like happens in this league there’s probably overreactions and what the hell’s going on and what are we going to do, and I think they rattled off like five or six wins in a row and kind of quieted everybody up. But they obviously have a really good football team and Mike’s a great coach.” 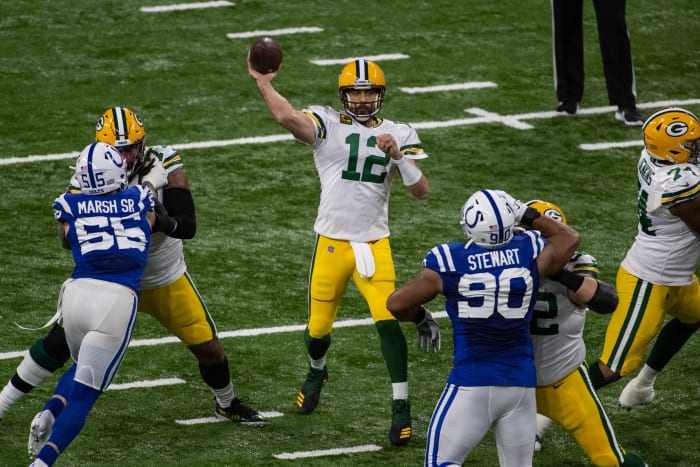 The Colts have been a hot mess since Andrew Luck’s surprise retirement. They’ve swung for the fences with veterans Philip Rivers, Carson Wentz and Matt Ryan the last three years. So, there’s a track record of going after an experienced arm. The Colts have about $5.7 million of cap space. Dumping Ryan would push that to about $23 million.

Rodgers essentially has veto power over any trade. If he doesn’t like the destination, he can say “Nah, I think I’ll retire.” Would he be interested in joining a team coming off a 4-12-1 season? Then again, owner Jim Irsay is desperate and might move heaven and earth to entice Rodgers.

Perhaps whoever they hire as a coach – Rich Bisaccia, anyone? – would intrigue Rodgers. Running back Jonathan Taylor and receivers Alec Pierce, Michael Pittman and Parris Campbell are a good starting point on offense but the defense is bad. 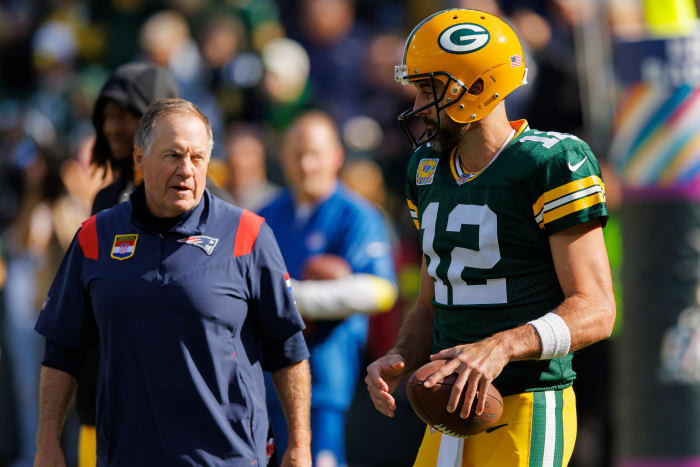 Coach Bill Belichick, who will turn 71 a couple weeks before the draft, will be entering his 23rd season as Patriots coach. At this stage of his career and his life, does he want to spin his wheels with Mac Jones, who regressed in Year 2? Belichick holds Rodgers in the highest regard.

“Certainly, Aaron is one of the best. I have a tremendous amount of respect for him,” Belichick said in a conference call with Packers beat reporters before the 2018 game. “He’s a bright guy, knows football extremely well.

“He has great, great vision. He does such a good job of seeing the field, I would say, at a rare level, and then can get the ball to any point in a hurry down the field, outside and on the run. He’s got great accuracy and decision-making. He’s a tough one. I don’t want to take anything away from any players that we’ve competed against but certainly he’s right there at the top of the list. He’s a great player – has been for a long time. I have a ton of respect for Aaron.”

The feeling is mutual, as Rodgers said before and after the game.

“Before the game, he came over and we shared some words,” Rodgers said before the Packers won this year’s clash. “It’s nice to be able to have some private conversations from time to time. And he came over, we were in the throwing lines and we had a nice embrace and shared some words back and forth.

“The truth is always easiest to say. The things I said about Bill last week I meant. The way that he coaches and the success he’s had, he’s a phenomenal leader and always has his guys ready to play. That was some of the sentiments I’m sure I echoed. The rest I’ll leave to some of the stray microphones that probably caught some of it.”

The Patriots have almost $29 million of cap space. 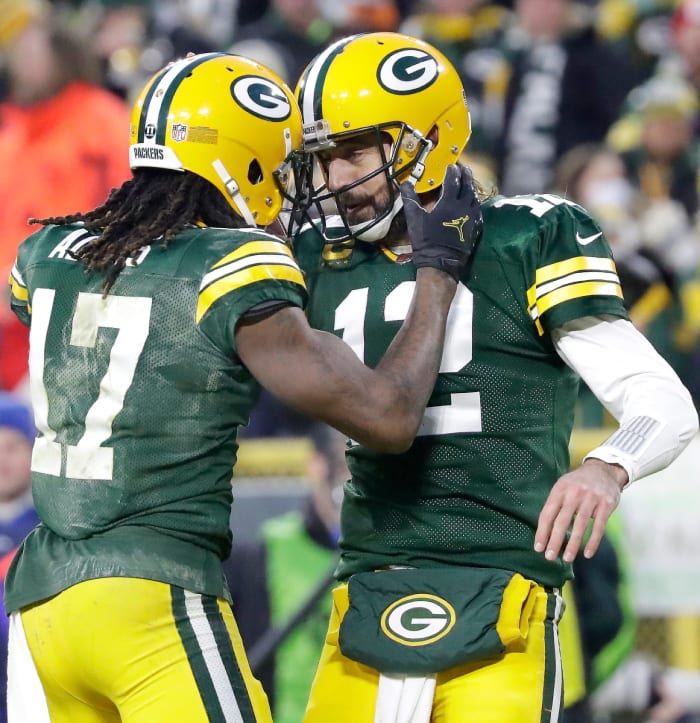 “I feel like obviously losing Davante was a big deal,” Rodgers said of the offseason trade of Davante Adams. “We didn’t fill that void. Nobody can. He’s super human. Hey it’s phenomenal. There was hope in certain things that were going to fill that void. Ultimately, that just didn’t happen.

“The things we were able to do, I think, may have been taken for granted at times, because we were able to create so many different things in the moment over the years and, especially, the last couple of years, because not much changed other than his absence from the lineup.”

Las Vegas, having given up on quarterback Derek Carr, would seem like an obvious suitor, though Tom Brady is the rumored preference. You know Rodgers would welcome a reunion with Adams. Vegas has about $11.8 million of cap space, and dumping Carr will push that to more than $40 million. 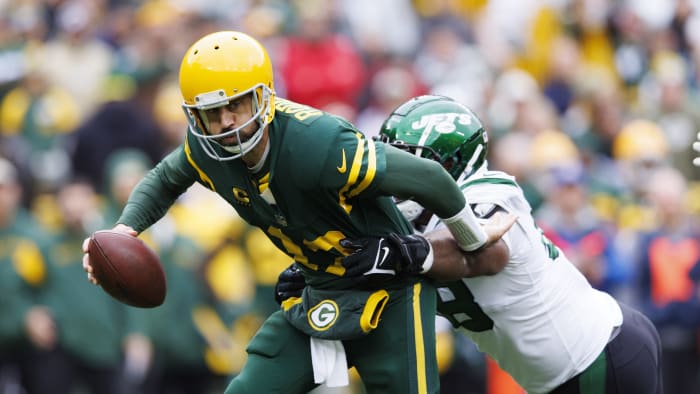 In 2008, the Packers traded Brett Favre to the Jets. Could history repeat itself?

The Jets went 7-10 in spite of Zach Wilson’s second-year struggles. Aside from quarterback, it is a talented roster. Three of the NFL’s best rookies this year were receiver Garrett Wilson, the likely offensive rookie of the year, cornerback Sauce Gardner, the likely defensive rookie of the year, and running back Breece Hall. The Jets’ defense finished fourth in points allowed, fourth in total defense and second in yards allowed per passing play.

Rodgers has a lot of respect for Jets coach Robert Saleh. Plus, Saleh has interviewed former Packers offensive coordinator Nathaniel Hackett after firing Mike LaFleur, the brother of Packers coach Matt LaFleur, from that position. Hackett would install an offense that Rodgers would know inside and out. They’d be an enticing coaching duo.

“They’re coached really well, they fly around to the football and I’m not surprised they’re 3-2,” Rodgers said before the Jets won in Week 6. “The kind of leader that Saleh is, when they get some players in – and they obviously to their football team this last year and got a lot better – it’s not surprising to me they’re 3-2 and playing well.”

The Jets are about $6.6 million over the cap but have easy paths to creating ample space.

For what it’s worth, the Packers are the betting favorite to be Rodgers’ team in 2023, with the Raiders, Jets, 49ers and Patriots rounding out the top five.

Aaron Rodgers brings the stupid out of people

Father Time sacks every quarterback; has he sacked Aaron Rodgers?

If Packers are committed to Rodgers, it’s time to trade Love

One of the worst teams money could buy

Starting Jan. 17, when there were 100 days until the start of the NFL Draft, we started our mock-worthy goal of 100 mock drafts in 100 days. Here’s the 100-day countdown series.

99 days: Trading for outside linebacker

97 days: This pick would break a long drought

Aaron Rodgers and the quarterbacks

Aaron Jones and the running backs

Christian Watson and the receivers

Robert Tonyan and the tight ends