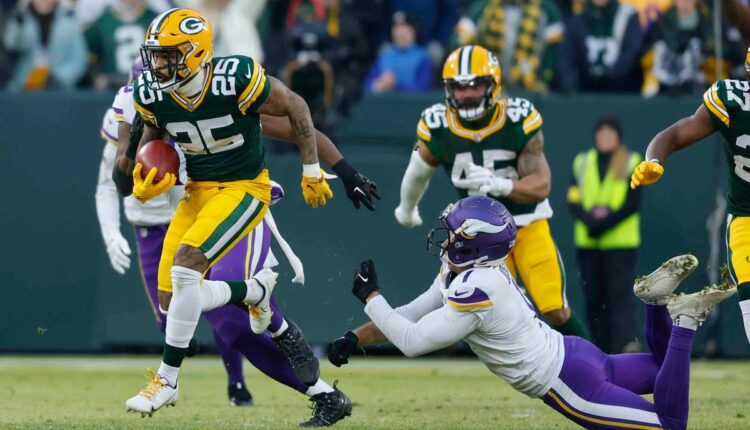 The Green Bay Packers are in salary cap hell.

Years and years of restructuring deals and kicking contracts down the road have caught up to the Packers. And now, Master Card and VISA want their money.

Perhaps the only good news is Green Bay doesn’t have a marquee free agent. But the Packers do have a handful of solid contributors — and if the majority get out of town — the roster will likely be worse in 2023.

Here’s a look at Green Bay’s unrestricted free agents, ranking them from most to least important.

Green Bay hasn’t had a return man like this in more than two decades, and finding a way to bring him back is imperative.

The website spotrac.com projects Lazard will get a contract in the three-year, $33 million range once free agency hits. If that’s the case, it’s far too rich for the Packers’ blood.

Lazard — who had 60 catches and six touchdowns in 2022 — is a solid player and respected locker room presence. But Green Bay is almost certain to go younger and cheaper at wide receiver.

Tonyan, who caught a franchise-best 11 touchdowns in 2020, goals an ACL in 2021 and didn’t have the same explosiveness this season. He finished 2022 with a respectable 53 catches, but averaged just 8.8 yards per reception and had two TDs.

Much like Lazard, Tonyan’s future in Green Bay will be based on how other teams view him. Spotrac predicts Tonyan will land a one-year, $5.1 million deal. Perhaps the Packers can make a contract like that fit. Or Green Bay could turn to the draft and select its future tight end in the early rounds.

Amos earned every penny of the four-year, $36 million deal he signed as an unrestricted free agent in March, 2019. But he’s coming off a disappointing year and turns 30 this offseason.

Green Bay is extremely thin at safety, but seems more likely to draft a replacement for Amos than to bring him back.

With 2022 first round pick Devonte Wyatt waiting in the wings, Lowry will likely be playing elsewhere in 2023.

Lowry gets a bad rap for being somewhat of a mediocre starter since 2017. But that’s not entirely his fault. Green Bay has failed to add talent and depth to the defensive line room, forcing Lowry to take on more snaps than he probably should have.

Lowry does have 79 career starts and 15.5 career sacks, so someone will likely give him more money than the Packers can afford.

With or without Aaron Rodgers, the Packers could take another step back in 2023. So does it make sense to bring back one of the NFL’s most expensive kickers who turns 39 in September?

The answer is probably no. Crosby has been a model of consistency since 2007 and is the franchise’s all-time leading scorer by a remarkable 854 points. But now seems like the perfect time for the Packers to find their kicker of tomorrow.

Reed signed a one-year, $3.25 million deal with Green Bay last offseason. If the Packers could bring him back in that price range, it makes sense to do so.

Ford made six starts when Darnell Savage was benched and was solid with three interceptions and a forced fumble. Ford was also a core player on special teams with 108 snaps.

After bouncing between three teams his first five seasons, Ford seemed to find a niche in Green Bay last year. It would behoove both sides to have him return.

The Packers claimed Hollins off of waivers on Nov. 24. And over the final five games, he had three sacks and nine pressures.

Green Bay is thin at outside linebacker, especially with Rashan Gary’s status uncertain for the start of 2023. Bringing back Hollins on a team-friendly deal makes sense.

This one is simple.

If Aaron Rodgers returns, Cobb has a good chance to be a Packer.

If Rodgers retires or is traded, Cobb’s NFL days could be very well over.

The undersized Leavitt played 308 snaps on Green Bay’s improved special teams — the second-most on the team. Leavitt offers little from scrimmage, but with the Packers placing a greater emphasis on special teams last season, players like him are essential.

Look for the Packers to try keeping Leavitt at a price tag of their liking.

The veteran tight end is another player Rodgers would love to have back. Lewis turns 39 in May, though, had just six catches in 2022 and is a shell of the player he was for 12 years in Jacksonville.

Much like Leavitt, Wilson offers little from scrimmage, finishing the year with nine tackles and a sack while playing just 3.39% of the defensive snaps. But Wilson did play 197 snaps on special teams and was a valuable member there.

Bringing Wilson back at the right price makes sense.

Ballentine was signed to the Packers’ practice squad Sept. 28, promoted to the active roster on Nov. 12 and was a valuable special teams performer from Week 10 on. Bringing him back shouldn’t cost much.

Restricted free agents have three years of NFL service, but expiring contracts. The Packers can place a first, second or original round tender on any of the players. That means Green Bay retains the right to match any contract offer the player would receive from another team or potentially receive draft pick compensation based on the tender used.

Nijman started every game from Week 7 on, although he was benched in the

Nijman has shown the ability to play either tackle spot. And while he’s a mediocre starter, at best, he would be a high-level No. 3 tackles. The Packers will almost certainly tender him.

Barnes started 23 games and had 161 tackles his first two seasons. But after the Packers drafted Quay Walker in the first round last year and Isaiah McDuffie emerged, Barnes saw his playing time dip.

This is a tough one.

Davis played a team-high 346 special teams snaps and another 175 on offense as primarily a blocking tight end.

Davis played for just $895,000 in 2022. If Green Bay tendered him, that number would rise dramatically, meaning Davis probably won’t be back.