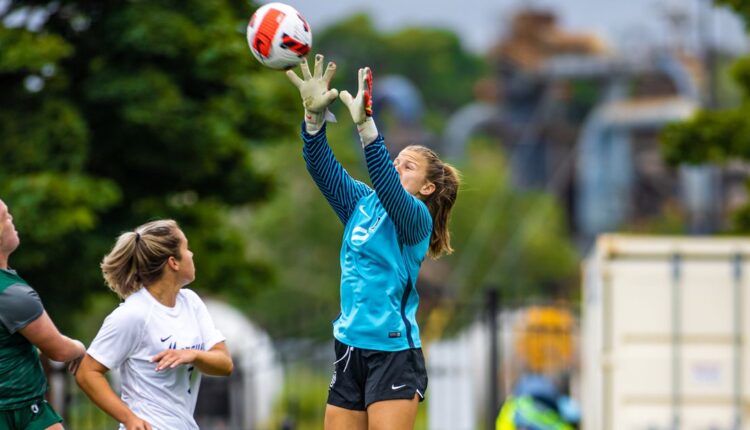 On Sunday afternoon, I settled into my chair at Valley Fields after taking a picture of the first kick to post on the Anonymous Eagle Instagram. [ASIDE: Go follow!] Before I had finished typing the caption on the post, Marquette senior Alex Campana did this:

57 seconds into the match, we had one well laced kick by Mia Haertle, one well played header by Campana, and one misjudged close out by Green Bay keeper Mason Annie, and it was 1-0 Marquette.

fun, huh? Yeah, that was only the start of the goals party for MU women’s soccer on the day as they ended up taking a 5-0 win over the Phoenix. That final tells you a lot about how lopsided the game was, but not the whole story.

Fast forward to the eighth minute — yes, less than seven full minutes later, and Elsi Twombly made this play on an incredibly pass by Hailey Block:

2-0, not even eight full minutes gone, and MU’s first two shots of the game had gone into the net.

Shot #3: Off the foot of Maggie Starker, but saved by Annie.

Is it correct to give Block the helper on that one? She’s the player who struck the shot that hit the crossbar before Kate Gibson’s second try hit low on the crossbar and bounced off Annie’s hands and in.

It was a whole thing. Please remember: Marquette scored their third goal of the season on Thursday in the eighth half of the season. On Sunday, they scored three goals in 23 minutes, all on standard issue “this is how you play soccer” plays. No deflection off a defender as was the case for the first goal of the year, and not a penalty kick either, which is where the 2nd goal of the year came from.

That margin held through halftime, and not surprisingly, as the Golden Eagles could afford to be a bit more deliberate and they were already suffocating Green Bay’s offense. Your shots in the first 45 minutes: 12-2 favoring Marquette.

That’s 4-0 Golden Eagles, and it became clear from that point on that MU was going to win, no matter how many players head coach Frank Pelaez subbed in to the game. [SPOILER ALERT: It was 16 subs.] Shots in the second half? 10-1 favoring MU across the full 45 minutes, and Green Bay’s lone shot came in the 64th minute.

The MU subs made the Phoenix pay as well. Marquette tackled on one final goal in the 73rd minute as freshman Cate Downs took advantage of the unsettled nature of corner kicks to boot the thing into the back of the net for her first career goal. It was a short corner by Marquette played long into the box by Isabella Cook and then headed back towards the middle by Aislinn Boyle where Downs was waiting. The team hasn’t put up a tweet with the video of that one, so you’ll just have to trust me on this one and/or go watch it on the FloFC replay.

That’s how the game ended scorewise, but there is one final thing that we have to note. Chloe Olson made her first career start and second career appearance for the Golden Eagles in this match and played the full 90 minutes in net. She finished with two saves, one in each half, as she had to stop a full two-thirds of Green Bay’s total shots in the game to get her first career clean sheet to put the icing on the cake.

up next: ROAD TRIP! Marquette will be up north next weekend for a pair of matches up in the Twin Cities. It’ll be St. Thomas on Thursday, September 8th, and then Minnesota on Sunday, September 11th. The Tommies are 2-1-1 on the year pending a Monday evening contest at Northern Iowa, while the Gophers are 2-3-1 after beating North Dakota on Sunday afternoon.

Winona State dominates Rangers, but fall 1-0 on the road