Winona State dominates Rangers, but fall 1-0 on the road 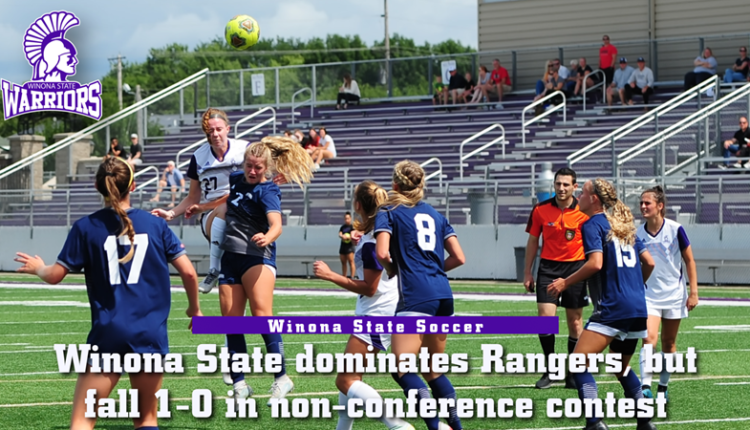 Box Score KENOSHA, Wis. – The Winona State University women’s soccer team had the advantage in almost every statistical category possible in their matchup with the University of Wisconsin Parkside on Sunday, September 4, but the host Rangers were able to make a first-half goal stand up after 90 minutes , handing the Warriors a 1-0 setback.

Winona State held a 19-9 advantage in shots, earned seven corner kicks compared to just one for UWP and carried possession for most the match. Unfortunately for WSU, UW-Parkside’s Alexis Bolger’s goal in the tenth minute of play was the deciding factor in the game, held in front of 300 fans at Wood Road Field in Kenosha.

WSU’s goalkeeper Alyson Jumper tallied three saves in her first start of 2022 and Warrior teammate Grace Seim led the attack for head coach Matt Kellogg, reeling off three shots – two on goal – on the day. Sarah Strating also put a pair of efforts on frame in the game for the visitors. However, Parkside’s goalkeeper Kelsey Gross turned aside all eight Winona State shots on goal and the home side successfully defended all seven Warrior corners. The two teams earned an even foul count, at seven per side, and Winona State held a 5-0 advantage in shots in the second half.

With the victory, Wisconsin Parkside ran their winning streak against Winona State to three consecutive victories; UWP dealt the Warriors a 2-1 loss in 2019 and a 3-1 defeat in 2021. Winona State saw their unbeaten run to start the year halted at two matches and will now take a 2-1 record into their 2022 Northern Sun Intercollegiate Conference (NSIC) schedule.

WSU will start conference play on Friday, September 9 when they travel to the University of Sioux Falls. Winona State and USF are set to kickoff at 2 pm on Bob Young Field in Sioux Falls.