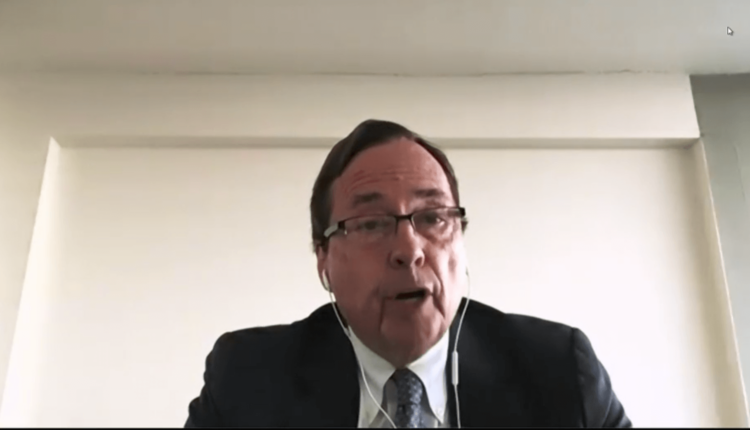 Two Republican members of the Wisconsin Elections Commission said during a meeting Wednesday that they are in favor of adding barriers to the state’s online absentee ballot request system to make it harder for people to impersonate someone else and request a ballot.

The statements came just one week after Racine County Sheriff Christopher Schmaling announced that his office had found a “vulnerability” in the system, known as MyVote, when right-wing activists impersonated others to request the absentee ballots of several people, including Assembly Speaker Robin Vos and Racine Mayor Cory Mason. Requesting someone else’s ballot is a crime. In a Facebook post Schmaling called for the WEC to shut down that portion of the MyVote system to prevent other instances of impersonation.

At the meeting, Democrats on the commission forcefully objected to adding barriers to absentee ballot requests, saying they didn’t want to make it harder for people to access the vote and that the way to discourage these actions is to prosecute the people who have admitted to the crime.

Despite rejecting Republicans’ urging to do something about the alleged vulnerabilities pointed out by Schmaling, the commission did take several actions to encourage the punishment of people who falsely request absentee ballots.

At an emergency meeting last week about the actions of the activists — which include election fraud conspiracist Harry Wait of H.O.T. (honest, open and transparent) Government — the members signaled they’d meet again this week to make criminal referrals against the wrongdoers. On Wednesday, commissioners said they would be unable to make any referrals because to do so the body first needs a citizen to make a complaint against that person.

Earlier this week, the Wisconsin Department of Justice announced that it was investigating the incidents.

Despite the rare consensus on the two votes, the body’s discussion got heated once the Republicans pushed for the changes to the MyVote system.

Republican commissioner Robert Spindell, who has frequently spread baseless conspiracy theories about election fraud and, together with nine other Wisconsin Republicans, posed as a member of the Electoral College to cast a false electoral vote for former President Donald Trump after Joe Biden won Wisconsin, said that the commission should consider requiring voters to provide the last four digits of their Social Security number or driver’s license to log in to the MyVote system.

Spindell also said he wanted to hear “both sides” of the issue before making a decision about whether the perpetrators should face charges. Wait has posted video of himself requesting ballots online and said in multiple media interviews that he knows he broke the law when doing so.

“I want to make clear, from my standpoint, that I’m not going to go ahead and recommend a prosecution until I hear both sides of the issue and also the due process is made available,” Spindell said. “I think we should also consider looking at the problem that we have. I’ve received numerous calls from voters who were amazed, astonished or whatever that they could enter in the system only with a birth date and decide where an empty ballot could be sent. We even heard that it could basically be sent from anywhere. And when this system was set up several years ago, we had all of us where our various website accounts or email have simple passwords. And as such, in airlines, whatever we get, you know I’ve gotten notices you got to change your easy email passwords to something that’s more complicated. So I think over time, as people have gotten more and more sophisticated and figuring out ways to do it. That we need to make our system much more secure in order to obtain the confidence of the voting public. I mean, this is really something that’s out there. There’s somebody who can get in, granted, they’re breaking all sorts of federal laws possibly and state laws and whatever. But I think that we need to recognize this.”

“All I’m saying is like any website, whether it be Amazon, whether it be Delta Airlines, whether it be our AOL account, whether it be whatever, we need more identification, we need a stronger way to do this,” he continued. “Otherwise, I don’t believe we’re going to have a lot of the confidence of the voters of Wisconsin that our system is safe and secure.”

WEC Administrator Meagan Wolfe said that voters don’t provide the last four digits of their Social Security numbers when registering to vote, so it’s unclear how the commission could require that information to log in to the system.

Democrats on the body said they weren’t going to vote for any motion that added barriers to casting an absentee ballot and added they were amazed that Spindell would complain about a lack of faith in the state’s elections after he’s spent the past 21 months claiming the 2020 presidential election was stolen.

“The chutzpah of complaining about a lack of faith in our elections when you’re running around the state holding town halls declaring that the 2020 election was rigged is astonishing,” Democratic Commissioner Ann Jacobs said.