Republicans seek to crack down on bail, set new standards for violent crime 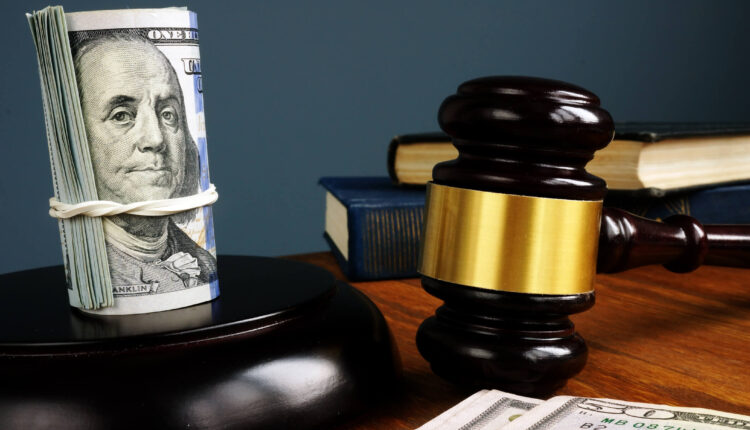 “The average citizen believes that a judge is looking at your past criminal convictions, that they are taking into account the safety of the community, and that they’re looking at the seriousness of your crime,” said Rep. Cindi Duchow (R-Delafield) during a public hearing on Tuesday. “That’s what the average citizen thinks is going on. Well, that’s not what’s going on.”

Duchow spoke during a joint session of the Assembly Committee on Judiciary and Senate Judiciary and Public Safety Committee. Duchow presented Assembly Joint Resolution 1, for an amendment to the Wisconsin Constitution, which she said is needed to prevent accused criminals from being bailed out of jail. Although Duchow said the proposal has been in the works for years, calls for  stricter bail laws have grown louder over the last year. She led the hearing alongside Sen. Van Wanggaard (R-Racine), who chairs the Senate committee and authored the Senate version of the bill.

Under the Wisconsin Constitution, people accused of crimes may be released prior to conviction under conditions designed to assure they reappear in court, protect the community from serious bodily harm, and to prevent the intimidation of witnesses. Among the many conditions a judge may impose, such as remote monitoring, is monetary bail, which is set to assure the appearance of the accused in court.

If passed, the Republican-backed amendment would eliminate the requirement that bail be set to assure the accused appears in court. Instead, bail would be crafted based on “a reasonable basis to believe that it is necessary based on the totality of the circumstances,” the bill states. That could range from whether the accused has been previously convicted of a violent crime, the probability that they won’t appear in court, the need to protect the public from serious bodily harm, the need to prevent witness intimidation, and the potential affirmative defenses of the accused. “This is only violent crimes,” said Duchow in her testimony before the committees. “We’re gonna let the judge look at your past criminal convictions, not just your past history, but your convictions.”

But it is the Republican-controlled Legislature that gets to define what constitutes a violent crime under the measure, as well as  serious bodily harm to the community. “We as a Legislature will then determine what violent crimes are,” Duchow explained, “and add that into statute.” Both Duchow and Wanggaard described numerous examples of people released from custody on bail who committed crimes such as homicide, child molestation and domestic violence. And while those all might make it into the final draft, what the amendment would consider violent crimes or serious bodily harm remains undefined and undrafted. “This is not going to affect misdemeanors, things like shoplifting. This is only violent crimes,” said Duchow.

Back in the early 1980s, the portion of the state constitution concerning bail was amended to the language used today. Committee member Rep. Shae Sortwell (R-Two Rivers), as he questioned supporters of the amendment, appeared to favor the proposal. Sortwell pointed out that the 1980s change seemed to correlate with a rise in incarceration across the state. From his perspective, passing the amendment would simply revert the state constitution back to a better time. “While the people in 1980 thought this was a good idea, and we are going to be able to make this work, it’s not been workable,” said Sortwell. “And so therefore, maybe we ought to go back to what we had before 1980 … basically our original constitution.”

Many in the room both testifying and on the committees themselves, however, weren’t excited at the prospect of dialing back the criminal justice clock to before the  1980s. Some feared that the amendment would jam already over-crowded jails, especially in the state’s most populated city of Milwaukee. Others expressed concerns that the burden brought on by the amendment would fall squarely on low income, Black and brown communities which are historically over-incarcerated. A 2021 report by the Sentencing Project found that one out of every 36 Black residents in Wisconsin was residing within a state prison. It was the highest incarceration rate of African Americans in a country that incarcerates more of its population than any other. 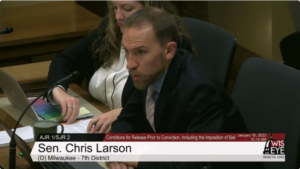 High rates of incarceration and inequity was raised by Sen. Lena Taylor (D-Milwaukee) throughout the hearing. “If everyone does not see the inequality, or maybe even believes that the inequality is just happening, and there’s no reason other than well, that’s just how it happened because those people are more prone to crime,” said Taylor at one point, “There are people who actually believe those things, but may not articulate them.” She was pushing back against speakers who seemed uninterested in discussing the racial equity implications of the amendment. Others, including Rep. Sylvia Ortiz-Velez, emphasized victims’ rights.  Ortiz-Velez wondered what message is sent to a victim when an accused perpetrator was given a low bail.

The issue of bail is multi-layered. On one point,  Sen. Chris Larson (D-Milwaukee) confronted Duchow with a single question: “How much money guarantees the person is moral?” Larson asked. Duchow said she didn’t understand the question. “We’re talking about increasing the amount of bail and taking a person’s pretrial consideration into setting the amount of money that they would have to pay, and then be released,” said Larson. He  pointed to  an example Duchow gave during testimony of a grandfather in her community who was arrested for molesting his grandchildren, and was able to post bail. “Why are we not having a discussion about whether that person should be allowed to be released pretrial?” asked Larson. He suggested the debate should revolve around detaining people based on the risk they present to the community, not whether  they can pay their way to pretrial release. 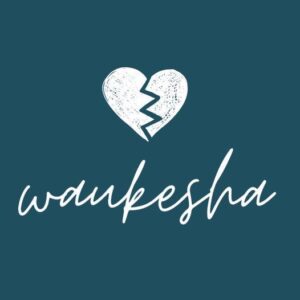 Image courtesy of the City of Waukesha

Among Duchow and Wanggaard’s most prominent examples was now 40-year-old Darrell Brooks. In late 2021, Brooks was released from the Milwaukee County jail on $1,000 bail. He’d been arrested some time before on domestic violence charges. But then the COVID-19 pandemic ground the court system to a halt. This violated Brooks’ right to a speedy trial. A prosecutor who assessed Brooks’ situation failed to use a risk assessment that  would have outlined the danger he could pose to the community. Brooks made bail, and went on to become involved in another domestic violence incident. As he fled the scene of that incident in an SUV, Brooks slammed into the annual Waukesha Christmas Parade. Six people died and over 60 were injured, and Brooks was convicted for all six deaths last  November.

Duchow has repeatedly shamed Milwaukee County for implementing COVID-19 protocols, stating she doesn’t want to help the county. “Well, part of our problem with Milwaukee is because Milwaukee chose to close down for two years over COVID,” Duchow said in an interview. “So, I’m not having a lot of sympathy for the people working in Milwaukee because we were all working out here in Waukesha County, I can assure you that. I would rather have a crowded jail than have what happened in Milwaukee two weeks ago where the judge let the man out who molested a child, two days later he went and killed the mother and burned the mother. So, I would prefer to have crowded jails.” 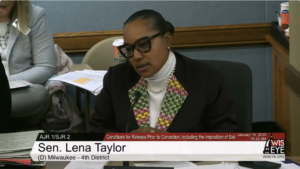 The Milwaukee County Jail, however, is currently over capacity — both  overcrowded and understaffed. In mid-December 2022, a 20-year-old woman died of an “apparent suicide” while in custody at the jail. Over the summer, protesters and the family of a 21-year-old man who also died of an apparent suicide hours after arriving at the jail organized for more transparency and accountability within the facility. Rep. Ryan Clancy (D-Milwaukee) testified before the committee, speaking against the amendment and highlighting the dire conditions within the jail.

“The conditions there are horrific,” said Clancy. “I sampled the food that the folks in our care and custody in Milwaukee were getting a little over a year ago, and it was easily the worst meal that I’ve ever eaten.” Conditions at the jail are deplorable, he added. When the pandemic hit, people went from spending days within the jail to months. Milwaukee County is continuing to struggle with a case backlog caused by the pandemic.

A screenshot of Milwaukee Police Department crime data as it existed on Jan. 10, 2023. (Screenshot | Wisconsin Examiner)

In the meantime, Republican lawmakers and the Wisconsin State Lodge Fraternal Order of Police point to rising homicide rates, car theft and other crimes as reasons to make bail more punitive. The Milwaukee Police Department’s crime dashboard shows there was an 11% rise in homicide between 2021 and 2022. Rape is down by 5%, robbery by is down by 14%, burglary is down by 18%, and car theft by 23%. So far, all of the year-to-date data on the dashboard show improvements from 2021 to 2023.

Duchow and Wanggaard were joined by Wisconsin Fraternal Order of Police Vice President Mark Sette and Waukesha deputy district attorney Michael Thurston in supporting the amendment.. People who testified also outlined a variety of concerns about the amendment, highlighting the overcrowded conditions in the jail and successes other states have had in eliminating cash bail altogether. Rhonda Frank-Loron, director of pretrial services for the Dane County Clerk of Courts and Anthony Jurek of the Wisconsin Association of Criminal Defense Lawyers and the defense lawyers’  president Sarah Schmeiser all testified against, along with  formerly incarcerated Wisconsinites and Adam Plotkin of the State Public Defender’s Office. The American Civil Liberties Union (ACLU) of Wisconsin also filed in opposition to the amendment.

The amendment already passed the Legislature last year with bipartisan support. Before it can go to voters as a ballot measure, it must pass during two consecutive legislative sessions, Republicans plan to bring it up for a vote next week. Duchow suggested the measure could appear as a statewide ballot referendum as soon as April. When citizens get the chance to vote on it, people with certain incarceration records such as felons, who are not allowed to vote in Wisconsin, will have no say in whether the state constitution should be amended.

Eric Church kicking off Summerfest 2023 in Milwaukee with Elle King