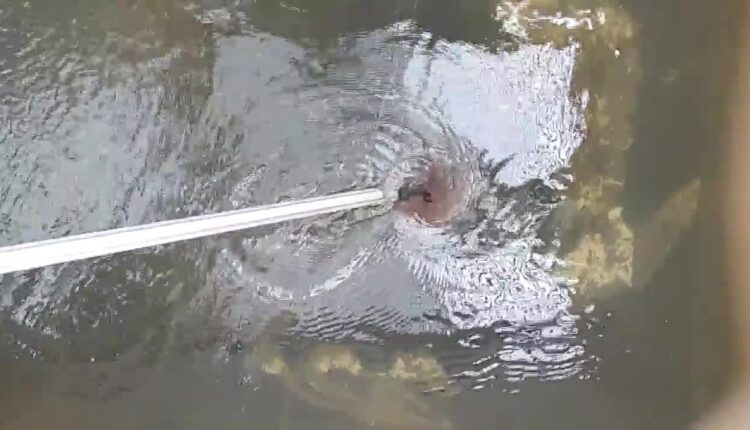 The Kenosha Sport Fishing and Conservation Association (KSFCA) was created in 1970, with a specific request.

“A group of guys got together, pursued the DNR, and said ‘we need a rearing pond for Kenosha’s fishery,” explained KSFCA chairman, Jim Zondlak.

Three years later, a rearing pond was born. The structure sits along the Pike River just off 7th avenue.

Zondlak says the purpose of the pond is to raise baby, or fingerling, Chinook Salmon. They feed them and prepare them for a release into the Pike River, which eventually sends many of them to Lake Michigan.

“They’re raised from an egg at the Wild Rose Hatchery in Wild Rose, Wisconsin. They’re only about an inch and a half long when they come out of the hatchery,” Zondlak said, “We are feeding them three weeks of food to get them stronger, more aggressive, and also a lot healthier because they have more strength.”

Since its creation, the pond has reared between 30 and 40 thousand fish per year, with about 1.7 million salmon calling the Pike River home for nearly 5 decades.

“People from around the United States have come to our downtown Kenosha harbor to fish for the salmon industry,” Zondlak said.

The pond simply creates a good fishing experience for the area, and those benefits roll over to the community.

“If you bring good fishing to the downtown area all summer long, you have good opportunities of growing your business no matter what you do,” Zondlak said.

Richard Matthews echoes that benefit. He owns Musslehead Tackle Shop and specializes in tackle specifically for this type of salmon.

“It’s not even about having a successful business. It’s about seeing other guys have success out there and catch fish they might not normally have gotten otherwise,” Matthews said.

He has been a big help for the KSFCA and the rearing pond, as he believes it has helped him.

“It’s such a gem of a fishery that a lot of people don’t realize is even here for the most part,” Matthews said, “I grew up fishing this lake with my father, and there’s no other place I’d rather be come summertime except chasing king salmon.”

The ponds may look simple to the naked eye, but it’s a complicated contraption. The water must stay below 60 degrees Fahrenheit. They achieve that, thanks to a one thousand foot well that releases ground water, while another pump mixes in water straight from the Pike River, allowing the fish to imprint on their future habitat.

The rearing ponds cost $2,800 a month to operate. Most of the money comes from membership fees and public donations.

“We create a fundraiser banner, we call it, so area businesses will be on the fence, and their name will be quite publicized through social media,” Zondlak said, “I think if we keep it local and keep it convenient, we get more publicity that way and more interest in helping us.”

That interest in the rearing ponds has spread from business owners like Richard Matthews to charter companies, and even local tournament anglers, like Steve Ruppa and Niki Zawacki.

“It’s just this big circle and community of people where you end up knowing everyone, and end up giving a hand and getting involved,” Ruppa said.

“It’s a future for fishing. It ensures that generations after us are going to be able to come out here and catch a 20- or 30-pound chinook salmon. It gives life to the lake,” Zawacki said.

To keep these waters alive and safe, some work needs to be done quickly.

The changing climate is causing erosion on the Pike River, and without help it could threaten the safety of the fish that are released here.

“We’re working on restoring the banks of the Pike River. The Pike River is a very fast river. When it rains it comes up quick and high and it gouges out the banks,” Zondlak explains.

In response, a few organizations, such as Root-Pike WIN and Stand Associates are helping with a restoration project for the area.

In addition to restoring the banks, they plan to add more native grasses and species, ADA-accessible balconies, kayak launches, and educational resources, overall glamorizing the rearing pond area of ​​the Pike River.

“We want people to come here and have a day out of it. Right now, there’s not much room to have a day out here. It’s not as pleasant as we want it to be, but we’re going to make it a lot better than what it is,” Zondlak said.

The project would also create a more protective structure for the ponds. The funding is secured, and they hope to finish the project in 3 to 5 years.

“People don’t know about it, and it’s a special thing. If it’s more accessible and inviting to people, it can only help bring people into the hobby,” Zawacki said.

Kenosha’s fishing industry is a hobby focused on making memories and helping the local environment.

“If we don’t take care of what mother nature has given us, we will lose it,” Zondlak said.

The KSFCA’s hope is that bringing awareness to this will get more fishing-lovers on board to keep the rearing area running.

“This needs to have a next generation of people to take over. This is not just a bunch of weekend guys. This is a commitment to our conservation,” Zondlak said.

You can read more about the Salmon Rearing Pond HERE.

Click HERE for more details on the design and restoration process.