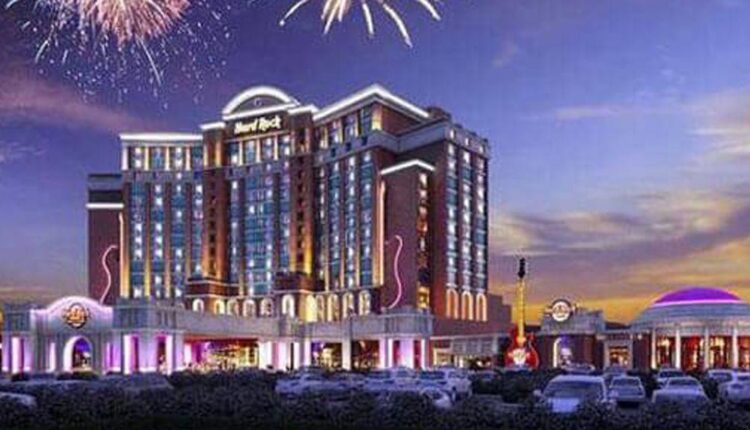 This is an image of the proposed Kenosha Hard Rock Casino, an $800 million project which included a convention center and hotel which was denied by Gov. Scott Walker on Jan. 23, 2015, after it had been approved by two local referendums, and by the U.S. Bureau of Indian Affairs in Washington, D.C.

The project had bipartisan support from southeast Wisconsin’s lawmakers and municipal leaders. The Menominee Indians in Wisconsin had sought the project, which was strongly opposed by the Potowatomi, which has a casino in Milwaukee.

The state’s potential liability to the Forest County Potawatomi Community if a proposed Kenosha casino becomes a reality would be significantly reduced because of a gaming compact amendment approved a few years ago, according to a new analysis released Wednesday.

The analysis, prepared by the Legislative Reference Bureau and released jointly by State Sens. Bob Wirch, D-Somers, and Van Wanggaard, R-Racine, found the “financial risk to the state is not as great as during the 2013-15 deliberations.”

“Since Gov. (Scott) Walker rejected the Kenosha casino, the state agreed to a 2018 compact amendment with the Potawatomi that significantly reduces the state’s liability if a casino opens between 30 and 50 miles from the tribe’s Milwaukee casino,” according to the analysis.

The analysis stated that the most significant part of the 2018 amendment provides mitigation for possible revenue losses only on a going forward basis through a potential reduction in future payments and that the state would not be required to refund any of the tribe’s past or future payments.

The Potawatomi had claimed in a 2015 federal lawsuit that the state would need to refund to them an estimated $243 million if the then proposed Kenosha project was approved in Kenosha. The Potawatomi operates a casino in Milwaukee.

“Most significantly, the 2018 amendment provides mitigation for revenue losses only on a going-forward basis,” according to the analysis. “In other words, unlike in the 2014 arbitrated amendment, the state would not have to refund the tribe for any of the tribe’s past payments to the state.”

The analysis of the 2018 compact amendment also found that the Potawatomi cannot legally withhold annual state payments until it proves actual losses as a result of a casino within 30 to 50 miles of the Milwaukee casino. However, the Potawatomi could place disputed payments into an escrow account pending a final, legal determination, according to the 2018 compact amendment.

The analysis also referenced the needs of the Menominee people and stated that the tribe’s home county “regularly reports the highest rate of poverty and unemployment as well as the lowest ratings of health outcomes.”

“One of the stated reasons mentioned in rejecting the Menominee’s Kenosha casino project was putting the state at risk for repaying millions of dollars,” Wirch and Wanggaard said in a statement with the release of the analysis.

“With this new examination of the amendment approved between former Gov. Walker and the Potawatomi, there is significantly less financial risk to the state in approving a Kenosha casino. Now, there are even more reasons to support the Menominee’s effort to team up with Hard Rock International to develop and build a destination entertainment center and casino in Kenosha.”

An affiliate of Hard Rock International plans to purchase nearly 60 acres of land located southwest of Interstate 94 and 60th Street from the Village of Bristol. Through an earlier agreement, however, the land is in the city of Kenosha.


They said this “puts this issue to bed once and for all.”

“The new amendment eliminates the main claim that was the basis for rejecting the earlier plan,” they added.

Wirch and Wanggaard also noted that up to four other casinos will soon open or have opened in an area near the proposed Kenosha casino, but beyond the 50 mile mark, including current and future projects in Beloit and in Waukegan, Chicago and Rockford, Ill., and an already open casino in Hammond, Ind.

“The new casinos in Illinois and Indiana and the one planned for Beloit will change the competitive landscape of the entire gaming market in Wisconsin and make it nearly impossible to prove which, if any, casino impacted the Potawatomi’s Milwaukee traffic,” they added.

“This provides even more protection for state taxpayers and is another reason to approve the Kenosha project. … The 2018 amendment with the Potawatomi protects the state and further bolsters the case for approving the Menominee-Hard Rock Kenosha project.”

The two senators said the “time has come to move the Kenosha casino project forward and approve it” because it’s good for Kenosha; it’s good for Wisconsin; and it’s good for the Menominee Tribe.”

Earlier this month, a poll commissioned by the Menominee Indian Tribe’s gaming commission found the majority of Kenosha County residents support a Hard Rock International casino on the city’s west side.

According to the survey conducted by the Tarrance Group in September, a proposed Kenosha casino has even higher support levels in the four-county region that also includes Racine, Waukesha, and Milwaukee counties.

Based on the poll of 600 regional residents, support for a project in the area was 60% in favor and 15% opposed.

In July, the Menominee tribe announced it was partnering with Hard Rock International to relaunch the tribe’s efforts to open an entertainment center and casino on the west side of the City of Kenosha. The land was formerly in the Village of Bristol.

Menominee would own the casino and its related facilities, and Hard Rock would serve as developer and manager of the project proposed just west of Interstate 94 on about 60 acres of land.

“Hard Rock has a long standing partnership with the Menominee Tribe and is proud to support them in their continued efforts to bring a world-class gaming and entertainment resort to the Kenosha community,” Hard Rock International COO Jon Lucas said in a statement at the time. The Seminole Tribe of Florida owns Hard Rock International.

Hard Rock International had previously planned to partner with the Menominee to develop an $800 million hotel and casino at the former site of Dairyland Greyhound Park in Kenosha. The plan, however, was rejected by Walker in 2015. Walker at the time said the project could leave the state owing a rival tribe hundreds of millions of dollars.

In accordance with federal law, the governor had sole, final authority to approve or reject this proposal.

At the time, Walker, a Republican, was also mulling a 2016 presidential run but maintained that his decision had nothing to do with politics.

Earlier this summer, a spokesperson for Gov. Tony Evers, a Democrat, said his office was noncommittal about the newest proposal.

On Wednesday afternoon, Menominee Indian Tribe of Wisconsin Chairman Ronald Corn Sr. said that if approved the Kenosha casino would help attract more visitors to the area, many of whom would spend money locally.

He said a casino would also greatly benefit the tribe.

“As one of the largest and poorest tribes in Wisconsin, the LRB analysis notes that our people regularly endure the highest rates of poverty and unemployment in the state as well as the lowest ratings of health outcomes. Our goal for this major economic development and tourism destination project is to invest in improving and expanding access for our tribal members to health care and education and devote more resources to fighting poverty, hunger, and unemployment on our reservation,” Cord said.

“This important report adds to the growing groundswell of support for the Kenosha casino and destination entertainment center project, and the Menominee looks forward to further discussions with the community and interested stakeholders who want to help get this project across the finish line.”

State-by-state comparisons reveal where casino dealers earn the most

States with the highest-paid casino dealers

Much like casinos themselves, casino dealing is, for many people, a job shrouded in mystery. Casino dealers are responsible for dealing cards, dropping the roulette ball, distributing dice, and monitoring the pot to ensure no one steals or cheats. To become a dealer, one must complete a casino dealing training course, which entails learning the intricacies and rules of each game, what local and state gambling laws are, and how to spot cheaters. Depending on state regulations, dealers may need to obtain a state or municipal license before they can begin working. Being a good dealer also means you need to be a people person, quick at math, and skilled at facilitating games.

But, much like other service industry jobs, dealers often receive a somewhat low base salary, and tips from players can make or break income. Hourly wages vary greatly among states and even among casinos, and tips can fluctuate drastically based on location or the whims of players. In San Francisco, for instance, dealers can take home $125,921 a year, which is 50% above the national average salary for a casino dealer

PokerListings explored casino dealer salary rates to determine which state has the highest-paid employees, using data from Bureau of Labor Statistics’ (BLS) Occupational Employment and Wage Statistics report from May 2020. Only 33 states report employees of this category to the BLS. Three of them—Connecticut, New Jersey, and Pennsylvania—don’t report wages and were dropped from the analysis. The remaining states were analyzed based on the hourly mean wage as reported to the BLS. Employment numbers are estimates.

This story originally appeared on PokerListings and was produced and distributed in partnership with Stacker Studio.