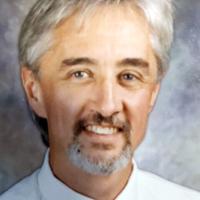 Robert “Bob” Gwinnup was born in Indiana on July 31, 1955. He passed to his heavenly home on December 13, 2022, at Froedtert Menomonee Falls Hospital surrounded by family.

Bob met the love of his life, Peggy, at Anderson University in Anderson, IN. Peggy and Bob married on May 26, 1979.

Bob was a father, and grandfather, a jokester, educator and coach. He worked for KUSD as a School Psychologist for many years and volunteered coaching wrestling and basketball for Jefferson and Curtis Strange Elementary Schools. Bob was also awarded the Distinguished Service Award from KUSD.

Bob was an active member of Kenosha Family Church, where he was greatly loved. Besides his work through the church, he volunteered as a Big Brother to three different boys over the years.

Bob loved to both pull practical jokes and tell jokes. He was always looking for a laugh. A highlight of his was when he would don a mask to jump out and scare his children and sometimes even friends! Bob also brought joke books to school as he would love to get his students laughing.

Bob was a huge baseball enthusiast and enjoyed traveling to see minor league teams, especially the Kingfish; The Field Of Dreams in Iowa, and The National Baseball Hall of Fame in New York. He also adored his canine companions and often could be seen with them cruising around town.

Bob lived a wonderful and full life, which was ended too soon. Bob will be greatly missed by family and friends alike.

Bob’s family would like to invite his friends and family to a Celebration of Life that will be held at Kenosha Family Church, 3910 27th Street, Kenosha, WI on January 7, 2023, at 1:00 pm

Milwaukee Bucks defeat Jazz despite no Giannis or Khris Middleton