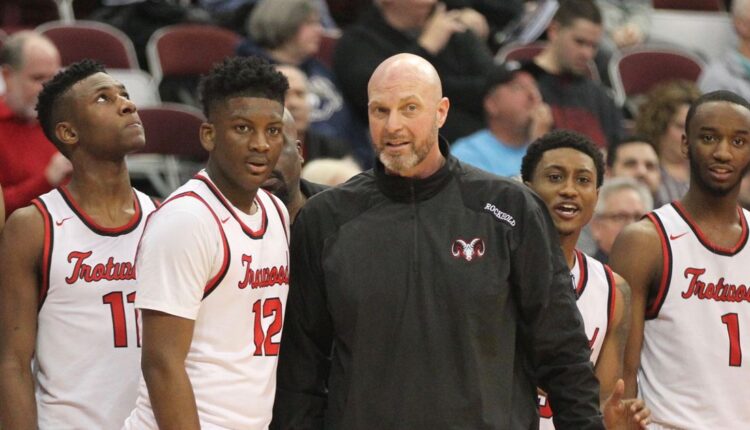 Rockhold won over 300 games and his most successful stretch with the Rams was a three-year run that culminated with the 2019 Division II state championship at the Schottenstein Center in Columbus. The high scoring No. 1-ranked Rams, led by state player of the year Amari Davis, rallied from 11 down in the second half, finished on a 17-5 run and survived a tense final two minutes to defeat Columbus South 77-73 and finish 28-2 . In 2017, the Rams lost in the state semifinals to Akron St. Vincent-St, Mary and again to the Irish the following year in the final. Rockhold’s 2014 team also went the state final four. He said that team was mostly football players and undersized and was one of his staff’s best coaching jobs.

“Anytime you can walk away and say we won a state championship and played in multiple final fours, that feels pretty good,” he said. “The state championship is one thing that never goes away, especially because it was the school’s first in basketball. It holds a special place for a lot of folks in Trotwood, and it will always hold a special place for me. You couldn’t ask for a better group of guys to be around and coach.”

The title team holds the state record for most points scored in a season and averaged 100 points a game.

“They were a group you could put your thumb down on and really push hard, and they’d give you everything they got,” Rockhold said.

Rockhold grew up next door to, played for and coached under Bill Green at Greeneview playing a much slower style. But as a college player at Mount Vernon he played a running and trapping style that he believed would work at Trotwood.

“We had guys who could run and jump and they were athletic,” Rockhold said. “And we really just felt like if we could get them to buy into playing hard – because you have to play hard if you’re going to play that way – we felt like the sky was the limit for us.”

Despite the style of play being different from his formative years at Greeneview, Rockhold said he learned a lot from Green, who he thinks of as a mentor, about running a program and what the most important things are about being a coach.

“Being able to be around the kids that we were around and be able to build the bonds that we build,” Rockhold said is the best thing about his time at Trotwood. “I can’t tell you how many of the players have reached out and said, ‘Coach Rock, really? What’s going on?’ I’ve gotten some calls and people say, ‘I’m really sorry to hear this.’ Don’t be sorry. It was a decision that I made.”

The $18,000 Breast Biopsy: When Having Insurance Costs You a Bundle