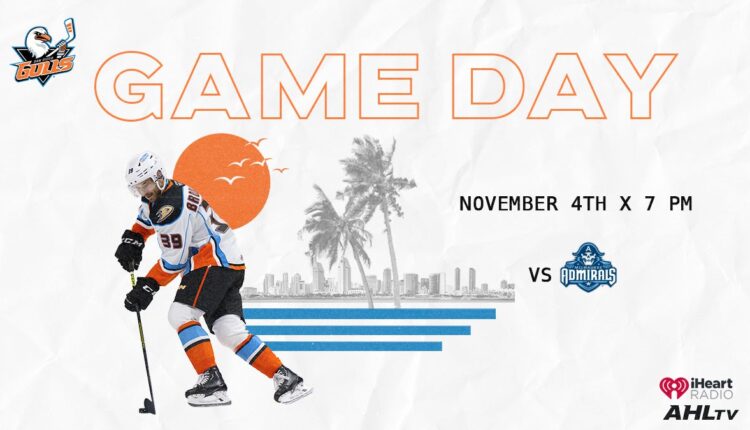 The Gulls come back to San Diego following a 3-2 loss to the Bakersfield Condors on Wednesday night. The team battled hard, but a late push fell just short. Now, they must face an Admirals team that enters tonight on a four-game win streak.

Consistency will be key for the Gulls. With a disciplined Milwaukee team on tap – their 48 PIM is the second-fewest in the American Hockey League – San Diego knows it must compete at even strength to find success.

One player for San Diego who is embracing consistency is goaltender Luke Dostal. He’s stopped 83 of the last 88 shots he’s faced, posting a .943 save percentage (SV%). His play is a great reason why the Gulls enter each game with an advantage in net.

Joining Dostal with a consistent effort is Gulls forward Danny O’Regan, who extended his point streak to five games with an assist on Wednesday. Additionally, Gulls forward Rocco Grimaldi is now riding a four-game point streak, while forward Bo Groulx has 1-3=4 points in four games. Both O’Regan and Grimaldi are currently tied for second in points on the Gulls with nine.

However, the Admirals also have players on streaks of their own. Forward Mark Jankowski is on a five-game point streak and leads his team with 5-4=9 points. In addition, forward Phil Tomasino is on a four-game point streak. It will be imperative for San Diego’s defensive core – a group that saw Jarod Hilderman make his AHL debut Wednesday—to limit their opportunities.

While the two teams don’t frequently play each other, San Diego brings a history of success into tonight’s matchup. The Gulls have a five-game win streak over the Admirals, with three of those coming at home. It will be a tough matchup, but the team is excited for the challenge.

“We have a resilient group, we’ve just got to show it,” Gulls forward Hunter Drew said. “It’s pretty early in the year – we’ve got lots of time – but hopefully, it comes quick.”