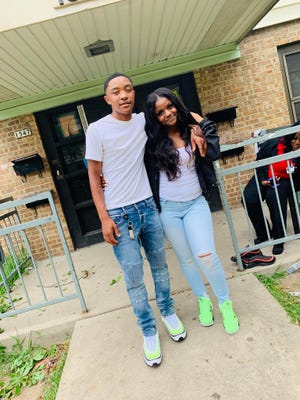 Tyler Anderson and Cordaejha Brown were as close as any young couple could be.

They exchanged text messages and spent hours on the phone. Anderson often spent time hanging out at her house, watching TV.

That was the plan early Wednesday when Anderson was headed to Brown’s south side home.

He promised to call to let her know when he was outside her house. Brown fell asleep on the couch waiting for that call.

“I texted him and I was like, ‘What happened to you.’ No response,” said Brown, 18, a senior at Golda Meir High School.

She thought maybe he went back home to his mom or changed his mind about coming over.

A good feeling told her something wasn’t right. She began checking Facebook and saw images of a car wreck on Interstate 43. Brown said Anderson normally doesn’t take the highway to get to her house.

Brown thought the car resembled Anderson’s black Honda Civic, but she couldn’t quite tell. She began to think the worst, though her mother urged her not to.

“I texted him and I was like, ‘Please call me. You got me overthinking.’ And that was my last message to him,” she said.

A post from one of Anderson’s cousins ​​and a phone call from one of his friends confirmed Brown’s worst fears. Anderson had been killed along with another driver in a wrong-way crash on I-43, just south of South Chase Avenue.

“I just broke down,” said Brown, a friend since childhood, who Anderson had been dating off and on for the last five years.

The crash on I-43 is still being investigated

The investigation into the crash that killed Anderson and 27-year-old Ivy Caldwell continued Friday. A preliminary investigation by the Milwaukee County Sheriff’s Office determined the crash occurred shortly before 2 am Wednesday, just south of South Chase Avenue.

Caldwell was driving north in the southbound lanes when she hit Anderson in a head on collision. Sheriff officials were still trying to determine where Caldwell entered the highway. The accident shut down traffic for hours Wednesday morning as officials investigated.

The Milwaukee County Medical Examiner conducted toxicology tests on the drivers to determine if alcohol played a role in the crash.

Tyler’s mother, Kassandra Anderson, declined to comment when reached by the Journal Sentinel Thursday, saying she was grieving her son’s death.

‘He has a big heart’

Brown and Anderson met when she visited her older sister, who at that time lived in Hillside. Anderson’s mom lived in the same neighborhood. She was 8 years old and Anderson was a year older, but they often played together.

Back then, Anderson used to playfully tease her. As they got older their friendship evolved. Anderson wanted to further their relationship when she became a high school freshman, but she was hesitant. Brown looked at Anderson more as a brother.

“I was always afraid that it was going to mess up our friendship,” she said.

“He was the first one who told me he loved me literally,” she said. “I always thought boys would say that to get in your pants. But after a while, I realized that Tyler was never like that. He genuinely really had love for you.”

As Brown prepares to graduate, her thoughts linger on all the plans that won’t come to pass. She said Anderson was looking forward to seeing her walk across the stage to receive her diploma.

“That’s all he talked about,” she said.

Anderson had plans of his own. He wanted to move to Arizona and start a trucking company with his mother. Brown, who described Anderson as a momma’s boy, said he always wanted to look after his mother.

“That was just him,” Brown said. “He had a big heart. His momma was the number one person. That was his everything right there.”

That’s what she liked most about Anderson.

“He was so selfless,” she said. “He would put everybody before himself. That’s what attracted me the most because I liked that in him. He always put his momma, siblings and people around him first.”

When asked what she’ll miss about him, she responded with one word.

“Everything,” Brown said. “That’s all I can say. He’s gonna be truly missed by everybody.”