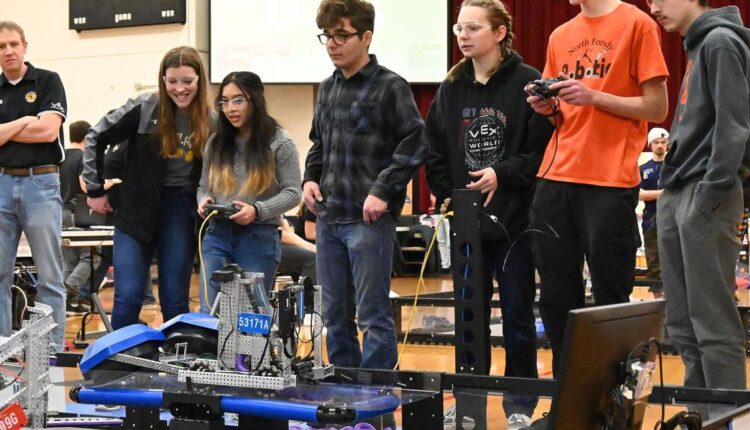 FOR THE KENOSHA NEWS

The tournaments will showcase the skills of a range of student competitors from elementary, middle and high schools from across Wisconsin. It is the largest robotics tournament in southeastern Wisconsin. The tournaments are expected to feature a record number of participants.

Admission is free and open to the public.

The fifth annual VRC Tournament will run from 9 am to 5 pm on Saturday. Tournament play consists of 32 high school teams, each with three to eight members. Competitors play a VEX Robotics Competition (VRC) game called “Spin Up” on a 12’x12′ square field.

Billed as “the most exciting two minutes in robotics,” two alliances – one “red” and one “blue” – composed of two teams each, compete in matches consisting of a 15 second autonomous period, followed by a one minute and 45 second driver-controlled period. The object of the game is to attain a higher score than the opposing alliance by scoring discs in goals, owning rollers, and covering field tiles at the end of the match.

In “Slap Shot,” two robots compete in the teamwork challenge as an alliance in 60 second long teamwork matches, working collaboratively to score points. Teams also compete in the robot skills challenge, where one robot takes the field to score as many points as possible. The matches consist of driving skills matches, which will be entirely driver controlled, and programming skills matches, which will be autonomous with limited human interaction.

Shoreland expects to host over 700 participants and spectators over the course of the two days. These events are made possible by legacy sponsor, Kwik Trip, as well as other major event sponsors: Wisconsin Lutheran College, Carthage College, Gateway Technical College, Excel Engineering, and Catalyst Construction.

Teams will participate in up to seven different tournaments throughout the season. Shoreland will send their top three teams to compete at the Northeast Wisconsin VRC Showdown in February held at Lambeau Field in Green Bay against teams from around the country.

The 2023 Wisconsin State Championship will take place at the Resch Expo in Ashwaubenon for all teams who qualify. Teams who could qualify attend the Create US Open Championships in Iowa in March and the World Championships in Dallas in April.

Many of the participants in the Shoreland Robotics program are part of the engineering or computer science pathways in Shoreland’s STEM Academy.

The STEM Academy at Shoreland Lutheran High School was recently recognized by Project Leading the Way as a Distinguished High School for the third consecutive year. Shoreland is one of only 23 in the state and one of 191 in the country to receive the distinction.